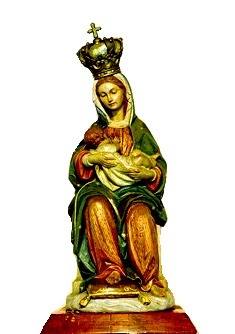 Devotion to Mary under the above title is one of the most ancient of all Marian devotions. It was the city of Madrid, in Spain, that became the scene of its popularization.

During the Spanish wars which occasioned the people to seek refuge in the New World, a looting soldier carried off a statue from one of the shrines in Madrid. The image was a beautiful little statue that depicted Mary cuddling at her breast the Infant Jesus whom she was lovingly nursing.

A poor peasant returning from the fields after making a visit to the shrine, recognized the statue in the possession of the drunken soldier. He bought the statue for a small sum of money, and carried it home to enshrine it in his humble cottage. It chanced that this man’s wife was nearing childbirth, so daily the couple knelt before the statue begging the Mother of God to give the expectant mother a safe delivery.

As the days passed, it was evident that there were difficulties, and that the wife of the poor peasant was certainly threatened with death. The father prayed most fervently before the image of Mary for his wife’s safety. His confidence was rewarded by a happy delivery vouchsafed by the Little Mother, as he lovingly referred to the statue. He named the statue accordingly, the Mother of Safe Delivery, which also became known as Our Lady of Deliverance.