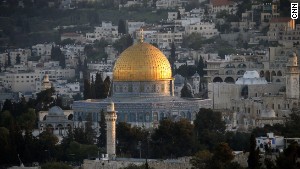 When I was a teenager in the 1970s, I attended a “Bible church,” a nondenominational congregation that prided itself on a singular devotion to scripture. We read the Bible all the time: in personal Bible study and evening Bible classes. We listened to hourlong Sunday morning sermons. For us, the Bible was not just a guide to piety. It also revealed God’s plan for history. Through it, we learned how God had worked in the past and what God would do in the future.
+

Central to that plan was Jerusalem, the city of peace, and the dwelling place of God. It was special to the Jews because it was the home of Abraham and David. It was special to us because it was where Jesus had died and risen. We believed that ultimately, Christ would return to Jerusalem to rule as its king. We longed for this outcome — and we prayed that human history would help bring about this biblical conclusion. Jerusalem was our prophetic bellwether. God’s plan hung on its fate. Whenever Israel gained more political territory, whenever Israel extended its boundaries, it was God’s will, the end-times unfolding on the evening news. Jerusalem, as the spiritual heart of Israel, mattered. Jerusalem was God’s holy city, of the ancient past, in its conflicted present, and for the biblical future.