Question: Is there an invisible pandemic, as well as the one, Covid-19, we know only too well ?

Next question: Is there also another? Might there be two ongoing health scourges?

Not long ago, President Joe Biden said he believed the Covid-19 pandemic was “over” (in an appearance on CBS’ “60 Minutes”), but reportedly acknowledged the U.S. still has a “problem” with the virus that has killed more than one million Americans. (“The pandemic is over. We still have a problem with Covid. We’re still doing a lot of work on it. It’s – but the pandemic is over,” he said.)

The view is understandable — but only on a surface level.

For there are indeed two pandemics in progress. Neither makes the news as often as perhaps they should; both are often under the radar.

One is the spread of Omicron variants.

In some nations, and areas of North America such as the New York-Connecticut corridor, there is a recent upsurge, with covid jumping by twenty percent or more. While not nearly as deadly as the original Wuhan virus, it is taking a quiet toll nonetheless (prayer need).

Part of that toll is not yet reckoned, for it may largely be in long-term effects. Indications are that in some cases, even a person who suffers little more than the sniffles or even no symptoms at all may be prone to long-term effects.

Months after the infection, there can be fatigue, brain fog, cough, shortness of breath, and even emotional repercussion.

With prayer, much, if God so wills, can be mitigated.

But it leads us to the second question:

In addition to a new “pandemic” of variants, is there also a pandemic of what has become known as “long-covid” — “post-acute sequelae of SARS CoV-2”? Can a chronic condition ensue — whatever the variant, and no matter the original symptoms, or lack thereof?

There is much evidence that this in fact is occurring and at an accelerating rate, making it all the more important to eat healthily and partake of adequate zinc, vitamin C, and vitamin D-3 (as well as that prayer).

If you’ve noticed a sea change in psychological attitudes of late — in yourself as well as others — this, we are told, can be related to long-term covid, which is officially recognized as playing with the emotions.

It can lead to depression, indifference, and anxiety, in addition to the simple emotional effects, upsets, and burden of the pandemic itself.

In some, those effects resemble post-traumatic stress syndrome, usually seen in military combat (though perhaps not in those who spend adequate time each day in prayer, which leaves us with no fear). Are we not in a time, at so many levels, of combat? (Have you noticed a change in attitude in those around you?)

As for the physical effects of long covid, here we get into an area of real concern.

View the video at the bottom of a Yale physician who knowledgeably deals with chronic effects. She is not just another doctor making a YouTube  and presents a sobering picture of what can occur.

It is the subject for more prayer: real debilitation, from insomnia and brain fog to serious heart problems and nervous disorders extreme enough, in some cases, to prevent a person from working or even walking.

Though not always a fully reliable source, the World Health Organization believes that between ten and twenty percent of Covid-19 survivors exhibit lasting symptoms including breathlessness and cognitive dysfunction that can persist long after the acute infection has resolved. There is no test for long Covid. Its precise causes remain mysterious and little is known about how it interacts with other medical and physical conditions.

Between 7.5 million and twenty-three million Americans are estimated to have developed chronic Covid.

All of this, by the way, is not to frighten but set forth prayer targets and to exhort everyone in earshot to adopt healthy lifestyles that can offset potential effects.

For by now, for all we know, to one degree or another, virtually everyone, save for the isolated hermit, has been infected.

The prayer need includes that future variants not erupt that are more dangerous even than the “original.”

There are quotes around “original” because skepticism lingers that the virus started when officials say it did. We harbor concerns that it was around for months or even years before it mutated into such a violent variant as to cause the effects we witnessed in Wuhan and New York.

We have history as a reference:

Precisely that occurred with the Great Influenza of 1918-1920. 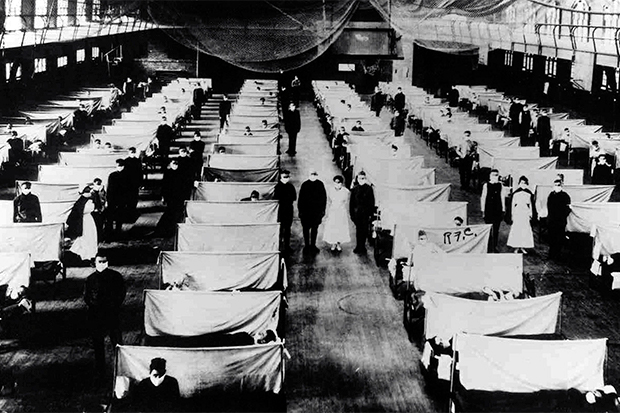 That pandemic, responsible for killing two of the three Fatima visionaries, began, it’s believed, at army training camps in Kansas before spreading to Boston, Philadelphia, then into France, mutating in the process into a potent pathogen that killed between fifty and a hundred million around the world, in virtually every corner, as has covid.

Called H1N1, it was the last major pandemic (1.75 million dead in the U.S., versus one million for covid, in a larger population).

Both have borne many similarities in the bizarre array of effects on the body.

Like covid, just about every organ was susceptible to impact from H1Ni, which likewise caused health issues long after initial infection.

How about this description, from a definitive book called The Great Influenza by John M. Barry:

“The clinicians now looked to explain the violent symptoms sailors presented. The blood that covered so many of them did not come from wounds. Most of the blood came from nosebleeds. A few sailors had coughed blood up. Others had bled from the ears. Some coughed so hard that autopsies would later show they had torn apart abdominal muscle and rib cartilage. And many of the men writhed in agony or delirium; nearly all those able to communicate complained of headache, as if someone were hammering a wedge into their skulls just behind the eyes, and body aches so intense they felt like bones breaking…”

The extraordinary array of symptoms was previously unknown in influenza or experienced with far less intensity.

There was loss of smell. There were pockets of air that accumulated just beneath the skin. There were reports of blood sometimes spurting from the nose with enough force to travel several feet. One recalls that this event served as an afterword to those Fatima secrets announcing the end of World War One but the danger of another, which indeed came as what we now call World War Two. It turned out that the 1918 pandemic was a warning. (More on this during the retreat.)

Like the current pandemic, there had been the mandatory wearing, in many places, of masks; a race to find a vaccine or curative serum; and limits on travel (though not as restrictive as during a polio outbreak, when travel was banned in New York). Churches were forced to close.

At first it had been a severe flu in cramped military quarters, lightened a bit as it spread, then grew more virulent. It mutated constantly.

The children of women exposed during pregnancy to the 1918 influenza suffered elevated rates of heart disease sixty years after the pandemic, and according to Barry, “it also left a trail of lowered vitality… nervous breakdown, and other sequella (effects).”

President Woodrow Wilson was among the victims. He contracted the virus during the Paris peace talks, and instead of dying from a stroke, which was commonly thought, it is believed by many researchers today that what he eventually succumbed to was the flu — “long H1N1.”

It was noted by those close to him that he lost his vigor and even became paranoid, believing that his home was filled with French spies. In short, there were emotional, psychological, and spiritual effects.

Is a “pandemic” of paranoia and oppression now sweeping the U.S. and other nations? “One thing was certain,” said his chief usher, Irwin Hoover. “He was never the same after this little spell of sickness.”

There was a trail of lowered vitality in the entire population (as many now see, including among our young) and nervous breakdowns.

Months after “recovering” from his illness, the famed poet Robert Frost wrote, “I don’t know whether or not I’m strong enough to write a letter yet.”

The health commissioner of Cincinnati noted a year after the epidemic that phrases like “I’m not feeling right” or “I don’t have my usual pep” were commonplace.

Years after, a disease known as “encephalitis lethargica” spread through much of the western hemisphere The consensus was that it wasn’t a new pathogen but the result of influenza.

And though it eventually settled into a less acute illness, the influenza continued to strike.

We see the parallel today.

“U.S. health regulators on Friday estimated that BQ.1 and closely related BQ.1.1 accounted for 16.6% of coronavirus variants in the country, nearly doubling from last week, while Europe expects them to become the dominant variants in a month,” reported Newsmax last week.

Prayer need indeed: what will other variants be like: mild as the 1918 influenza eventually became, or a wild card (especially if the coronavirus was meddled with in a plan)?

Notes a Boston television station: “XBB, the new so-called “nightmare” COVID-19 variant, is spreading rapidly in parts of the world and has already made its way to the U.S., researchers say. XBB is a variant of omicron and has been dubbed the ‘nightmare variant’ in Singapore. It is extremely immune evasive and has also shown that it might be immune to current vaccines.”

In the U.S., we are currently seeing strange illnesses in the young, including rampant absences from schools in Sacramento and abnormally high flu absences in Virginia — for all we know, related in some way to the covid outbreak; or perhaps just the annual attack of influenza, expected this time of the year; entirely unrelated.