If you’ve seen any articles on China lately, you may have wondered at the extreme measures to contain the omicron variant of coronavirus, even though signs are it’s milder.

We ask this after seeing an article in the London Mail [caution, tabloid]. 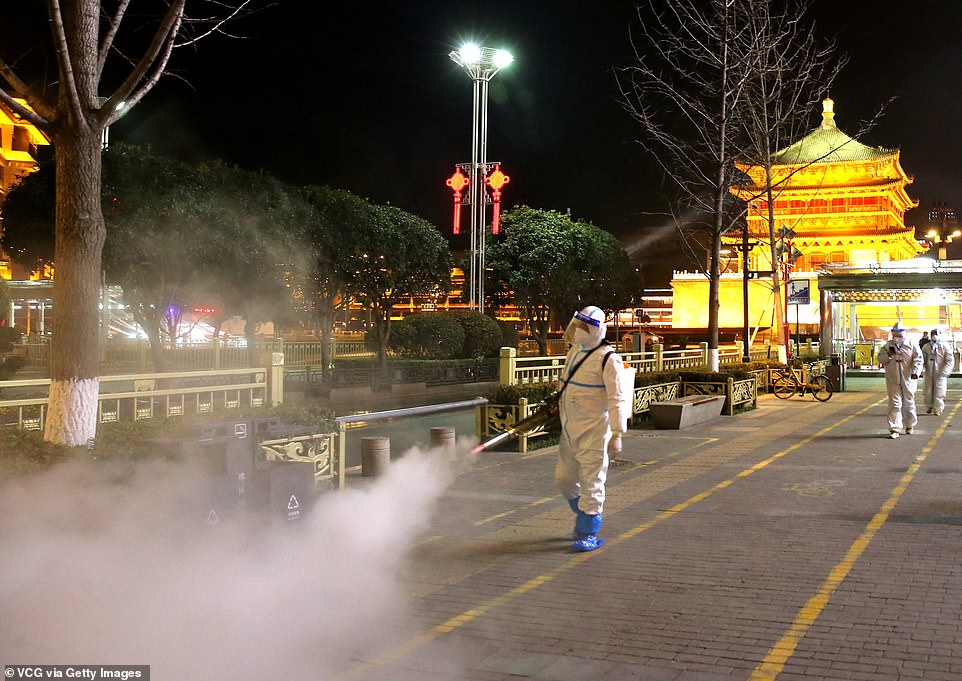 Above, workmen disinfect a street in the city of Xian (population, thirteen million), which is currently in a severe lockdown.

“Restrictions were toughened on Monday as Communist officials imposed a driving ban with the threat of 10 days in jail for anyone caught behind the wheel,” reported the newspaper Tuesday.

“Beijing has ordered roads, buildings, and open spaces to be disinfected in the Chinese city of Xian as it upgraded lockdown restrictions to their ‘strictest level’ today,” says the Mail. “Xian’s caseload — 150 on Sunday versus 155 a day earlier — remains tiny compared with many clusters overseas, but Beijing has moved rapidly to impose strict curbs, ordering all residents to stay at home for all but essential travel last Thursday. The city’s 13 million residents were given just a few hours’ notice on Sunday afternoon that a ‘full-scale’ deep clean would start at 6pm with pictures showing trucks cannoning a fog of disinfectant as they toured the streets, while workers in full PPE sprayed chemicals on buildings and in subway stations.” [Again, article here]

No Western lockdowns, even briefly in Australia, quite compare. 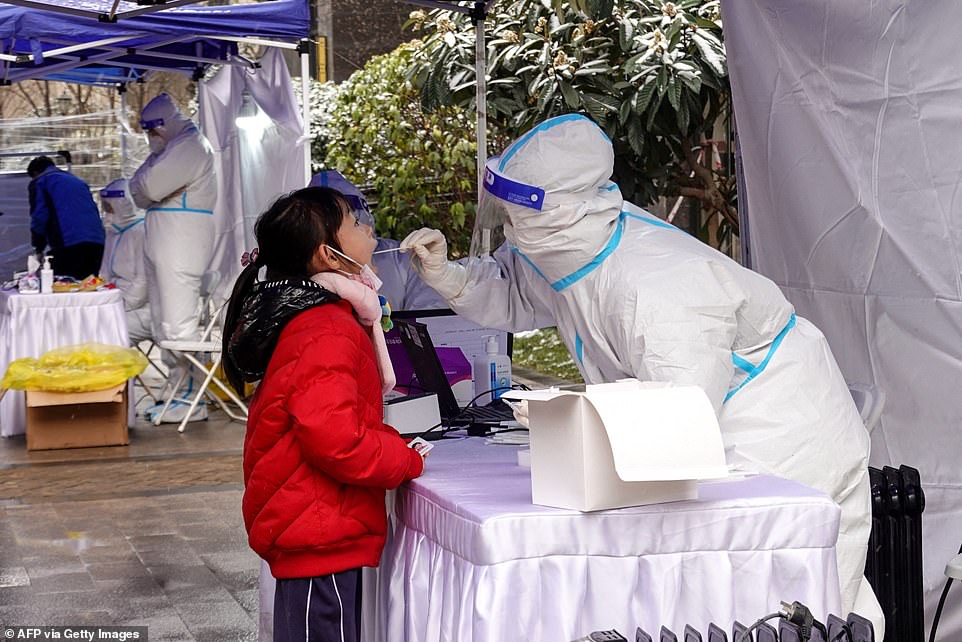 (Do any testers at CVS or Walgreens or the local urgent care look quite like the clinician above?)

It is nearly a panic in this nation that is widely considered the origin for the pandemic (although questions as to when the spread of covid actually started remain).

There are those many who believe that the virus leaked from a lab in Wuhan — and may have been genetically altered, even as a biological weapon.

(Is this why there is such a commotion over (so far) very little?) 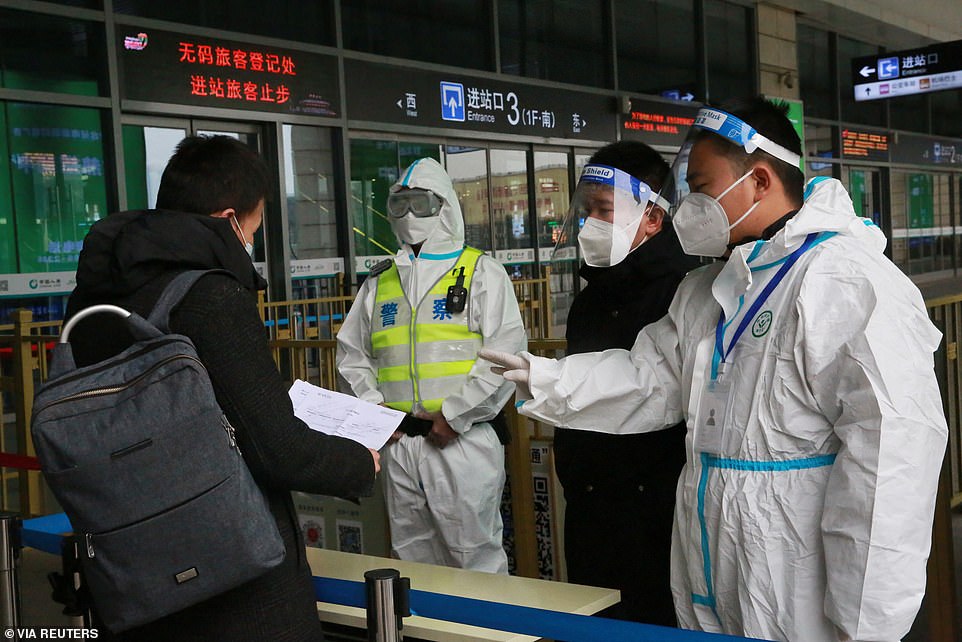 (Really, who can trust China? She bears the fruits of atheism.)

The most obvious speculation: that the incredible clampdown — closed factories, prohibited travel — is because China is ready to hold the Winter Olympics and wants nothing to get in the way. There is also the fact that China’s vaccine, unlike its Western counterparts, is all but totally ineffective against the omicron variant.

That could be. China has a policy of “zero virus” (no intentions of living with it, as we are now seeing elsewhere).

But the measures seem so radical one might also ask: does China know something about SARS-CoV-2 that even Western geneticists who have held it under microscopic scrutiny for a year and a half haven’t yet observed? Might the virus harbor capacities of which we are unaware, including the potential for wild variants that would make delta or omicron pale in comparison?

That’s nothing but speculation (perhaps wild). Covid has us all in a brain fog. No one has ultimate answers. Some experts need to stop appearing quite so much on television. And bizarre theories and cottage analyses on YouTube and social media have gotten old.

Foggy a time it is, for there is a concomitant outbreak of flu that can all but totally mimic most covid symptoms. (The best distinction remains in that strange inability to smell or taste, as well as high severe and severe headache so emblematic of covid — but not always symptoms!)

Throw into the mix the unreliability of testing, and the now-thoroughly exhausting debate over vaccines, about which we have maintained steadfast neutrality (we are not God nor even geneticists-epidemiologists-virologists), and one sees how confusion is thicker than those Xian disinfectant plumes.

Amazing it has been, the swerves. Now there is the curveball of a former president who was seen by some supporters as the bastion against a new world order that was engineering the pandemic and creating vaccines to exercise global hegemony and even population reduction (or at the very least, to make money) himself coming out strongly last week as pro-vaccine, including for the booster.

Confusion reigns. Has any bubble been punctured, as far as vehemence and anger?

Too early to tell. Much to yet play out. More to learn about the covid toll, long-term effects of even mild infection, and potential side effects of the highly-touted vaccines.

Those who present themselves as knowing the most often known the least (at least compared to bona fide experts).

While there is no doubt that omicron spreads blazing fast, and no doubt that in many cases vaccines have blunted viral effects, we are at the interesting point where so mild are most omicron effects that when a reaction occurs in a person, it is increasingly unclear whether it is from the widespread omicron or a side effect of a booster.

The media helps not.

Take CNN, which breathlessly reports on kids filling a hospital in Chicago, but way down in the article says “many of the infections the hospital is treating are mild or were incidentally caught during the hospital’s screening process in children who were getting admitted for something else.”

Reports Yahoo (honestly), about Florida: “many of those patients are being diagnosed after they’ve entered the hospital for a medical reason unrelated to the disease, such as a car accident or to deliver a baby.”

Truly, an epidemic of bias. Of exaggeration. Of conspiracies. Of emotions.

Contradiction — on all sides, at all levels.

There is even the chance that, as posited here when omicron was first reported, the variant will help end the pandemic. Today’s New York Times: “In the lab, antibodies produced during an Omicron infection protected against Delta. If Omicron dominates in the real world, that could lead to a less dire future.” It could act as sort of a new vaccine (albeit one with extensive side effects).

One thing is becoming clear:

Whether at a psychological or physiological plane, this has been a major event — one that will either end soon and be chalked up as a mild “chastisement,” or continue down an unknown path into a full-blown one.