The current pandemic, perhaps now reaching its peak in the United States — ready to “flatten” — will, however, be around for many months, the daily tally of deaths stretching toward mid-summer, with smaller hotspots and resurgences here and there for months or years as numbers add up.

The current death count is about 15,000. They expect it to end up being about 60,000, once the virus makes its sweep across the entire country. Hopefully it will be lower. So far, it has been a psychological/terror/spiritual event as much or more than a biological one. Very strange.

But every so often, after that, will be an outbreak — and possibly other major waves (once late autumn and next winter rolls around) — unless (or so they tell us) there is a medication to treat it or, as a growing chorus of federal and medical officials, along with Bill Gates, are preaching, a mandatory vaccine.

The entire vaccination matter is an issue unto itself — one we have previously addressed and will again — but the point for the sake of this discussion is that adjective “mandatory,” which was also used this week by Dr. Anthony Fauci, the now-famous expert on infectious disease.

Forcing the entire population to vaccinate brings up the term “Big Brother.”

It is a level of central control and personal intrusion that gives many pause, and it’s just one potential side effect of the virus.

The pandemic has also led to discussions on monitoring people and even tracking them via phone apps and other devices. The path to tyranny starts with the usurpation of personal rights and privacy.

Is it true or just Twitter “fake news” that there is a proposal that everyone who gets a vaccine be given a digital “tattoo” identification?

(We think at this point it is hype.)

But with all the above in mind, consider the following items in the news.

Millions of Americans, sheltering in their homes from the coronavirus, have turned to communications platforms like Zoom, Google Hangouts and Facebook Messenger in order to work or stay connected to friends and family. Free and easy to use, the services are gobbling up record numbers of new users.

But there’s a saying in Silicon Valley: If the product is free, you are the product. This is not business as usual, though. Americans aren’t willingly surrendering their online identities during this pandemic — many are being compelled to do so by their schools, family or work. Just as a swath of manufacturers are switching their production lines to ventilator and mask production for the greater good, corporations that normally view every new registered user as a data point to exploit need to take a pause on profiting from online data harvesting.

Technology companies see an opportunity in this crisis. Verily, a division of Google’s parent company, requires a Google account to find and arrange coronavirus testing and says it may share your personal health information with contractors, government agencies and other outside parties.

White House senior adviser Jared Kushner’s task force has reached out to a range of health technology companies about creating a national coronavirus surveillance system to give the government a near real-time view of where patients are seeking treatment and for what, and whether hospitals can accommodate them, according to four people with knowledge of the discussions.

The proposed national network could help determine which areas of the country can safely relax social-distancing rules and which should remain vigilant. But it would also represent a significant expansion of government use of individual patient data, forcing a new reckoning over privacy limits amid a national crisis. The notion of a national surveillance network has also faced resistance internally from some health officials, who argue that the federal government should only go as far as setting broad standards for disease and resource tracking and leave it to individual states to stand up their own surveillance networks, according to two individuals with knowledge of the discussions.

Israel’s top spy agency has been using secretly collected cellphone data to retrace the movements of those who tested positive for the coronavirus.

The Polish government launched the “Home Quarantine” app so that people in quarantine can upload geo-located photos proving they’re at home. The South Korean government is using a combination of mobile phone data, credit card information and facial recognition software to track the movements of people who test positive for COVID-19. The government posts the details publicly to alert people who might have come in contact with the infected person.

The most common form of surveillance implemented to battle the pandemic is the use of smartphone location data, which can track population-level movement down to enforcing individual quarantines. Some governments are making apps that offer coronavirus health information, while also sharing location information with authorities for a period of time. For instance, in early March, the Iranian government released an app that it pitched as a self-diagnostic tool. While the tool’s efficacy was likely low, given reports of asymptomatic carriers of the virus, the app saved location data of millions of Iranians, according to a Vice report.

One of the most alarming measures being implemented is in Argentina, where those who are caught breaking quarantine are being forced to download an app that tracks their location. In Hong Kong, those arriving in the airport are given electronic tracking bracelets that must be synced to their home location through their smartphone’s GPS signal.

So far, OneZero has found reports of potentially privacy infringing technology being deployed by 28 countries, listed below. We’ll be updating this list on a weekly basis.

In China, government-installed CCTV cameras point at the apartment door of those under a 14-day quarantine to ensure they don’t leave. Drones tell people to wear their masks. Digital barcodes on mobile apps highlight the health status of individuals.

These are just some of the ways the world’s second-largest economy has mobilized its surveillance apparatus to help contain the outbreak of the coronavirus. Private individuals who live in China have either provided photographic evidence, or told CNBC in interviews, of the CCTV equipment being installed in front of their homes to enforce quarantines. Those individuals did not wish to be identified by name for this article. While some of China’s measures appear extreme, nations around the world have taken the decision to boost their surveillance of individuals in a bid to help them fight the COVID-19 outbreak.
[For Full Story]
From Euronews: 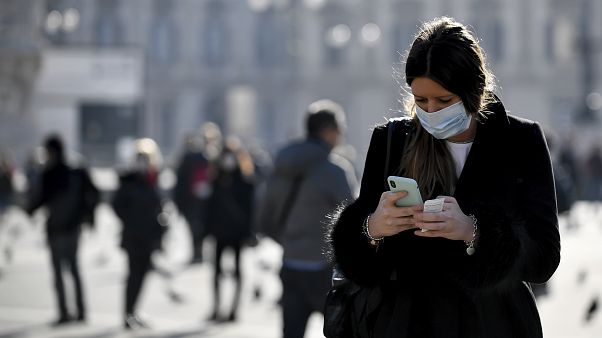 Governments and tech companies in the bloc and beyond have announced a swath of new measures amid the coronavirus pandemic.

In Thailand, people travelling from high-risk areas must download an app so that authorities can monitor their movements during their 14 days of quarantine. Meanwhile, in Hong Kong, the government are using electronic wristbands, QR codes and an app to enforce quarantine. From opt-in apps to digital tracking, countries in Europe have been leveraging technology and data in the battle to curb the spread.

As the book Fear of Fire noted about potential coming disasters: “Destruction would pave the way to authority by a small number with global authority as humans struggled to reorganize. They would seem ‘benevolent.’ Whoever or whatever group was most organized would be equipped to fill the economic and political vacuum in reestablishing order as well as an infrastructure. One can imagine the systems of communications and transportation in a state of disarray or largely non-existent after a large disaster. It took the collapse of just two towers in New York to bring transportation across the United States to a screeching halt for a week

“[One] prophecy explicitly stated that it was ‘not speaking of a barren world, or one depopulated,” but a greatly disrupted one. And so the question became: in paving the way for a nefarious personage, what would a world after chastisements, or at least initial events, look like?” (2013)