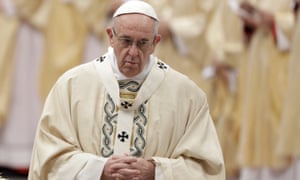 In the past four decades Ireland has become a different country, but you wouldn’t know it in Knock. In the small west of Ireland town that is home to the huge Marian shrine complex, it was hard to find a space on the tightly packed pews at 11am mass last week. The rows of the faithful – some women’s heads draped with lace – offered responses to the priest in confident voices.

Outside the chapel, built on the spot where 15 people believed they witnessed an apparition of the Virgin Mary in 1879, pilgrims filled bottles with holy water at a line of fonts or queued to complete mass cards for loved ones. Priests were available to hear confession. An office across Main Street offered a marriage introduction service – “all applications treated in strictest confidence”. The facade of the Fairfield restaurant was being repainted in Vatican yellow, and finishing touches being put to a gleaming new piazza opposite the shrine. Souvenir shops were already stocked with “Pope Francis 2018” fridge magnets, alongside rosaries and figurines. “The excitement is palpable,” said Father Richard Gibbons, Knock’s parish priest for the past six years.