A Crucifix bleeds; the bishop declares it supernatural; and the Holy Office hides it.

The intrigues that take place inside the Vatican are something that reasonably well-catechized Catholics admit peacefully, because they know that the tares will be mixed with the wheat until the end of the world.

Only the final judgment will separate the wheat from the tares and it will be burned forever.

This does not speak ill of the Vatican; on the contrary, because although the evil one is constantly creating conflicts in the holy place, that is his job, just as God continues to do His work from there [and much of it!].

It is a demonstration that the power of God can make use of an institution so strongly attacked from within, by the evil one, and sanctify its work.

Here we will talk about the case of a Crucifix that bled several times in the room of a mystic and that was approved as a supernatural manifestation by the bishop.

And yet he was later “kidnapped” by the Holy Office, the convent was forced to burn everything related to the manifestation of the Crucifix, the final position of the dicastery was never known, and although its whereabouts are still not known exactly, it has been rumored it has continued to bleed.

The poorly catechized do not take into account that the Vatican is the scene of the most violent struggles between the fallen angels and the good angels.

And that even with that internal struggle subsisting and even though most of the works continue to be excellent and holy, it clearly shows that the Hand of God sanctifies the Church.

An example of the climate, we see how, when John Paul II took office, he surrounded himself only with Poles loyal to him, to try to avoid what happened to John Paul I, his predecessor. [Views expressed here are not necessarily SD’s.]

Benedict XVI supposedly told those who went to visit him in his office that this was the only place where he had power — that outside, his power ended.

And even earlier, Padre Pio had had two periods in which he was prohibited from exercising his ministry and his reputation was defamed, due to intrigues by his enemies within his Order and at the Vatican: those who spread falsehoods in an effort to ruin his image.

Is the strong rejection of things miraculous on the part of [some] at the Vatican out of envy?

Is this why they try to hide such things, and [it seems in some cases] only accept such things publicly when there is no other choice, later erasing any trace of the internal debate that [surrounded it]?

And that happened with a Crucifix that bled in Asti, Italy, which was approved as supernatural by the Bishop, after a diocesan investigation. 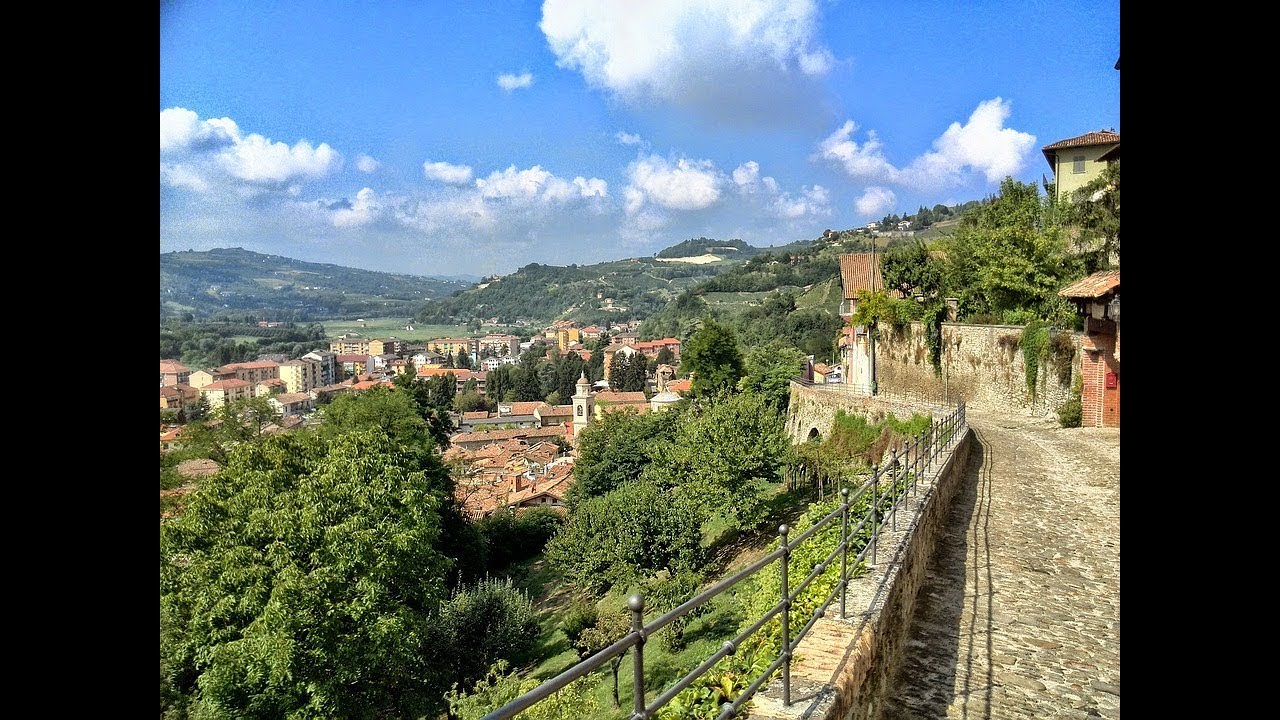 And yet, later, what was called the “Holy Office” (today the Congregation for the Doctrine of the Faith) intervened and seized the Crucifix such that to this day, nine decades later, the opinion of the Dicastery and where exactly the Crucifix is [remain a mystery]. [scroll for more]

The story happened to Maria Tartaglino, an orphan who was born in 1887 and was taken in by an institution of the Oblates of Saint Joseph in Asti.

Since she was a child, she showed great devotion.

She made the “heroic vow” in favor of the souls in purgatory, and from that moment many souls in Purgatory came to her to ask her for suffrages.

She did penance for them with prayers and voluntary sacrifices.

She received the visible stigmata of the Lord’s Passion between 1925 and 1930, “wounds” that then became invisible because she prayed insistently for the Lord to remove them, after which external evidence of the stigmata was removed, but she continued with the pain they caused her until the end of her life.

She experienced the mystical betrothal with Jesus.

Her heart was pierced like an ember by an angel.

And she experienced bilocations with Padre Pio.

Once Padre Pio said to the Piedmontese who had come to San Giovanni Rotondo: “Why do you come to me? They have María Tartaglino, go to her, I subscribe to what she tells you.”

The life of Maria Tartaglino remained hidden in the Convent until 1933, when in her room a Crucifix that she had on her prie-dieu, and in front of which she spent many hours in prayer, began to drip blood. [See website detailing her experiences.] 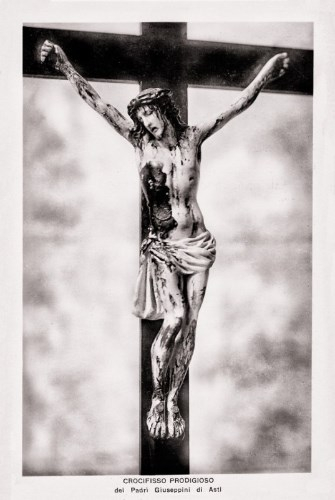 She would say about the first time, “I fixed my eyes on the side and saw the blood glistening, coming out.

“I immediately touched it with my finger and took it out stained with blood, I wiped it with a handkerchief, then I dried the Crucifix.

“There it was, blood also on the crown of thorns, on the hands and feet, and there was also a drop in the mouth.”

The bishop of Asti, Monsignor Umberto Rossi, informed of the events, had some coagulated blood scabs examined at the Institute of Legal Medicine of the University of Turin; they turned out to be human blood. 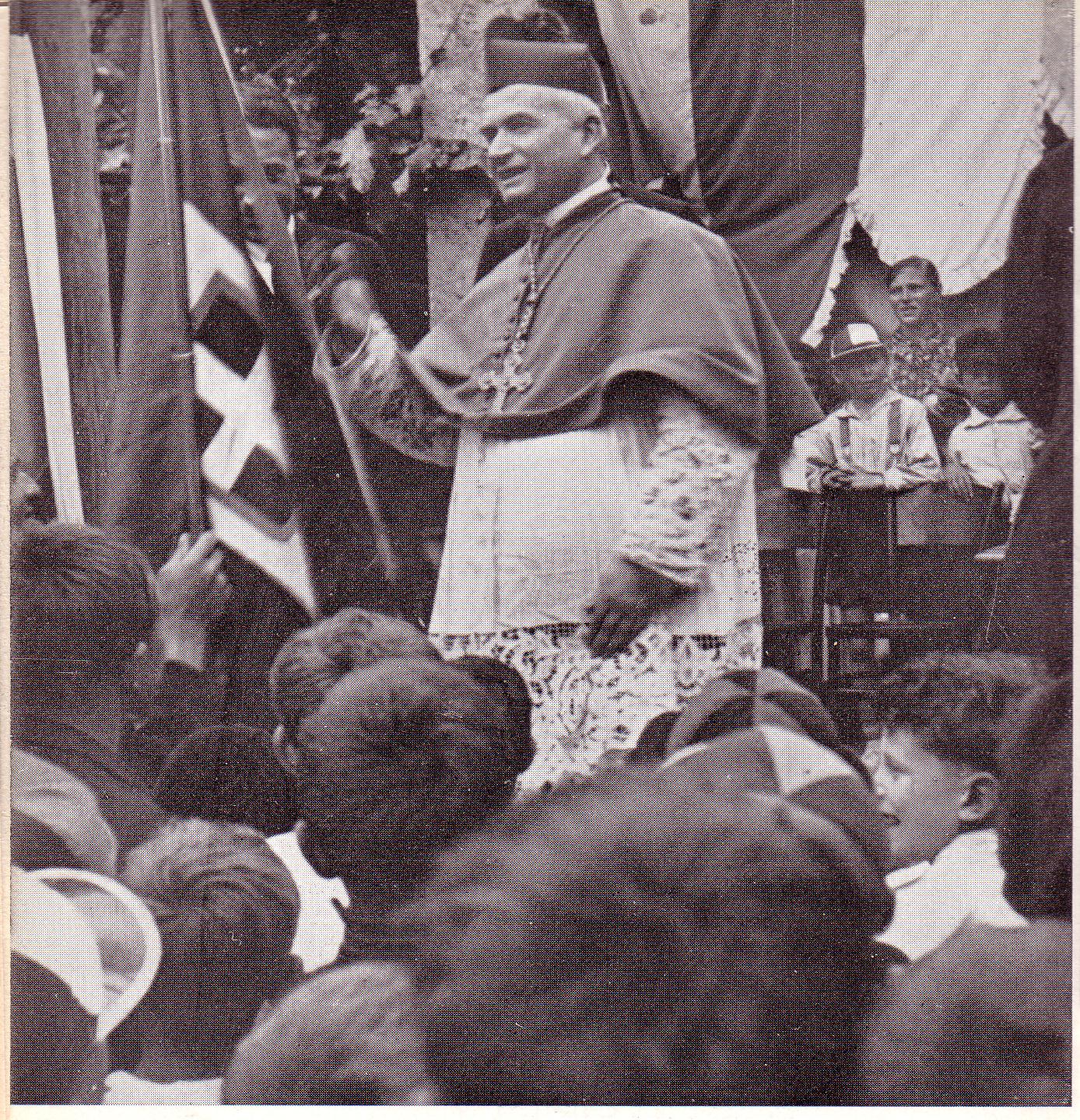 The Crucifix was X-rayed by two specialists, who found no anomalies, artifacts, or manipulations to simulate bleeding.

A diocesan court was established and 17 witnesses were questioned.

The trial ended on February 23, 1934, with a message from the bishop, who declared,

“The absolute truth of the facts is proven by the numerous and incontrovertible testimonies, collected under oath and with the most scrupulous attention, by two trials: one, carried out by the Reverend Superior of the Oblates, Father Martino, and the other, by our Archbishop’s Curia.”

On March 9, 1934, the bishop enthroned the Crucifix in the sanctuary of San José, and from then on the manifestations of faith and piety around the Crucifix multiplied.

Thousands of pilgrims flocked to the sanctuary, the confessionals were overwhelmed, and there were numerous conversions. [scroll for more]

The press, both Italian and foreign, spoke of the phenomenon and Asti seemed to be the center of the spiritual world.

María Tartaglino was frightened by the fame that the Crucifix gave her and she wanted to disappear, she even thought she would have some peace of mind by staying in another house.

But on April 24, 1934, the Carmelite Father Lorenzo de San Basilio arrived as Apostolic Visitor at the Sanctuary of San José in Asti, sent by the Holy Office.

He said that the goal was to take personal care of the Crucifix.

Father Martino, Superior of the Oblates, welcomed him with respect but discouraged him from removing the Crucifix from the Shrine, pointing out that he had not yet received a copy of the determination handed down by the Ecclesiastical Court of Asti.

But for the apostolic visitor, the Diocesan Process and the Bishop’s sentence were of no interest.

And on May 6, at night, the visitor removed the Crucifix from the sanctuary, with the entire Oblate community present, and it was taken to the Episcopal Curia.

On July 4, 1934, Bishop Monsignor Umberto Rossi informed them that the Holy Office had taken charge of the examination and final judgment on the prodigy of bleeding.

And that he had entrusted the Crucifix to the Visitor, along with some other objects and writings by Maria Tartaglino on mysticism.

In addition, the Bishop ordered, always in obedience to the indications received from the Visitor of the Holy Office, that the images and books relating to the Crucifix be destroyed, and a large bonfire was lit in the courtyard of the Institute to burn them.

Don Placido Botti, Maria Tartaglino’s confessor, and Father Martino, were forbidden to deal with Maria’s spiritual direction or carry forth any other interactions with her.

Maria Tartaglino was accused of being a psychopath in the throes of hysteria and thus inventing the episode of bleeding.

But the accusation is denied by the medical certificate issued by a Teachers Commission that visited her as early as March 19, 1934, declaring her completely healthy, normal, and well balanced. [SD note: no one can know if there were reasons for the strong Vatican rejection, reasons that have not been released publicly]

And later it was learned that an [allegedly] false medical certificate had been sent to the Holy Office.

María Tartaglino was a victim of insults and calumnies and infamies in this period.

And the same thing happens with the Josephite Fathers, who are accused of having invented the story of bleeding to help them with economic difficulties and thus save the budget of the Congregation.

Maria died on September 1, 1944, the first Friday of the month, in Asti, where she had lived. She was fifty-seven years old.

And until her death she was committed to trying to bring the Crucifix back to Asti, being comforted by her friend of faith and prayer, Padre Pio, with whom she continued to share [alleged]  bilocations.

The trial of the Holy Office and the exact location of the Crucifix were never known.

But it is known that it shed blood on several occasions in Rome, testified by some people worthy of faith like Don Luis Orione.

In March 2014, the miraculous Crucifix was seen, by some religious, on display in a cabinet located in a Room in the Vatican.

The heartbreaking words of Maria Tartaglino continue to resonate, confirmed [allegedly] by Saint Padre Pio: “the Crucifix will return and it will be a great triumph!”

Well, up to here what we wanted to tell about the manifestation of a crucifix that was approved as supernatural by the bishop of the place, but that was nonetheless made to disappear by the Holy Office without further explanation, amid slanders that later became known to be false.