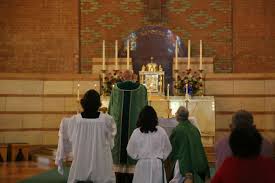 Bishop James Wall of Gallup announced Monday that each Sunday a Mass at Sacred Heart Cathedral will be said with the celebrant facing the same direction as the faithful, in order better to respect the Blessed Sacrament.

Such worship, he said in a July 22 letter to the Diocese of Gallup, is “a very powerful reminder of what we are about at Mass: meeting Christ Who comes to meet us. Practically speaking, this means that things will look a bit different, for at such Masses the Priest faces the same direction as the Assembly when he is at the altar.”  “More specifically, when addressing God, such as during the orations and Eucharistic Prayer, he faces the same direction as the people, that is, toward God (ad Deum). He does so literally, to use a phrase dear to St. Augustine, by ‘turning toward the Lord’ present in the Blessed Sacrament. In contrast, when addressing the people, he turns to face them (versus populum).”