Argentina’s Senate voted against legalizing elective abortion in the early hours of Thursday morning, dashing the hopes of pro-abortion rights advocates in the predominantly Catholic country, homeland of Pope Francis.

The Senate rejected the proposed bill 38 to 31, with two abstentions and one absentee. The bill, which fueled contentious debate, would have expanded abortion rights to allow women to end a pregnancy in the first 14 weeks. Current laws allow the procedure only in cases of rape, or when the mother’s health is at risk.
[For Full Story]
From The New York Times: 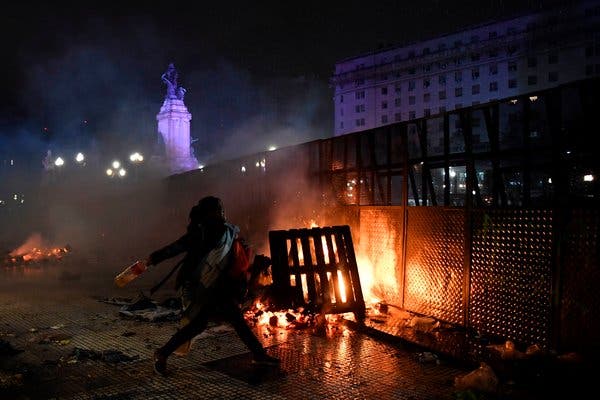 As soon as the voting result was announced, fireworks started going off on the anti-abortion side of the plaza outside the Congress building. Shortly after, a few protesters in support of abortion rights lit fires and threw rocks at the building and gathered police officers. The clashes were short-lived, but local reports mentioned an unspecified number of detentions.

Argentines from both camps had waited outside for much of the night as the senators debated and voted, wearing handkerchiefs that indicated their feelings toward the bill — green for its passage, blue against.

On Wednesday, supporters and opponents rallied outside the National Congress ahead of the vote, separated by riot fences and police. Those in favor waved green banners and formed drum circles. Those against bore the light blue of the Argentine flag, and some carried a giant cardboard fetus.

Thousands of abortion opponents, sometimes from the most distant provinces of the country, arrived in Buenos Aires over the weekend. “God gave us life,” Anto Sosa, 33, of Entre Rios, said at a rally Saturday. “And trying to eliminate a life as the first solution — it’s not right.”