Will the Holy Father’s declaration of a new memorial for the Virgin Mary serve as an enzyme for unity?

Perhaps. Perhaps not. One can acknowledge this: Pope Francis has a clear devotion to the Blessed Mother.

That came into sharp relief last weekend, when he declared the memorial for her for the Monday following Pentecost (this year May 21), placing her in our consciousness alongside descent of the Holy Spirit.

It is to be a global memorial etched into the authoritative canonical calendar, and in its universality is one of the stronger papal actions concerning the Blessed Mother in the past century.

This global recognition comes as comfort at a time (in all aspects of modern life) of: global turmoil and infighting. The new sport everywhere, in all walks: going for the juglar.

Will decree of the memorial assuage concerns about the Pope’s orthodoxy? Probably not.

Will it not show us a point of common ground at a moment in Church history when forces inside and outside the Church are in a tug of war that could cause a damaging rent — a “cold” ecclesiastic civil war, even a minor schism, as there is now a cold (but heating) societal-political one?

We’re not in a position to pass judgment on a Pope or for that matter cardinals, bishops, or priests (we’ll leave that to a Saint Catherine of Siena). But one can acknowledge that Francis joins Pius XII and John Paul II as one of the more overtly Marian recent pontiffs in a long litany of popes (Leo XIII, Benedict XV, Pius IX, Pius X, Paul XVI), adhering, despite what are seen as strong liberal tendencies, to a strikingly orthodox Mariology.

Every time he goes abroad, the Pope stops at Saint Mary Major Basilica, the central Marian church in Rome, to pray before the Madonna there, and then heads to the same sanctuary immediately upon return as an act of thanksgiving.

In South America, the Holy Father also has shown great devotion to miraculous Madonnas such as the Virgin of Luján, The Virgin of Aparaceido in Brazil, and Mary of Caacupé in Paraguay.

He also has a special and powerful devotion to Mary under the title, “Our Lady, Undoer of Knots.” We all have “knots” in our lives that could use untying (for they bind us).

While studying in Germany in the 1980s, Francis discovered this devotion at the Church of St. Peter am Perlach in Augsburg, where resides a painting from about 1700 that depicts Mary in Heaven surrounded by angels and standing on the crescent moon, crushing the head of the serpent, Satan. As archbishop of Buenos Aires, he introduced and encouraged the devotion, which became so intensely popular throughout Argentina and Brazil that the British Guardian grumbled that it was a “religious craze.”

The Pope has been to Fatima. He has visited Guadalupe. He has spoken loudly about Lourdes — not acts commonly associated with modernists. He canonized Saints Jacinta and Francisco (of Fatima), and perhaps (hopefully) will do the same for Sister Lucia dos Santos (the third visionary there).

And so, above the fray, is Mary.

Even in his first meeting with the cardinals in the Clementine Hall five years ago (this March 15), Pope Francis stressed the role of Mary as mother of Jesus. Said the new Pope at that time: “I entrust my ministry and your ministry to the powerful intercession of Mary, our Mother, Mother of the Church. Under Her maternal gaze may each one of you walk happy and docile on your path, listening to the voice of Her divine Son, strengthening your unity, persevering in your common prayer, and bearing witness to the true faith in the constant Presence of the Lord.”

Striking words, in that Mary, during dozens of apparitions (approved and alleged) purveys a very orthodox message. (At Fatima, she decried communism and the angel gave Communion as the seers knelt.)

Now, a memorial has been added to the General Roman Calendar, the Missal, and the Liturgy of the Hours — and was announced by  Cardinal Robert Sarah, head of the Congregation for Divine Worship and the Discipline of the Sacraments.

This is interesting in that Cardinal Sarah is easily one of the world’s most conservative cardinals (if we can put labels on those in the hierarchy).

It reminds us conservatives of another major Eastertime addition: the institution of Divine Mercy Sunday by John Paul II.

“As Sarah explained, Pope Francis added the memorial to the Roman Calendar after carefully considering how the promotion of devotion to the Blessed Virgin Mary under this particular title might encourage growth in ‘the maternal sense of the Church’ and in ‘genuine Marian piety.’

“This celebration will help us to remember that growth in the Christian life must be anchored to the Mystery of the Cross, to the oblation of Christ in the Eucharistic Banquet and to the Mother of the Redeemer and Mother of the Redeemed,” Sarah wrote — noteworthy because Cardinal Sarah is as “conservative” as the Pope is “liberal.”

They have found common ground in the Blessed Mother.

It is no wonder the demon attempts to halt apparitions.

The Virgin is an agent for unification while the devil is a catalyst for division.

Hail Mary, Mother of the Church: at this tumultuous time, guide it, and the Holy Father, and us all — quashing the devil’s attempts to take a jackhammer to the Rock of Peter. 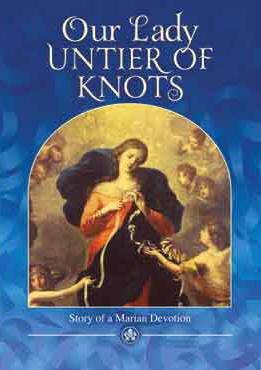