When, at the onset of the Amazon Synod, a group of indigenous Brazilian Catholics arrived with Pachamama for a tree-planting ceremony in the Vatican Gardens, Pope Francis pushed away a talk he had planned and simply prayed the Our Father without comment. Obviously, something was preoccupying — bothering — him.

The Encyclopedia Britannica explains that now-infamous pagan idol at the center of a Vatican synod brouhaha this way:

“Some characteristics of pantheistic pre-Columbian religion have survived in the Indian communities of the Altiplano, especially the worship of Pachamama, the goddess of the earth. Also worshiped is the sun god, legendary creator of the first Inca emperor Manco Capac and his sister-wife Mama Ocllo on the Island of the Sun in Lake Titicaca. Through the centuries, the Roman Catholic Church has accepted some indigenous rituals and customs by assimilation, mainly through combined Catholic and traditional celebrations that continue to be an important part of life in rural and urban settings. For example, in the mining cities of Potosí and Oruro, tens of thousands of Bolivians and foreign tourists celebrate Carnival by paying homage to the Virgin of the Mines and to Pachamama. During the festival, dancers wear elaborate masks and outfits that depict devils, their blue-eyed mistresses, Inca rulers, and African slave drivers. In the mines, llamas are sacrificed as part of the worship of Pachamama and of Tío, the protector of the mines.”

And so there is lent here a certain perspective. In fact, since its foundation the Catholic Church has been in the business of replacing chthonian idols with the presence and images of Heaven.

Christ came to disperse the spirits behind them — rampant across Israel and the Levant, as well as Greece and Rome — in those early days.

It was the fight against idols that caused many Christians to be martyred.

Yet, assimilating their symbols, and even feast days — and purifying them — has also been the Church way.

Indeed, the Christmas tree, mistletoe, the yule log, ornaments, wreaths, and other features of that time of year had pagan origins and thus a pagan spirit — until they were Christianized. Holly? Pagans love green leaves and red berries. The wood was used for wizard wands.

The same is true of Easter — particularly the representation of fertility in the form of the egg. The very name  comes from the pagan goddess “Eostre” (or Ostara), the ancient Germanic goddess of spring (represented by a rabbit —and in the Jewish holiday of Passover). Thus we see that what was once a secular-pagan-cultural fest celebrating the spring equinox was deftly replaced by the Resurrection. 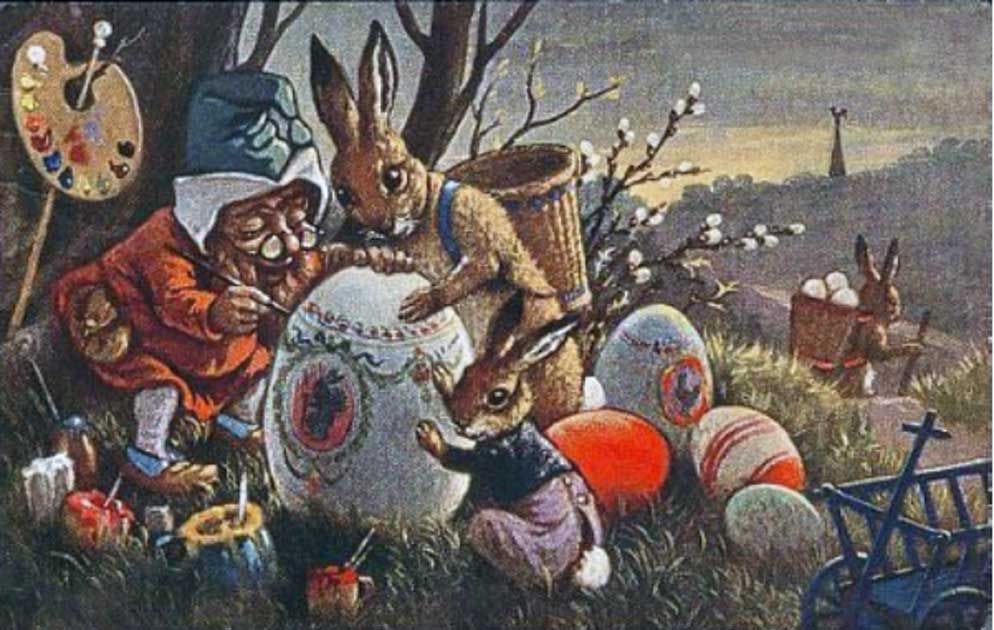 The Vatican itself took over a spot on that hill once used by the Cybele cult. (Cybele was an Anatolian goddess.)

Residual images remain, even in churches themselves.

A cathedral in Upstate New York had what resembled the ancient pagan “sun sign” (or, when reversed, swastika) in more than a hundred of its floor tiles.

In Toronto, the flagship of the archdiocese — St. Michael Cathedral — has on its ceiling a pyramid with the all-seeing eyes (argued as both a Christian symbol of God and a pagan-Masonic representation; look no further than your wallet and a U.S. dollar bill).

On many old Gothic churches in Europe — including Notre Dame in Paris — are gargoyles: representation of creatures from the netherworld. They guard against storms and things like the “god” Seth. 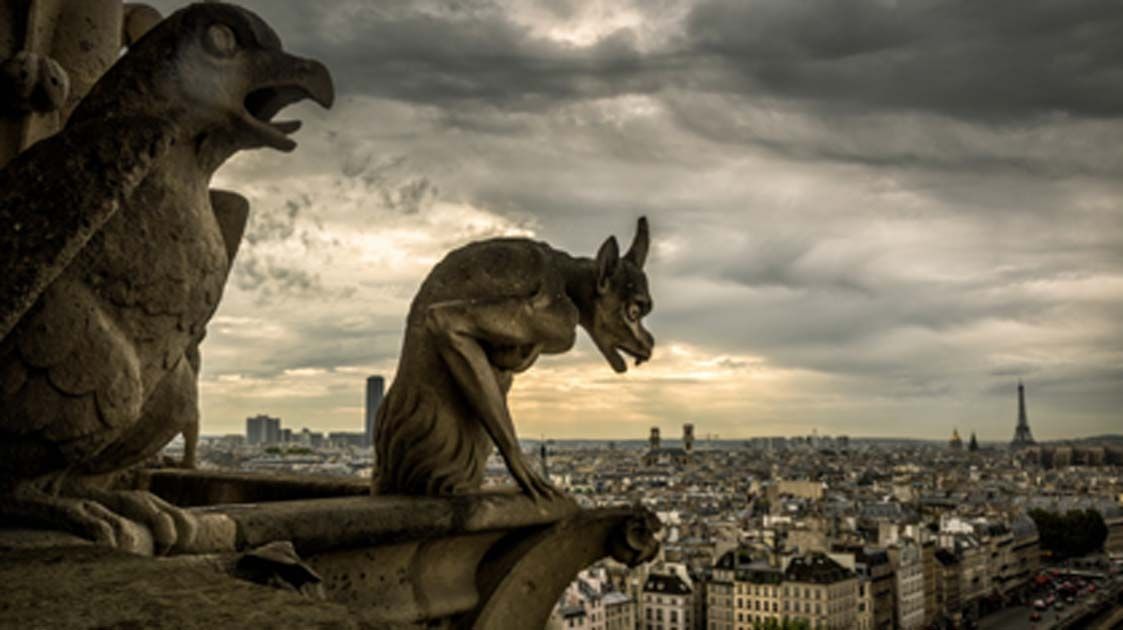 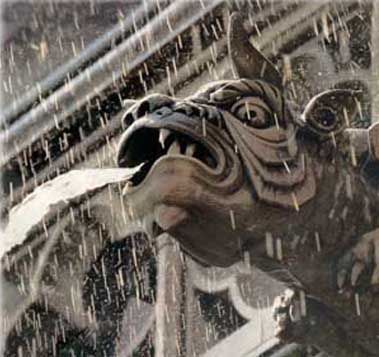 A bit fierce, no? 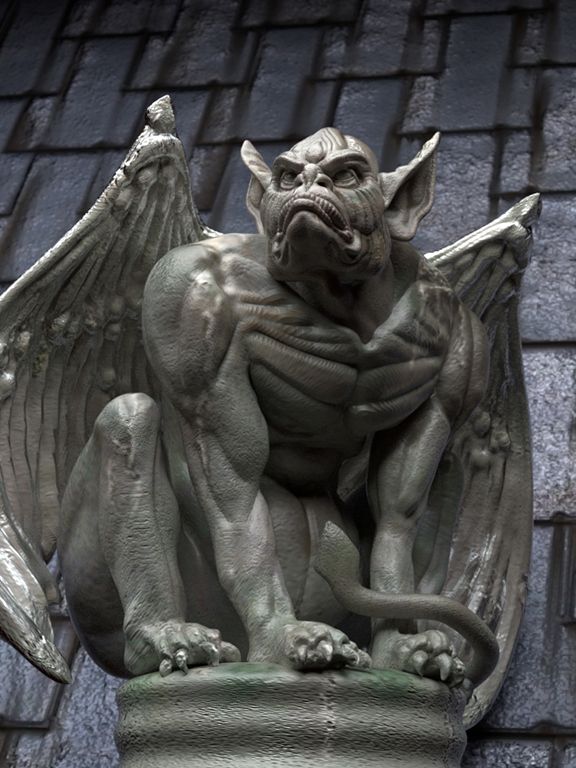 Here’s yet one more: 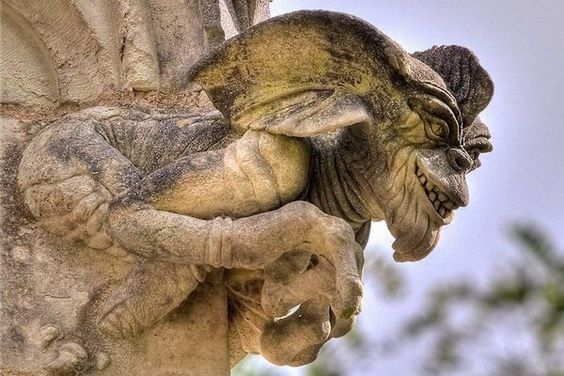 The list continues. Lions, dragons, snakes and other creatures hang from the friezes of tens of churches, cathedrals, and other buildings.

In Washington, one in the image of Darth Vader was planted on the National Cathedral (which is Episcopalian) in 1980. The fierce head was sculpted by Jay Hall Carpenter, carved by Patrick J. Plunkett, and placed high upon the northwest tower of the Cathedral.

The point is made.

It is a difficult struggle.

The safest solution would seem to be dispensing with anything that in any way might represent what is remotely demonic, while appreciating the Church’s approach to paganism — Christianizing what and who it can — which has been tried and tested and has succeeded for now twenty centuries.