When we’re close to Jesus and work at this daily, we feel His Presence in ways large and small.

Wise it is to invoke Him first thing each morning, asking Him to appear in one’s midst, right in front, closer than your shadow. And the Lord is near when, in our free will, we diligently, respectfully, and prayerfully ask specifically for that closeness.

For example, we have a butterfly garden in our yard — milkweed, lantana, cosmos, dianthus, and penta. Late in the fall, we watched with no little wonder as a slew of caterpillars materialized on the plants, voraciously munching on leaves and soon all but stripping the stalks.

Soon, hanging on the plants by mere threads, cocoons or “chrysalises” materialized. 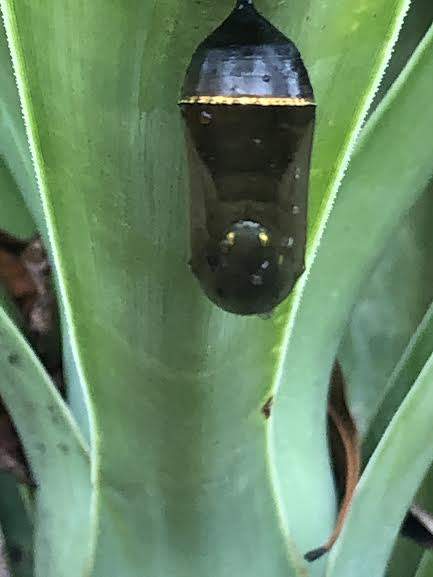 Glasslike and virtually transparent, one could look closely and see the caterpillar inside.

In a bit more than a week, one chrysalis hatched, then another, first darkening and a day or two later, allowing one to actually glimpse the orange and black patterns of a monarch butterfly.

Does anyone seriously think all, or any of this, “evolved” by mere chance? 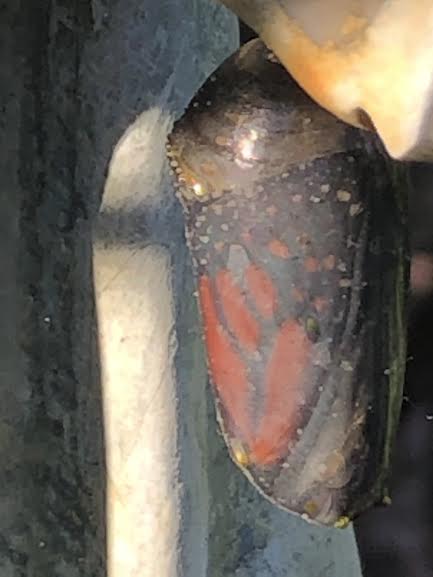 The next day or soon after, a gorgeous, sharply colored butterfly, nearly full-sized, would appear next to its spent chrysalis, which now looked hollowed out with an “exit” hole at the bottom.

Only God could design something so incredible: a caterpillar metamorphosing into a beautiful flying creature, unfolding from what seemed like impossibly small cocoons. 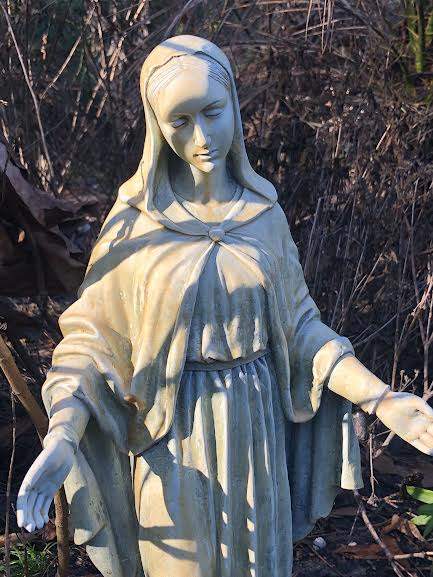 While all the rest were hanging from plants, one caterpillar chose the left arm of a Miraculous Medal statue. This was particularly wondrous to us, and my wife, Lisa, who’s the one who has a special “thing” for butterflies, and thought of the garden to begin with, found no little bliss each time one hatched, urging each one on.

Finally, on January 12, the butterfly hanging from the statue, one of the last, hatched and Lisa named “her” Mary. As usual it perched next to the chrysalis.

Excited, she ran to the house for her cell phone but when she returned the butterfly was nowhere to be seen.

Instead — and ominously — a large crow squawked by from a nearby fountain.

Devastated, Lisa decided the crow had eaten it (as crows and other birds are wont to do). Nature is nature. But Lisa was devastated. There was something special about “Mary.”

A day later, I was wrapping some plants in the garden, preparing for a cold snap (twenty-eight predicted for the night), and when I brushed up against one near the statue, suddenly there was the butterfly, apparently jolted from a leaf and walking on the ground. It hadn’t been eaten. It had survived after all. Lisa was ecstatic.

But what to do about the plummeting temperatures — and the fact that the butterfly still had not taken wing?

We had a few potted plants to feed them (the other garden was decimated by the cold), and when I offered a dianthus to the crawling insect, “Mary” promptly climbed aboard and began feeding on a flower.

We decided against putting it under a barrel for protection, instead bringing it into the garage, where there is a bird cage we don’t use. Although concerned it could crawl out, it seemed glued to the plant and still showed no signs (unlike others) of flying. Lisa “visited” the butterfly throughout the day, delighting in and chatting to it. 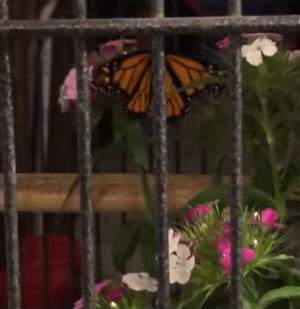 With so much stored there, it was a needle in a haystack.

We put out sugar water to attract it. We used banana peels. We placed the plant on the floor. Lisa prayed especially to Saint Joseph and Saint Anthony. Day after day, for the next week, we said prayers and glanced around hoping to see “Mary.”

Last Friday (1/21/23), a special prayer was said (to Jesus) to find the butterfly before it starved or was dehyrdated. It had been a week. It was suddenly starting to seem bleak. As per routine, we went to seven a.m. Mass, prayed a Scriptural Rosary, and when we got home, something made me stand where the cage had been and take one last look around, muttering another prayer.

Immediately after the short prayer, I turned to head from the garage and there it was, crawling on the floor: “Mary,” looking beautiful — no worse for the wear — and suddenly taking flight in the garage, landing on the slats of a window blind.

I rushed outside to grab the plant so we could entice her, trying to think of the best way of capturing the insect without damaging its wings. Didn’t want it to disappear again!

No need for a net.

When I opened the door to re-enter the garage, Lisa was walking slowing toward the door, motioning for quiet. The butterfly was on her face — perched on her upper right cheek near her nose. It had flown from the blinds and circled Lisa’s head three times before landing on her. I was stunned. So was Lisa, who was able to walk out the door without scaring it off. Once outside, “Mary,” freed and safe at last, flew over the garage and away.