“Please find attached photo taken in the church at the Franciscan Friary in Rossnowlaugh, Donegal, Ireland,” writes Sheelagh Melville. “I wanted to share this with you on the Feast of Corpus Christi. The light is seen directly in front of the tabernacle.”

Another note: “My brother was diagnosed with lung cancer in April of 2016 and shortly after that we were told that Saint Charbel relics were visiting the United States,” writes viewer Mary Ingraham. “We went to touch them and continue to pray for his intercession.

“I wrote to the Lebanon Monastery [home base of Saint Charbel] for oil and they sent it to me and right after that I noticed this image  [left] had appeared on the back cover of a book at my parents’ home. It was in the bookcase flipped around for some reason and that image was on the outside of the book! It is still there to this day.”

Notes a correspondent in Chicago with what seems to be a charism with the camera: “I prayed and asked Lord Jesus what he would want to show me today. I was quite taken aback after the picture I took from the sky. I

took the photo at 9:15 a.m. [Sunday] when the sky was quite cloudy. The picture depicts the feast day of the Holy Eucharist today—the body and blood of Lord Jesus. The color is almost similar to the banner from church today. Additionally, the Sacred Heart of Jesus appears as a fish.”

Also in the “postal box,” Dr. Diosdado Lim in the Chicago area has educated us about what is called the Shrine of the Mother of the Eucharist and Grace in the Philippines, which many believe has miraculous characteristics. As always we place it in your “prayer account” for prudent contemplation and evaluation. 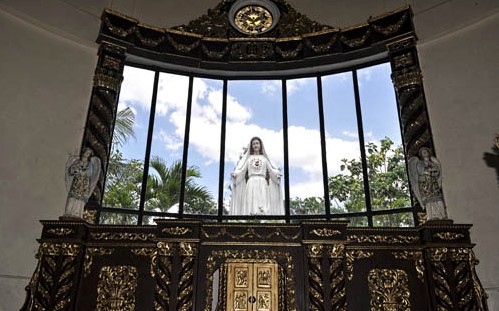 Says the good doctor in Illinois (in whose home is an allegedly miraculously exuding Crucifix):

“Just in case you are not familiar with the story of the oil from the shrine, I’m reiterating it as follows: 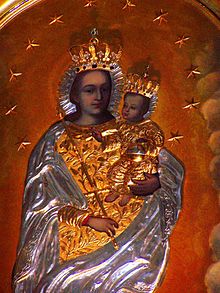 On August 15, 1991, at 3:00 a.m., our Blessed Mother appeared to [mystic] Carmelo Cortez at the Daughters of Mary Consolatrix  Monastery in the city of Naguilian in La Union province. Carmelo went there to attend a religious retreat. During that apparition, the Blessed Mother asked Carmelo to build a House of Prayer. With help from family and friends, Carmelo raised enough money to put a down payment on a lot in Novaliches, Quezon City, Philippines. One day, the Blessed Mother told Carmelo to go to the lot and to stand facing the morning sun. He was then told to turn to his right and to take thirteen steps. On that spot, the Blessed Mother told him to dig a hole. When Carmelo had dug about six inches deep, rose-scented oil sprung up. Application of that oil to the sick has been reported to have led to some healings.”

Hmmm. Three a.m. So many claim various events (good and bad) as the clock strikes that hour. A mystical time, it seems. A parting of the veil. (Let us know your accounts!)

[Footnote about the shrine from Visions of Jesus: “The Mother of the Eucharist and Grace had three wishes, that through Brother Carmelo, the people would go back to the Roman Catholic Church; that the people should receive the body and blood of Christ; and the need for prayer for the priests.

“The church received these manifestations negatively. They questioned the need to pray for the priests,” Brother Carmelo said. Moreover, he said that when he had the privilege to speak to the late Pope John Paul II and Pope Benedict XVI, even they believed that the priests need prayer. 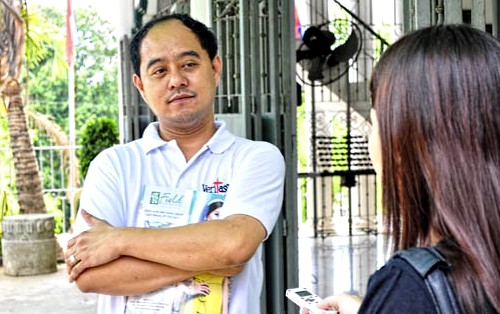 other of the Eucharist and Grace was permitted. Bishop Cirilo Almario was the head of the Diocese of Malolos back then, and he himself witnessed the miracle of healing through Bro. Carmelo. He was supposed to undergo a bypass operation in 1991 but through the grace of the Mother of Eucharist and Grace, he was healed.

“Brother Carmelo was able to build the Shrine in honor of the Mother of Eucharist and Grace, which is also the first replica of the Holy Land Nativity here in the Philippines and the whole of Asia. Through the collective efforts of different individuals from all over the Philippines, they were able to build the House of Prayer, which is the aim of Bro. Carmelo. The shrine together with the chapel forms an L-shape, which for him means love.”]

So much occurs in that devout archipelago in Asia!

[resources: Love Is A Radiant Light, the Life and Words of St. Charbel]