We enjoy our mail, however voluminous, and however long, on occasion, it takes us to go through it.

We appreciate your patience!

So many notes of inspiration…

From Beth Britz Monday, day after Pentecost: “I witnessed and photographed a Eucharistic miracle last night in Johnstown, Pennsylvania, at St. Patrick’s Church. I have not been member of that church since my childhood, but decided to make a visit with friends to its chapel of perpetual Adoration in the church convent after attending a rosary that same evening at Visitation Church in Johnstown for a healing service for one of their parishioners.

“My friend, her daughter, and I were transporting the pilgrimage image of Our Lady of Guadalupe for veneration at the rosary healing service and stopped at the Adoration chapel afterwards before heading home to Hollidaysburg. While there, we lit candles and prayed. Minutes before we were leaving, I looked directly at the monstrance while making my petitions to our Lord when I noticed a image at the bottom of the host. I got up from my seat, looked closer and I knew it was what I believe it was….a image of a dove, symbol of the HolySpirit!….on the feast of the Holy Spirit!! To assure myself that I wasn’t imagining anything, I asked the others with me to look at it closer too. They both did and agreed that it was indeed a dove….the Holy Spirit!

“I asked my goddaughter to take a photograph with my phone of the monstrance and it’s image of the dove. She did and this is the result! I don’t think that there is any question about what image is on the sacred host…it is a dove…the Holy Spirit….on the feast of the Holy Spirit! There are no words to describe how blessed we all feel to have witnessed a Eucharistic Miracle! Thank you Holy Spirit!” 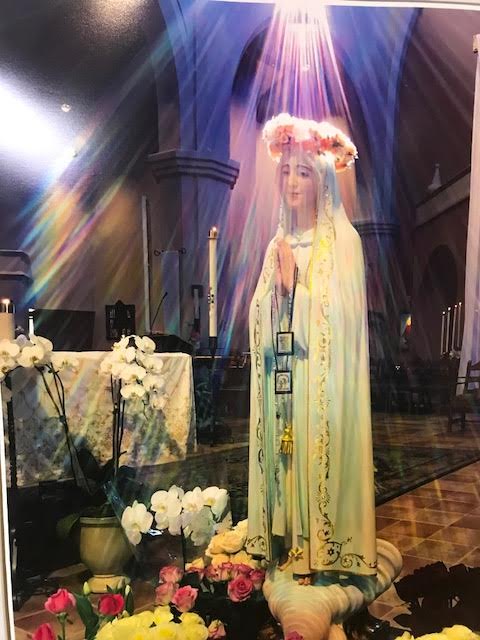 “This picture was taken at St. Clare’s church in Roseville California after 8 a.m. Mass two weeks ago,” writes Alex Ireton. “It was the day we crowned Mary for the month of May.
[The pastor] Father George told the parish last Sunday that a remarkable event happened on the altar that day. After the little girl who crowned Mary told father as she was placing the crown on Mary she moved and smiled. Father thought it was the child’s imagination and told her she probably needed to eat some breakfast. As he went to change out of his vestments people came running to tell him something was happening at the altar and to come quickly. When he returned this is what he saw and of course all the people that were present there. It lasted long enough for pictures to be taken.”
From Mansfield, Connecticut, Paula Newman described the experiences as her mother and father approached death.

“I believe with complete certainty that both of my parents were blessed to experience visions of Jesus while confined to their deathbeds,” she writes. “Although at the time of their individual last agonies (about a decade apart) neither of my parents were able to speak, I just knew at a particular time for each of them that they were looking at Jesus as I sat in their rooms.

“My father, dying from stomach cancer and barely able to move at all towards the end of his life, on three separate occasions suddenly sat up in bed, looked up at the ceiling in front of him, and reached out with his right arm, while having an expression on his alert face of awe and expectation and longing. After a moment, it seemed he must have been told ‘not yet,’ because he would then frown and slump back upon the pillow each of the three different times.

“My mother, dying from congestive heart failure, had a similar experience. I had posted an 8″ by 10” color portrait of Jesus and His Sacred Heart onto a message board opposite the foot of her bed and she, too, would suddenly sit up and reach out to the picture, with that same awed expression of longing and expectation. Also, even though her nose was covered by an oxygen mask, my mother had the double grace of being able to detect the smell of roses associated with the presence of Blessed Mother Mary, even though we did not.

“The fact that I was able to witness my parents experiencing the heavenly realm gave me much consolation when they eventually passed away. I often implore their intercession in difficult moments, so that I may one day be worthy to join them in God’s glorious kingdom…”

No doubt, you will see them again!

We all can know this with joy — if we are “all in” with Jesus.

“In 1977 [a priest we knew named] Father Mike was preparing for his vocation, living and studying at the old St. Mary’s seminary located in Cincinnati, Ohio. He enjoyed his four years there and after becoming a chaplain for three local hospitals he would often return to St. Mary’s to visit. Ministering to people who are suffering devastating illness and people who have lost loved ones is a demanding, stressful job so Father Mike relished an occasional ‘escape’ back to the seminary. He’d go up to his old room, number 148 on the second floor, to just sit, focus his thoughts and re-energize his soul…

“In the summer of 1995, he was making one such visit. By this time the seminary was not in use anymore. Father Mike entered the deserted building, climbed the stairs, and started down the hall to his room when his beeper went off. He carried a voice pager but the message being broadcast was so garbled he couldn’t understand what was being said. Knowing full well it might be an emergency, he immediately turned around, went back down the stairs, out to his car, and drove to a nearby gas station to use the pay phone.

“After calling his staff at Providence Hospital he was told no, they hadn’t paged him. The woman answering his next call to Children’s Hospital also replied in the negative. Figuring it must have been St. Francis/St. George, Father Mike called his office there, only to hear his secretary say no, she hadn’t beeped him either.

“Concluding it must have been a wrong number, Father Mike headed back to the seminary. As he pulled into the parking lot he couldn’t believe his eyes. In the eight minutes he was gone, the entire north wing, including room 148, had completely collapsed in on itself. If you ask Father Mike who he thinks beeped him he’ll reply, ‘I believe it was through the grace of the Blessed Virgin.’ St. Mary’s was originally dedicated to her. Her promise to protect us from harm proved true.”

True indeed. And this we must remember, as her month ends. So many do not avail themselves of her.

[We appreciate your donations!]