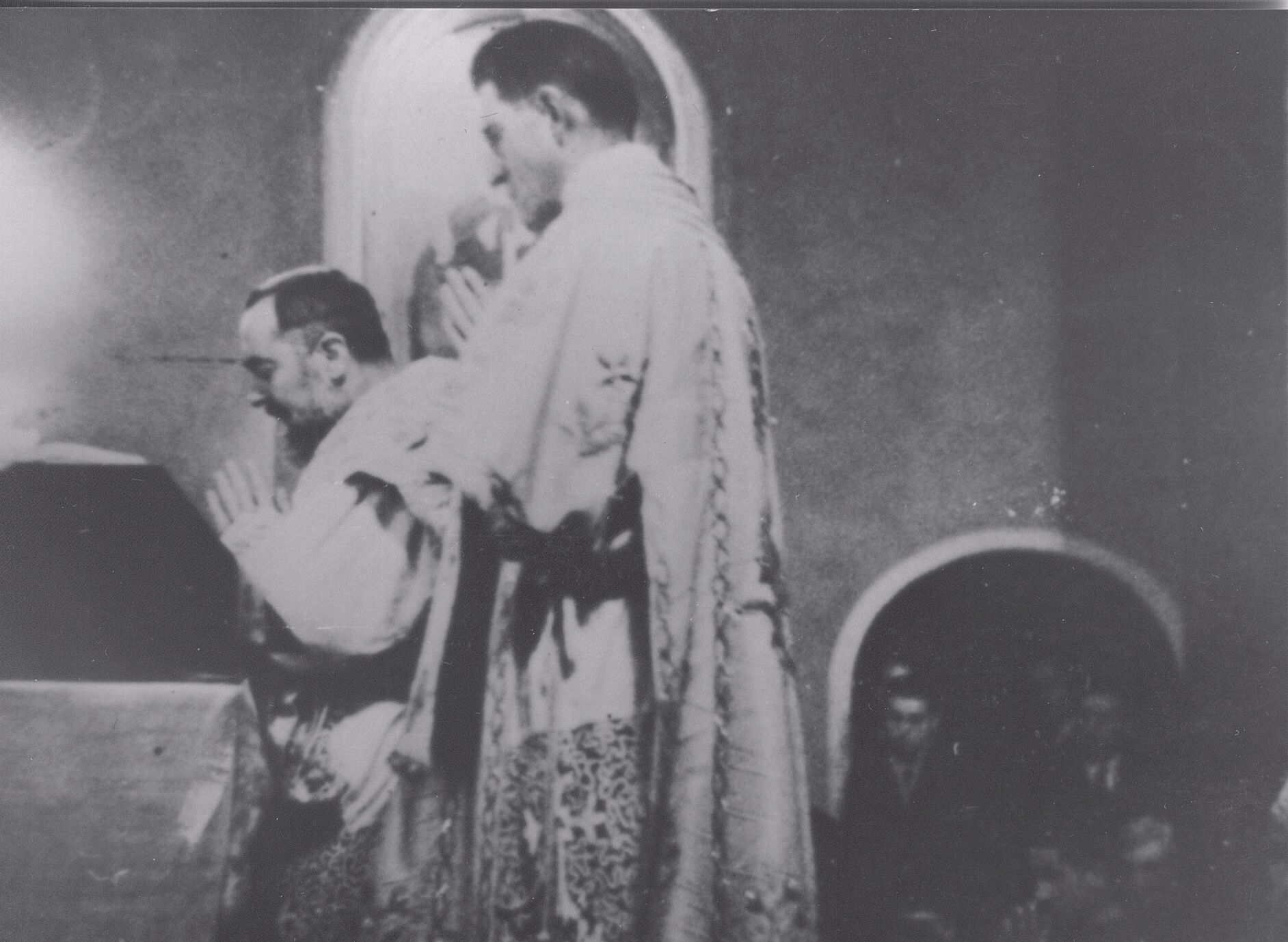 Padre Pio’s Masses have become legendary. They would last for hours, and would overwhelm the congregation.

When Padre Pio celebrated Mass, were his thoughts with the Sacrifice or were they with the Feast? He never spoke much about his experiences on the Altar, yet some very persistent people succeeded in dragging some words out of his mouth, which I will now report. On the whole they form a theology of the Mass worth learning.

“Father, what is your Mass?”

“A sacred mixture with Jesus’ Passion. My responsibility is unique in the world.”

“What lesson must I learn and understand from your Holy Mass?”

“That I suffer all the sufferings endured by Jesus during His own Passion; that is for as much as it is possible for a human being to suffer.”

“Father, do you agonize as did Jesus in the garden of olives?”

“Does the angel come to you as well, to comfort you?”

“Which FIAT do you pronounce?”

“To suffer for my co-exiled brothers and for the advent of His kingdom.”

and who will be doing the shouting?”

“The children of mankind, especially those who have been benefited.”

“Father, how was Jesus’ body left after the flogging?” “As the prophet says, ‘He became one complete wound, He became a leper’.”

“And so, are you also a complete sore, from your head to your toes?”

“And is not this our glory? Should there be no more space to include new wounds on my body, I will put new sores on top of the old ones.”

“Father, when you are being flogged, are you alone or is there someone to assist you?”

“The Blessed Virgin assists me, in the presence of the entire Paradise.”

“Father, Jesus gave me to understand that you suffer even the crowning of thorns, otherwise the immolation would not be complete. Are the thorns placed just on your forehead or are they place around your whole head?”

“Around my entire body.”

“Father, do sinners pull your hair as they did Jesus’?”

“Father, how much do you suffer during the celebration of the Holy

“Do not be concerned about this since, during my Masses, my sufferings undergo a crescendo, until the end of the Mass.”

“Father, within the celebration of the Divine Sacrifice, do you take

upon yourself our iniquities?”

“It cannot be done in any other way, since it is part of the Divine Sacrifice, hence the sentence of the sinner falls upon me.”

“Father, I saw you trembling as you were ascending the steps to the Altar. Why? Was it for what you were about to suffer?”

“Father, why do you cry when you read the Gospel at the Mass?”

“And you think it a small thing that a God, conversing with His creatures is contradicted by them and, worse, He is continuously wounded by their ingratitude and cruelty?’

“Father, why do you cry at the Offertory?”

“Father, would you please tell me, why do you suffer so much at the Consecration?”

“Because it is at this very moment that a new marvelous destruction and reconstruction occurs. The world and the whole of humanity are destroyed and reconstructed at Mass. At every Mass.”

“Father, how do you support yourself on the Altar?”

“The same way Jesus did on the Cross.”

“Father, did the slaughterers turn Jesus’ cross upside down in order to rivet the nails?”

“Did they turn yours as well?”

“Father, Does the Blessed Virgin assist your Mass?”

“And you think that the Virgin would not interested in Her Son?”

“And do the angels also assist?”

“Father, do you too repeat the last seven words recited by Jesus on the Cross?”

“Yes, I too re-count them, even though I am most unworthy.”

“And to whom do you say ‘Woman, behold your son’?”

“To Mary I say, ‘behold the children of your Son’.”

“Do you experience Jesus’ thirst and abandonment?”

“Did the crucified Jesus have His viscera worn-out?”

“What did the Virgin do at the foot of the Cross?”

“She suffered in Her Son’s sufferings. She offered all Her pains and those of Her Son to the celestial Father for the salvation of humanity.”

“Father, how must we attend the Holy Mass?”

“The same way the Virgin and the pious women did. The way St. John assisted at the Eucharist and at the Sacrifice of the Cross.”

“Father, what benefits do we gain by attending the Holy Mass?”

“They cannot be counted. You shall see them in Heaven.”

“Father, what is the Holy Communion?”

“It is complete Mercy, both internal and external;it is total encirclement. Pray that Jesus will allow you to physically, as well as spiritually, experience His presence.”

“After the Communion do sufferings continue?”

“Father, at the Holy Mass do you too die?”

“I die mystically, In the Holy Communion.”

“Is it for vehemence of love or sorrow that you suffer death?”

“For both, but mostly for love.”

“On whom did the dying Jesus place His last look?’

“Father, you said that at Communion the victim dies. Do they place you in the arms of Our Lady?”

“No, they place me in the arms of St. Francis.”

Well, since I read these confession, snatched from the Father of the Gargano (San Giovanni Rotondo), I have tried to participate at Mass in this light.

Even at the new Mass, at the prosaic Mass and even amongst guitars etc…  I am sure that this takes place.

In a certain way I feel closer to the hidden Jesus who, in His lateral Tabernacle, is humiliated and put aside by so called well-intentioned people.

But in spite of it all, He continues to descent from Heaven and come to us.