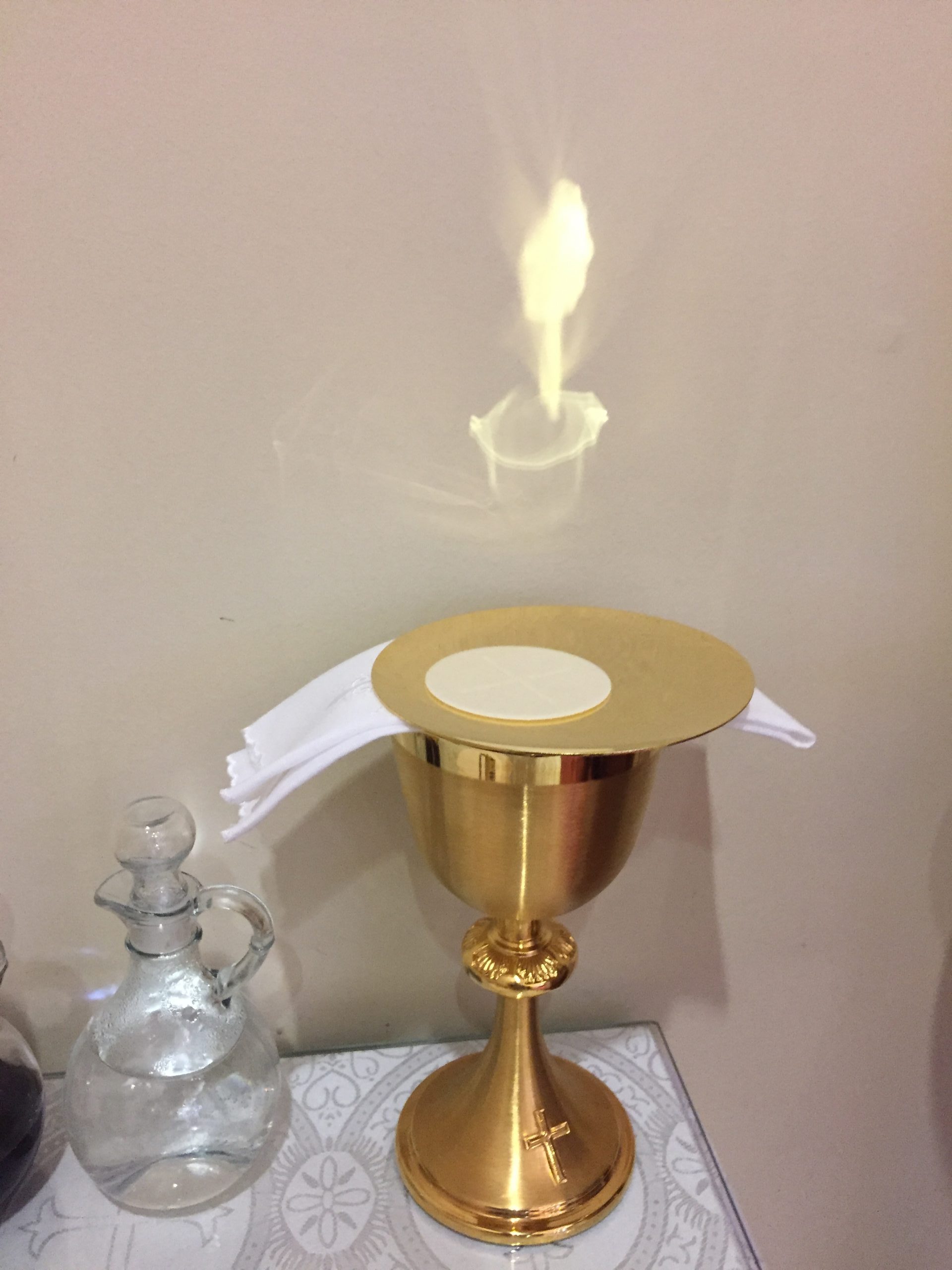 +
“Happy Pentecost Sunday,” wrote Frank Donato yesterday. “I took these pictures before and after Mass today. Yes, it’s a reflection of light on the wall. I check to make sure the large Host is on the plate before Mass, but it never made that reflection before. So with my surplus and cassock on just before Mass I went back into the sacristy, got my phone, and took the picture. It occurred in Sacred Heart Church Sunday May 31,10:00 a.m. mass in King City, Ontario. Sit Nomen Domini Benedictum.”
————–
“Look at the ‘face’ in the third picture… from an Allnewspipeline article: ‘As America Burns’…..” is another e-mail we received over the weekend (as America incurs a disruption within a disruption, as foreseen on these pages just weeks ago).
+ 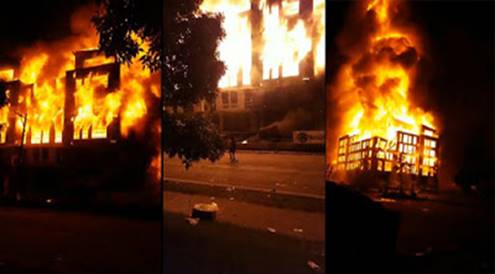 ————–
“You need to write about the power of sacramentals like Blessed Salt and Holy Water,” wrote Cecilia Polasek from El Campo, Texas. “We need this now! I am asking the Holy Spirit to guide you! I have blessed my community, highways, and neighborhoods. I have blessed my school!  We need to use Blessed Salt in all of our cities and communities now! I bless places all the time because of your articles! Thank you! God bless America!”
+
(The one thing they should not have done in church restrictions is take away Holy Water. Do we not believe in its power to dispel evil?)
———–

Sacramentals — and statues — carry the power of protection.

One viewer from abroad asked us to reflect back on a huge earthquake that struck off the coast of Peru on May 31, 1970 — fifty years ago Sunday.

“The quake and the massive landslides it triggered killed approximately 70,000 people,” noted an article he sent. “A wall of ice came loose from Peru’s highest mountain, Mount Huascarán, careered down the mountain at incredible speed and buried the town of Yungay. A statue of Christ in the town’s cemetery and four palm trees were all that remained of Yungay.”

In nearby Ranrahirca, 20,000 people were killed, leaving only 400 survivors.

———-
Noted Kathleen Saunders from St. Louis, Missouri, “I read the Catholic Exchange article about Mother Cabrini’s spring, and I wanted to share a small miracle with you that happened there. When Pope (now Saint) John Paul II was in Denver in 1993 for World Youth Day, I led a group of four young teenagers to participate and hear our Holy Father speak. In between events at Mile High Stadium, my husband decided to visit a relative while I led the children to Mother Cabrini’s spring. The kids and I were exhausted from the long hike to the area where the Pope addressed over  90,000 youth, as well as our journey to the spring, when the oldest of our teens twisted her ankle.
+
“It had swollen to about twice the normal size and she was in terrible pain. She was a big girl — the largest in our group — and she was unable to put any weight on it. To make matters worse, the other three kids were in their early teens and had very slight builds. We knew we couldn’t carry her back from the spring and were at a loss as to what to do.
+
“We decided to support her to the water’s edge and pray for a miracle because we had no way to get her back. This was before cell phones, and we found ourselves quite alone with night falling fast.
+
“I instructed the teens to kneel and pray for Mother Cabrini’s intercession. We all struggled to get the poor girl to the spring where she immersed her foot and ankle while we continued to pray.
+
“When she withdrew from the water, incredibly, her ankle had resumed it’s normal size. She had no pain whatsoever, and she was able to make the long hike back to the car!
+
“We claimed the little miracle,” says Kathleen, “which was something none of us will ever forget. Nor will we forget the double rainbow that arched over Highway 70 as our car, and thousands of others, journeyed home from the event. Candy kisses from Heaven? We thought so. Thank you for allowing me to share this with you.”

And wrote Bill Freeman from San Clemente, California: “I remember that in this prophecy, it was mentioned we would be returned to a more simple time or peasant time. It occurred to me at least one very positive aspect of this virus is how millions of companies have seen that a great number of their employees can work from home. I believe for monetary reasons beneficial to those companies, many of those employees will be given the option of leaving it that way. This will result in I dare say tens of millions of mothers and fathers who will be able to stay in the home with their children. Make them breakfast leisurely…lunches at home…mom or dad or both will be home when the older kids get home from school meaning they won’t be unsupervised from 3:00 to 6:00 as it is now. Homemade dinners now eaten together would become much more commonplace as we are all learning now to cook at home. Anyway, just a thought.”