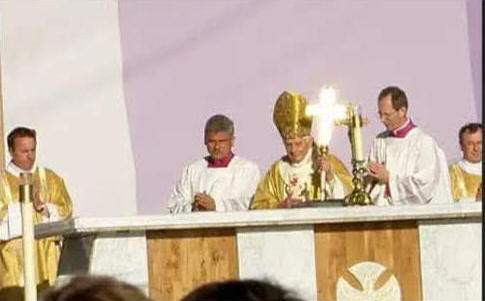 The picture above of dearly beloved Pope Benedict XVI was apparently taken at Bellahouston Park in Glasgow, Scotland, on September 16, 2010, during a visit to the U.K. — the sun striking the top of the papal staff, illuminating the entire Cross. Some “coincidence”!
+
God, of course, can send signals any way He wants and often chooses nature to do so, balancing on that fine line of natural/supernatural so there’s room for: faith.
+
A man who attended many of our retreats showed us a photo of himself, his girlfriend, and the future Benedict (at the time, Cardinal Ratzinger) in St. Peter’s Square. The couple explained that they’d spotted Cardinal Ratzinger and said, “Do you mind if we get a photo?”
+
Cardinal Ratzinger said something to the effect of, “Sure,” and reached for the camera — thinking they wanted him to take a photo of them! Humility.
+
From another viewer, Tammy Palubicki of Winona, sending the picture below:
+
“Attached is a photo taken on Christmas morning at a hermitage in southern Minnesota. I personally know the hermits and their priest just passed away a couple of weeks ago, but I think he was with them.”
+
Yes, and also Jesus was there: He comes so very close when we take the time to invite Him, to speak directly to Him, when we ask for His close and direct Presence.
+ 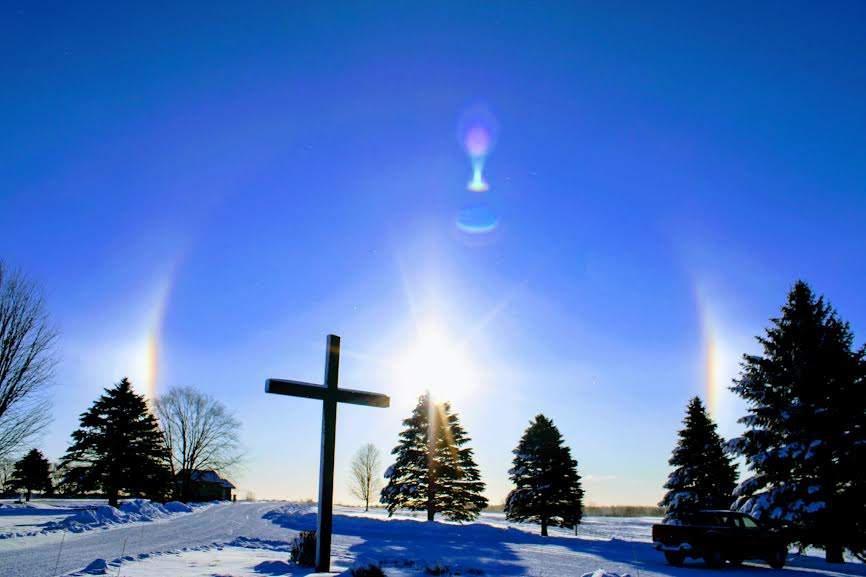 +
Wrote long-time viewer Ted Quigley: “A lesson: before April 2005, there were lots of “Catholic prophets” who had forecast that the next pope after JP2 would come an antipope, etcetera. One distributor of the messages from these supposed prophets was deluged with protests after Benedict XVI was elected and soon proved to be a marvelous pope.  After that big miss, I eventually let my subscription lapse from that distribution list of supposed prophecies.”
+
It’s said a priest in South America prophesied, a short while back, “I saw Pope Benedict XVI being prepared for burial. I asked myself, ‘Will the Pope Emeritus go to the Father’s house in 2022?'”
+
Of course, it’s a possibility many expected to materialize. We’re looking into the priest’s visions and will report back to you.
+

A final word on papal luminosity: When Pope John Paul II arrived on one trip to the U.S. at the airport in Baltimore International Airport, a photograph of his plane on the tarmac [left] showed a “reflection” that resembled a towering angel over the aircraft!
++
The point: we are not alone. The supernatural swirls around us. When we tap into it, the result can be luminous and miraculous.
+
[Michael Brown pilgrimage, Italy]
+
ShareTweeteMail