A priest gave a homily last month on the truth, a stark message on the prevarications of our times.

His point: even though lying is rampant, the truth always comes out.

His other point: there is the fog of untruth all around, in all segments of society.

He was taking off on Mark 4:21, wherein Jesus says to his disciples, “Is a lamp brought in to be placed under a bushel basket or under a bed, and not to be placed on a lampstand? For there is nothing hidden except to be made visible; nothing is secret except to come to light. Anyone who has ears to hear ought to hear.”

Thus, yes: In the end, the truth always surfaces, whether here or in the hereafter. The reason is simple: God knows everything!

That includes when we tell “minor” untruths; for they are not small matters — against one of the Ten Commandments. There is no justification but perhaps in extreme cases, such as deceiving a murderer or other enemy in order to save a person’s life. But in the normal course of life? No. Not even in small matters, such as false flattery, is deceit acceptable. As a commentator notes, “When a car salesman asks, ‘How much money do you make?’ the wise answer [when we do not want to answer] is, ‘Not enough to be cheated by you!’ In the case of the criminal looking for your wife, or of the Nazi soldier looking for the Jews hiding in your basement, these are not the ‘neighbors’ spoken of the Ninth Commandment, at least not in that capacity.” As the Catholic Encyclopedia additionally points out, “St. John Chrysostom held that it is lawful to deceive others for their benefit, and Cassian taught that we may sometimes lie as we take medicine, driven to it by sheer necessity.

“St. Augustine, however, took the opposite side, and wrote two short treatises to prove that it is never lawful to tell a lie. His doctrine on this point has generally been followed in the Western Church.”

We fool ourselves when we think there are fibs or “harmless” lies. Any untruth must to atoned for. And there is no such thing as a “white” lie. Our souls are sullied. There are stains. We are in bondage to any falsity until it is confessed and expiated (atoned for). A lie is a lie and the truth is the truth, and so there is that other famous line from Scripture: “You shall know the truth, and the truth will set you free” (John 8:32).

It may not seem that way in the here and now — on earth. The truth is not always the least painful course, initially. But in the end it always relieves the soul to be utterly truthful (with mercy) because the soul knows when it is embrangled with a transgression and that burden weighs on it, causing it to fear death. Your innermost “you” knows when there is something “in the muck” that must be purified. If you fear death, ask the Holy Spirit to expose to you the truth of what must be purged from your spirit, especially during Lent. 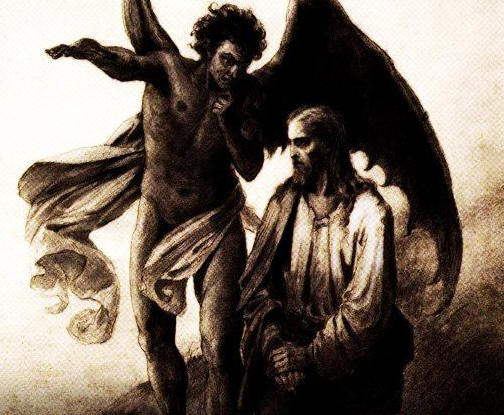 For who is the Great Deceiver? And are we not in league with him when we deceive? Interesting it is that the first stage in exorcisms, according at least to the late writer Malachi Martin, is breaking down the “pretense.” Dark spirits form a fake persona. They pretend to be what they are not. They cause us to do the same. Thus, lying is a barometer of evil. If you choose to believe a lie, you lie to yourself.

God obliges us to always seek and serve the cause of truth; as Jesus said, “Let your ‘Yes’ be ‘Yes,’ and your ‘No,’ ‘No’” (Matthew 5:37). Paul writes, “Each of you must put off falsehood and speak truthfully to his neighbor” (Ephesians 4:25).  There are no asterisks after those statements.

The wise man prays in Proverbs 30:8: “Keep falsehood and lies far from me.”