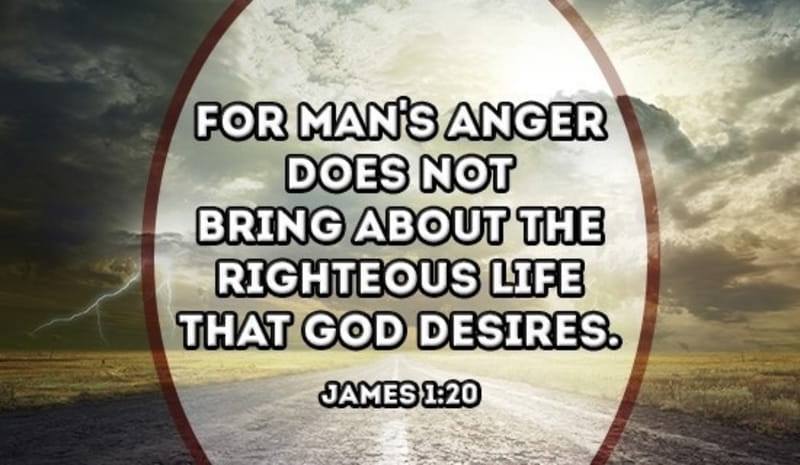 It’s intriguing — what happens, in some cases, when one spells a word backwards.

We’ve often cited the word “evil”: Turn that one around and it’s “live.” There’s “mad:” Reverse that and you get “dam.” (There is “stressed”: in reverse that’s “desserts”!)

All kidding aside: back to “mad.”

“You’re a damn liar.” “B——t.” And of course, the f-word — now fashionable even among politicians. Rage sells! Once in a while, you’ll even hear an off-color word from the pulpit.

Anger is a great deception of our time — sweeping up everyone, it seems, these days, everywhere. Have you noticed the language that’s used all around us — even profanity in the guise of righteous indignation?

At Mass the other day, an elderly (ninety-year-old) priest related a little parable. There was a woman, he said, who exploded in rage when the car in front of her didn’t move fast enough to make a yellow light. She was in a hurry, this woman. So she exploded. She swore. Shouted at the car stopped in front of her. Raised a crude middle finger. Very frustrated.

On her car was a fish symbol, on her license frame was the word “Peace,” and on a bumper-sticker, “Jesus loves.”

A cop happened to be behind her, said the priest, and pulled her over, asking for all her credentials, which she nervously handed over.

After a long while the officer strutted back to her car and told her she finally could go. “It’s just that I thought, after I saw and heard what you did,” he said, referring to the bumper sticker, “that you must have stolen the car.”

It gets us into trouble, does anger. It stymies and taints the spirit.

For it’s true: anger is a block, a hindrance, a dam. It causes things that are negative to build within us. And it’s easy to get “dam mad”: the enemy supplies all the inspiration you need (and then feeds off your anger).

Developing positive thoughts is what purifies and readies us for Heaven (and keeps Satan at a distance).

This is critical in our time: to forgo argument and replace it with prayer, blessing everyone. When we pray for others — for those with whom we disagree, and who may even insult us — we break the spell they otherwise cast upon us (when they successfully elicit negative emotions).

Listen to Scripture, not vitriolic debate.

“In your anger do not sin,” says Ephesians 4 (26-27). “Do not let the sun go down while you are still angry, and do not give the devil a foothold.”
+
Proverbs 29:11: “Fools give full vent to their rage, but the wise bring calm in the end.”
+
“Do not be quickly provoked in your spirit, for anger resides in the lap of fools,” states Ecclesiastes 7:9.
++
Colossians (3:8): “But now you must also rid yourselves of all such things as these: anger, rage, malice, slander, and filthy language from your lips.”
+
“Better a patient person than a warrior, one with self-control than one who takes a city,” says Proverbs 16:32.
+
“Do not let any unwholesome talk come out of your mouths, but only what is helpful for building others up according to their needs, that it may benefit those who listen,” says Ephesians 4 (29-31).
+
“Get rid of all bitterness, rage and anger, brawling and slander, along with every form of malice.”+
+
“But I tell you that anyone who is angry with a brother or sister will be subject to judgment,” said Jesus (Matthew 5:22). “Again, anyone who says to a brother or sister, ‘Raca,’ is answerable to the court. And anyone who says, ‘You fool!’ will be in danger of the fire of hell.”
+
Should we not listen to Christ before we listen to a post on social media (or a bile-spewing commentator)? Anger hovers. It enshrouds. It is tremendously clever.
+
It is divisive.
+
It has been effective: It sells.
+

It is making those who once loved hate.

It is making the devout scornful (and worldly).

It is creating cults of every sort (religious, economic, political).

It is drawing the ensnared to extremes.

It engenders hatred in the guise of righteous indignation.

It has made good seem evil and evil good.

It is very slick, charismatic, bold in its lies.

It has cast a net.

Be careful you not already ensnared in it.

It is arrogant, is the spirit of pride, of Odin. It disdains, and insults. It posits and posts the negative. It has no time to hear anything but what it already thinks it knows.

And it leads to the netherworlds of purgatory.