With the latest surge of the coronavirus pandemic beginning to wane but still stubbornly preoccupying the world, perhaps it’s not too late to wear what they call “the little Badge”: small pictures one can carry of the Sacred Heart or an image of the same placed in the home.

Our Lord revealed to the Sacred Heart visionary, Saint Margaret Mary Alacoque, His wish for her to order just such an image for veneration, according to the blog “America Needs Fatima.” 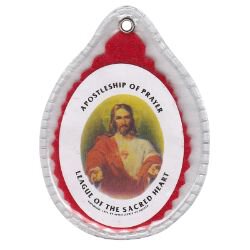 The saint herself always kept an image with her, as did her novices, and sisters in the convent, who made thousands of the Sacred Heart Badges.

In a revelation to another nun, Venerable Ana Magdalena Remuzat, the Lord reportedly foresaw a serious epidemic in the city of Marseilles but that its denizens would receive supernatural help through the devotion.

“Mother Remuzat, helped by the sisters in her convent, made thousands of Sacred Heart Badges, and distributed them throughout the city where the plague was rampant,” says the blog, which offers them, as do we [see below]. “Soon afterward, the epidemic stopped. As if by a miracle, many Badge wearers were not infected and even people who got sick experienced extraordinary help through the Badge. Analogous events happened elsewhere. From then on, use of the Badge spread to other cities and countries.”

So the thought comes: in situations where one must wear a mask, how about the Sacred Heart on it? Is this not a means of evangelization as well as heavenly protection?

The Badge has also helped through various uprisings and wars.

Whether the small Badge, a painting of the Heart, or a simple prayer card of the Sacred Heart, one assumes they all accomplish the same.