Recently a friend of ours from Long Island, New York, wrote us a note and enclosed what she called “Pardon Crucifixes.”

It turns out there’s quite a devotion attached to such Crucifixes. We’ll get to that in a moment. She explained that she has several of these “that turned gold after they were placed in front of the Holy Face of Jesus that was touched to the original one when we were in Knock, Ireland [the famous site of apparition].”

The Holy Face campaign is rooted in the approved private revelations to Sister Mary of St. Peter and Blessed Maria Pierina De Michelli. More on them in the coming days.

In Ireland the campaign to spread devotion to the Holy Face, according to Human Life International, started “because the souls of young people in Ireland are under serious attack. Some of the major threats to the youth of Ireland include: growing ridicule of Church teachings and the Most Holy Eucharist; sex education and gender confusion ideology; and a so-called ‘Abortion Bus’ distributing ‘abortion pills’ in Irish universities.”

This was instantly interesting: for of late we keep hearing more and more about the Holy Face. Its devotion seems to be coming in waves, as anointings often do. And here we have this Crucifix linked to it. The friend, Andrea and her husband Patrick (Walshe) are highly credible Catholics who have an array of statues that have exhibited phenomena.

“The funny thing,” wrote Andrea, “is that it seems to be only the Pardon Crucifixes that turn gold. I have put different medals there but nothing happens.

“The longer the Crucifixes are in front of the Holy Face, the brighter the gold. The very bright gold ones we had were given away — these three [which she enclosed] were about three days in front of the Face.”

And so that led us to do a bit of research, during which we found a website, Catholicism Pure and Simple, that explained a number of things.  “What is a Pardon Crucifix?” it started. “It’s a thorn in Satan’s side, slammed in there by our good Pope St. Pius X. It is unclear why so few Catholics have ever heard about this sacramental. But, what is clear is that Satan absolutely hates it. 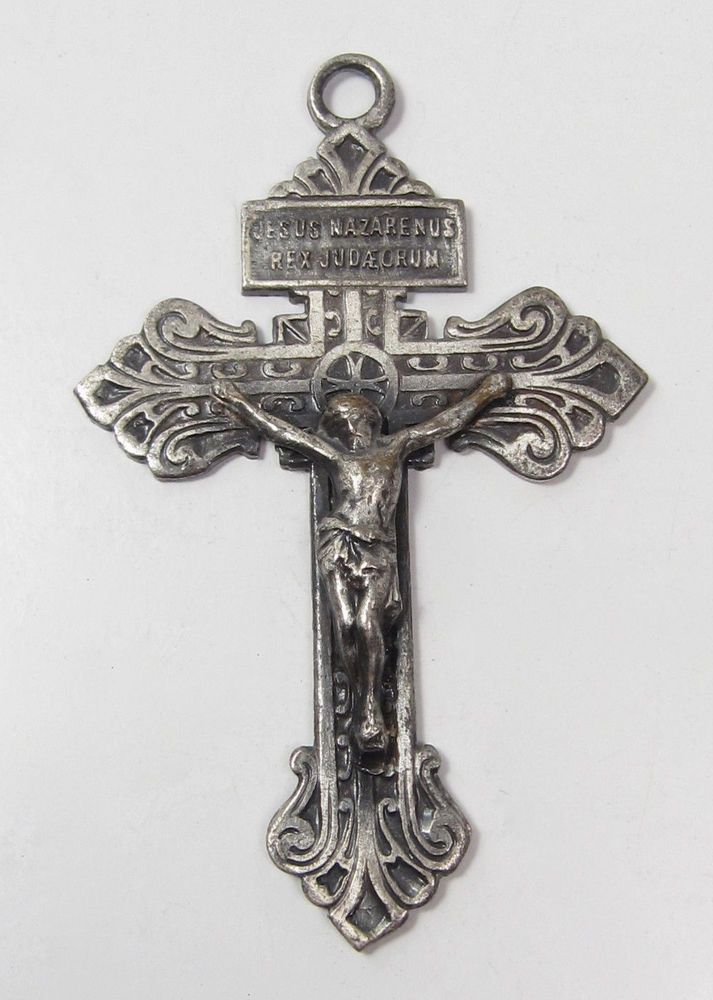 “Because the Pardon Crucifix ranks up there with the the Miraculous Medal and the St. Benedict Medal.  You see Pope St. Pius X used the keys to Heaven to attach heavenly rich indulgences to it.  And Satan hates powerful sacramentals.  What does he do when he hates a devotion or sacramental which is so immersed with Divine graces?

“He simply hides them. And the Pardon Crucifix has been hidden sometime after it was promulgated in 1905. Other examples 0f Satan’s dirty work include him literally hiding the Shroud of Turin (Jesus’ burial cloth), the true Cross and  St. Philomena. How about how he perverts devotion to the Rosary, Miraculous Medal and Our Mother of Sorrows?

“Yes, the Pardon Crucifix is beautiful; however, it is the words describing the indulgences/Divine graces that blow you away.”

Pope St. Pius X, who granted these indulgences, stated that:

“This Crucifix was introduced at the Marian Congress of Rome in 1904, with the support of his Eminence Cardinal Coullié, Archbishop of Lyon. It was through the discourse made to him by the Frs Lémann that the crucifix obtained general approval. The project of a union around this crucifix was presented to His Holiness by the most Eminent Cardinal Vivès, president of the Congress.

“The historic and sacred inscription of the royalty of Jesus appears in inscription placed over the head of Christ [on this Crucifix]. It is an irrefutable witness against the denials and audacity of impiety. There is preserved at Rome, in the Basilica of the Holy Cross of Jerusalem, the actual inscription of Golgotha recovered by St Helen. The written relic is not complete; there may have been a division, and also age has considerably reduced it. Two words, only two words shine forth, respected by time, Nazarenus Re, The Nazarene King. It is a prophecy written on wood: all royalties are passing, except that of the Nazarene.

“On the reverse of the Cross, at the center, the Sacred Heart shines forth with two inscriptions recalling the tender mercy of the Saviour; one is a prayer of pardon, breathed forth in the agony of Calvary: Father, forgive them; the other is the prayer of love breathed forth against ingratitude, in the sanctuary of Paray-le-Monial: Behold this Heart which has thus loved men.

“Below, the figure of Our Lady surmounted by a star occupies the foot of the cross, which is truly the place of Mary. She stands there to say to every straying soul: ‘Do not forget the sorrows of your Mother.’ She says, ‘I am the comforter.’ Despair murmurs that it is too late; she says: ‘between late and too late there is an abyss, behold all the Blood of My Jesus, behold my motherly devotion for you’.”