Didn’t Jesus teach that what defiles us is not so much what goes in us (in the way of food), but what comes out of our mouths?

Doesn’t Scripture (James 3:5-6) warn that the size of the tongue is no measure of the power it wields – that just as the tiniest of sparks can ignite a great forest fire, the smallest of words, unwisely spoken, can cause immeasurable harm?

And how true this is — not just pertaining to gossip and slander but profanity. The “immeasurable harm” is often to ourselves.

If you accept the discernment of a preacher named Kenneth Scott, who seems well-versed indeed when it comes to the Bible, it’s not just the G–d— and J—– C—– curse words people so frequently utter, though these are the worst (better classified as outright blasphemy: a mortal sin). In fact, those expressions are not just ill-use of a Name or affronts but curses against the Creator of the universe.

But watch for other words as well, for Scott argues, in a book called The Witchcraft of Profanity, that even words representing, for example, excrement, can raise spirits that then cleave to us or others.

That sullies us. And how many are dirtied by their mouths — from comedians to major politicians — in our time. A highly popular podcaster who had made the use of profanity a trademark of his broadcasts (especially the f—– word) actually looks dirty. That’s because foul language brings an unclean spirit. If you listen to them talk in such a manner, or immerse yourself in a movie with expletives (and especially the Lord’s Name), your own countenance has been darkened and needs to be cleansed (through prayer and Confession). Only a pure-white soul can gain direct entry into Heaven.

So don’t do what the world around us is doing. Don’t curse or sully yourself.

“It’s nearly inescapable in our time, from the workplace to the store to the stadium to the theater and (perhaps especially) to the internet,” says another writer. “Sometimes we have full control over the situation and can leave or put it to a stop, and sometimes we don’t. In some cases we have an opportunity to evangelize the person using the language, perhaps giving more of a reason to endure it. In others we won’t.”

“Most people think that only witches and sorcerers can put a curse on someone,” writes Scott. “But that’s not exactly true. Because of the

power of our words (as speaking spirits), Christians can (ignorantly) use that power in the negative to put a curse on someone’s life just as effectively as a witch or sorcerer.”

Words — he argues — draw forth actual spirits. “Death and life are in the power of the tongue: and they that love it shall eat the fruit thereof,” says Proverbs (18:21).

Don’t read on if you are easily offended. For we have to discuss various expressions that are scatological. How many “good,” God-fearing, active Catholics have you heard use words like s–t ? We have even heard this from the pulpit (when the person giving the sermon is trying to be “cool”).

“Many in our society say that the use of profanity is harmless,” says Scott. “They say profanity is only harmful to the ears of those who are self-righteous” — especially simple “potty-mouth.” But “as Christians, we must be careful not to allow the influence of the world to form our opinion.” 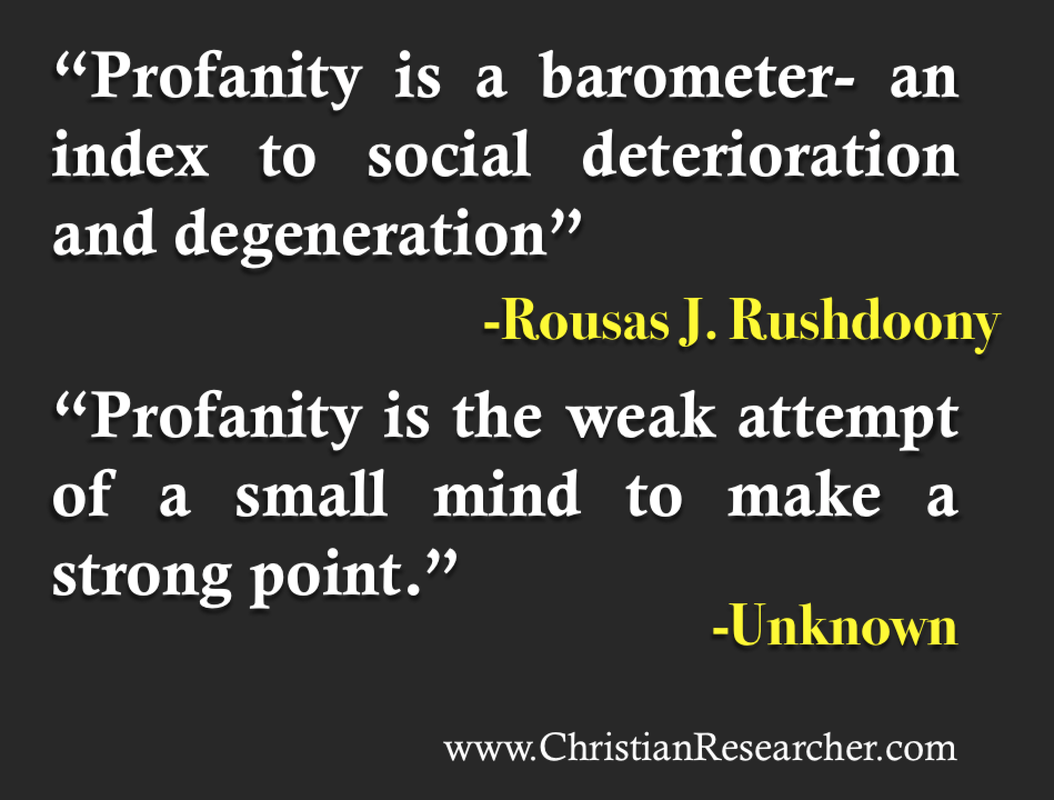 Sobering it is to consider that in Jesus’s time, the word “raca” (which means dumb, stupid, or empty-headed) was like a four-letter word. How much worse things have become (witness labeling a person a foul body part) — and raca was a word that the Lord said could cause a person to face “the council”!

Profanity is rebellion and 1 Samuel 15:23 tells us that “rebellion is as the sin of witchcraft.” There you see, again: how the wrong spirits are raised!

“When a person uses profanity (even though they do not know what they are doing),” says Scott, “they are doing the exact same things. Just as witches and sorcerers use words, spells, and incantations to bring up evil spirits for their evil purposes, profanity does the same thing.”

The profanity used for fornication (the “f” word) can bring forth spiritual fornication or even imply the violence of rape. “When someone uses these terms, it is a demonic summons for evil, demon spirits to have sexual intercourse with them or the person to whom they are aiming or speaking these words,” he claims (for our discernment). “It is a general call for all kinds of unclean spirits to move in and out of them at will. If that person’s spirit is open and not carefully guarded, demon spirits will come up (upon the use or request of these words) and attempt to dwell upon and within them.”

Might some of this be going too far? Perhaps. At any rate, give it some thought. Harmless profanity — like the b—h word? It taints. Even BS does. Do you really want to say, “I’ll be damned”? Do you want to hear others assault the holiness of God Himself?

Even proxy words (gosh darn and and endless array of others) are wrong, to some degree, if the intent is to imply what the actual profanity says. “The spiritual law of association works the same way,” Scott postulates. “If you closely and affectionately affiliate yourself with someone who has a spirit, or even a curse upon their life, you put yourself in a situation to also become part of their curse or penalty.”

Can using the expletive “hell” raise some of what is in the fire?

Thoughts to consider at this time of disorientation.

“I will set no wicked thing before mine eyes: I hate the work of them that turn aside; it shall not cleave to me,” says Psalms 101:3).

Start with that, as a cleansing prayer.