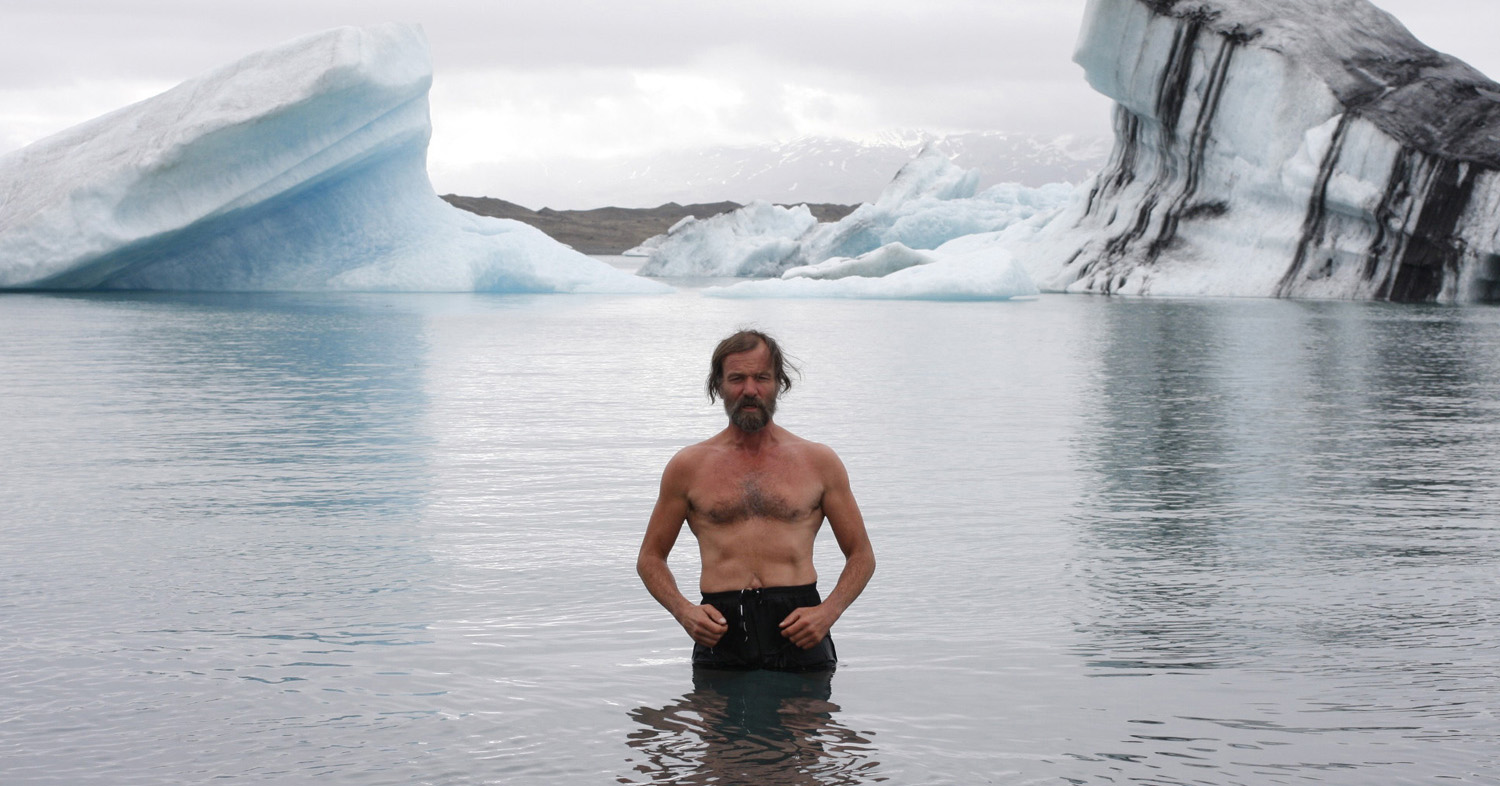 Could it actually be true that a fellow from the Netherlands can control his body to the point of swimming more than fifty yards under ice on a single breath, enduring direct contact with ice for nearly two hours, and even marshaling his immune system to fend off deadly bacteria, all through the power of deep contemplation/meditation?

There is truth to at least most of it: Wim Hof has been documented accomplishing feats such as ascension to 23,500 feet on Mount Everest wearing only shorts and shoes, and running — a full marathon — on the Namib Desert (with no water). He seems able to go into a deep mental state and issue commands even to his bone marrow. He teaches that humans have a buried ability to control the body’s response to many extreme conditions, just as animals can endure tremendous extremes in temperature. He also ran a marathon in the Arctic Circle clad in those shorts and hung from 2,000 feet on another highland by one finger, through sheer concentration.

This is a brilliant guy who can talk with ease in terms of “prefrontal cranial lobes” and the intricacies of hematology. Mind over matter?

It’s not just a physical matter, perhaps. “The related g-Tummo practice [he practices] is called ‘psychic heat’ practice because it is accompanied by intense sensations of heat in the spine,” notes an online source. “It involves special breathing accompanied by meditation involving mental images of flames at certain locations in the body. There are two types of breathing, ‘forceful’ and ‘gentle.’ A scientific study found that only the forceful type results in an increase in body temperature, and that meditation was required to sustain the temperature increase.”

Translation: when you look deeper into the matter — and photographs of Wim are admittedly amazing — he clearly is, however, a practitioner of what the Vatican, in its document “Jesus Christ, the Bearer of the Water of Life,” has deemed a New Age practice: yoga.

There are those who claim great benefits from it. There are those who have relieved anxiety. Some medical literature suggests it may reduce atrial fibrillation (irregular heartbeat) by up to forty-five percent. It is taught even in some Catholic church halls. Those who say the exercises have been healthful argue that they are doing only the physical postures and exercises of yoga, not the Hindu chanting that is part of yogic spirituality (which is based around multiple “gods” and the power of the “kundalini shakti,” which translates as “serpent power”).

The problem is that Webster’s itself defines it as “a strict system of Hindu philosophy, strict spiritual discipline practiced to gain control over the forces of one’s being to gain occult powers…”

Some say that those simple postures (and contortions) give honor to Hindu deities.

And some of the photographs of Wim are a little spooky (though we’re all entitled to awkward photos).

We’ll leave it at that.

Exercise is excellent — and physical control more so. Discipline can achieve many things! It is a key to spiritual development. Saints have been known for wondrous feats of endurance (Padre Pio went through a major surgery with no anesthesia, and of course Jesus endured the impossible). But one must step gingerly.

Several weeks ago was a news story about a woman named Amanda Eller who a month ago felt drawn to go to the Makawao Forest Reserve on the Hawaiian island of Maui to connect with nature and get “grounded.” The 35-year-old physical therapist — who is also a yoga teacher — figured she’d go for a hike, spending a couple of hours in the woods.

She said she listened to her sense of guidance, which instead of taking her back to her car, took her on a 5-mile journey, one she called a “spiritual boot camp.”
+
Eller ended up spending 17 days in the woods, trying to get back to her car and then just trying to stay alive and catch the attention of searchers in helicopters. Here was the headline in another news outlet: “Yoga Teacher Says Voice Guided Her Before Getting Lost In Hawaiian Jungle.” Seventeen days is a long time to be lost.
+
“I don’t really know what happened,” she said, speaking to reporters while in a wheelchair. “All I can say is that … I have strong sense of internal guidance, whatever you want to call that — a voice, Spirit, everybody has a different name for it.”
+
Guidance?
+
There are better ways, Amanda and Wim. There are better ways.
+
(Excuse any language in videos)
ShareTweet