A number of topics to peruse. There is the issue of vaccinations: New York is mandating that kids in parts of Brooklyn receive the MMR (measles-mumps-rubella) vaccination or face a fine, in the face of a measles outbreak.

Didn’t we all have measles as kids? Can’t we naturally build immunity?

It is, though, yes, potentially dangerous, even fatal: especially in this time when immune systems are compromised. So this is a very difficult issue.

There are legitimate concerns about vaccines themselves. Those opposing them do so primarily from concerns about the health effects of sundry and various chemicals/adjuvants in the concoctions (including cow serum, pig derivatives, and in some vaccines, though no longer ones as prevalent as the measles one, the compound thimerosal — which is mercury, and which, it is feared, has led to autism).

It also long has been said that certain of the vaccinations contain cell lines derived from abortions. Other reports deny it. Which is it? On Tuesday The New York Times, in a report on vaccines and ultra-Orthodox Jews (who often reject vaccination), said in one popular handbook opposing vaccines “are false warnings that vaccines cause autism and contain cells from aborted human fetuses.” On the other hand the National Vaccine Information Center says a popular one called the MMRII vaccine is in fact “derived from the lung tissue of a three-month human female embryo” while a second, Merck’s ProQuad, comes in part “from lung tissue taken from a 14 week aborted fetus and contains viral antigens.”

Fascinating, heartbreaking, and sobering — often alarming — is what’s transpiring in Venezuela, where the mystic Maria Esperanza — who lived in Caracas — once said, “It will start here.”

“It”? Did she mean civil unrest? A breakdown in infrastructure? Natural disasters? There have been aspects of all these.

Or all of the above?

We’ll continue to watch, as we will also continue to maintain a prophetic eye on the issue of immigration, especially in Europe, where often hostile Sharia-laden Muslims have been swarming into nations such as England and France.

Europe has been invaded by Islamists many times in the past (they were once called “Moors”), and now there is an invasion of a different kind. Says one prominent prelate, Cardinal Robert Sarah of French Guinea in Africa, “If the West continues in this fatal way, there is a great risk that, due to a lack of birth, it will disappear, invaded by foreigners, just as Rome has been invaded by barbarians.” In an interview, he urged Europe to avoid embracing materialism and forgetting its Christian heritage, warning that it could lead to the extinction of Europe itself.

Perhaps more intriguingly, Cardinal Sarah states that “the spiritual crisis involves the entire world. But its source is in Europe. If Europe disappears, and with it the invaluable values of the old continent, Islam will invade the world. And we will totally change culture, anthropology, and moral vision. People in the West are guilty of rejecting God.”

In other words, he is saying that many of our advances have been of human and not Godly origin.

This ties in with the Madonna of Medjugorje, who years ago — in the early 1980s — said in a message that Russia would one day rise as the seat of Christianity because “the West has progressed, but without God.”

(Perceptive stuff. Prophecy unfolding before our eyes. Listen to the courageous cardinal further: “Gender ideology is a Luciferian refusal to receive a sexual nature from God. Thus some rebel against God and pointlessly mutilate themselves in order to change their sex. But in reality they do not fundamentally change anything of their structure as man or woman. The West refuses to receive, and will accept only what it constructs for itself. Transhumanism is the ultimate avatar of this movement. Because it is a gift from God, human nature itself becomes unbearable for western man.

“This revolt is spiritual at root. It is the revolt of Satan against the gift of Grace. Fundamentally, I believe that Western man refuses to be saved by God’s Mercy. He refuses to receive salvation, wanting to build it for himself…”)

Interesting it is to note the recent discovery of a sarcophagus artifact in Egypt. Said a London tabloid, “Nestled on top of the perfectly-preserved mummy were a gold scarab and an ISIS cross. The pair of objects signified the person buried in the tomb had a high status – possibly a high priest. A golden ISIS ‘cross’ was typically used as a symbol for the Goddess who was believed to wield great magical power” [caution with tabloid link]. 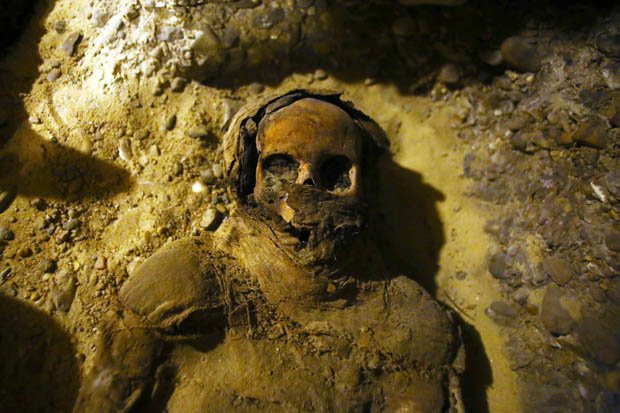 An interesting coincidence, that in an “accursed” ancient Egyptian tomb a cross has been found signifying a goddess with the same name — “ISIS” — as the terrorist group, which, we come to learn, takes its name from her.

So there we have it: an occult force behind what is represented as a religio-political organization. By their fruits we know that.

As Wikipedia notes, “Isis was a major goddess in ancient Egyptian religion whose worship spread throughout the Greco-Roman world. Isis was first mentioned in the Old Kingdom (c. 2686–2181 BCE) as one of the main characters of the Osiris myth, in which she resurrects her slain husband, the divine king Osiris, and produces and protects his heir, Horus. She was believed to help the dead enter the afterlife as she had helped Osiris, and she was considered the divine mother of the pharaoh, who was likened to Horus. Her maternal aid was invoked in healing spells to benefit ordinary people. Originally, she played a limited role in royal rituals and temple rites, although she was more prominent in funerary practices and magical texts.” (Horus is the “god-demon” invoked by those who want indeed to dechristianize the West.)

And so it goes this Lent! We have challenges on many fronts, do we not?

Funny though — how, during prayer and fasting and reading the Bible, during the Stations, during the Scriptural Rosary (in the midst of very-early morning prayer), what daunts us, what seem like monumental insurmountable frightening global developments, appear… so much less so… when Jesus on the Real Cross is at center stage.