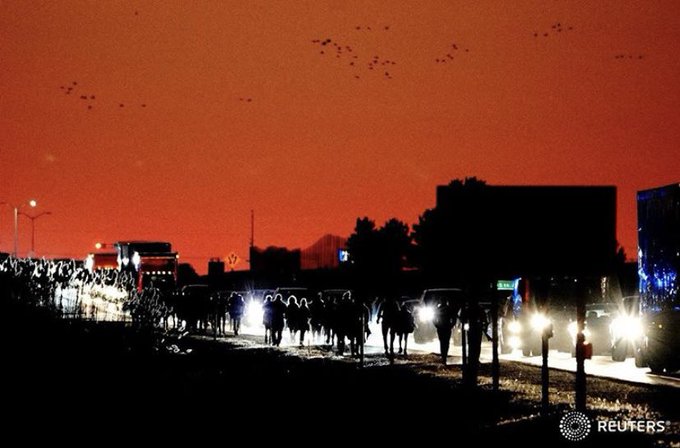 No matter who wins this week’s, or this month’s, election, there will be unsettlement and at the very least sporadic protests in the United States, some violent, most verbal, all divisive; Word War, especially on radio, cable, and in social media.

There is the ambience of incipient civil war. The cri de coeur: My way or the highway.

If a resurgent President Donald J. Trump wins, there is guaranteed to be prolonged disruption by Black Lives Matter and affiliated groups, along with the more radical Antifa. especially if the election is close (and now we know that the edge will be razor-thin). Some of these protests will be major, at the level of Sixties riots. They will extend over months. Coming to a city near you.

If former Vice President Joseph Biden is the victor, there will be deep discontent on the opposite end of the spectrum, burbling into demonstrations and blockades across the U.S. Already, supporters of the current president have halted traffic on one of two major highways in New Jersey and on major bridges — the former Tappan Zee (now named for former Governor Mario Cuomo) — into what was (and perhaps one day will again be) the great City of New York.

It is hard to see an immediate future without unrest.

Both sides are well-armed.

It is a matter of how far and long it goes. It is a need for prayer, which alone unites us.

There is the prospect that it will span far indeed.

Such demonstrations will erupt even during any prolonged election counting.

And they will occur, here and there, if not in wide swaths, even if there is a landslide (though to a lesser extent).

There is deep bitterness in the land, exacerbated by the frustrations of covid.

America, a volcano, its lava seething underground. There is the distinct possibility that there will be an explosive eruption of the dome, the magma chamber, as opposed to simple smoke and hot rock.

And it is not alone, is America: there is a spirit of upset around the world, from France — where radical Islamists again abuse Christians and Jews, with no commensurate response — to protests in Third World nations.

In the middle of it all is the Catholic Church, which manages to get hit from all sides, and also internally [but manages to remain — this 2,000-year-old institution! — as the bulwark].

If it doesn’t seem logical that protests against police violence and historic statues would turn into church desecrations and arson, that’s because it is not operating in the realm of mere rationality but in the supernatural, where so many perturbations originate.

A spirit of anarchy has descended, precursor to authoritarianism that sooner or later will coalesce, very possibly in our lifetimes; probably after economic crises and/or natural disasters; possibly sooner rather than later.

The question is whether it will be authoritarianism from the left (see, Davos and Big Tech) or right.

There is upset in the Catholic Church, with open criticism of the Pope, even by a cardinal and archbishops. Many have politicized the Chair of Peter.

The end game is not yet clear. It won’t be for years. This is a long-term trend (part of the long aforementioned “signs”).

Even a Jewish cemetery was desecrated in Michigan Monday with political graffiti.

And so, buckle up.

The upsets we have seen in nature — especially in recent days (hurricanes, wildfires) –will now manifest in one way or another, to one degree or another, in the societies of men, who far too often act as if no God looks down upon them.

[Added a SD story from a year before that: “A couple recent reports point out the potential, in current societies, for great coming upheaval. Wrote one columnist recently: ‘Apocalypse is not yet upon our world as the 2010s draw to an end, but there are portents of disorder. The hopes nourished during the opening years of the decade — hopes that America was on a progressive path toward growing equality and freedom, hopes that technology held answers to some of our most pressing problems — have given way, with what feels like head-swiveling speed, to a dark and divisive new era. Fear and distrust are ascendant now. At home, hate-crime violence reached a 16-year high in 2018, the F.B.I. reported. Abroad, there were big geopolitical shifts. With the rise of nationalist movements and a backlash against globalization on both sides of the Atlantic, the liberal post-World War II order — based on economic integration and international institutions — began to unravel, and since 2017, the United States has not only abdicated its role as a stabilizing leader on the global stage, but is also sowing unpredictability and chaos abroad. A 2019 Freedom House report, which recorded global declines in political rights and civil liberties over the last 13 years, found that “challenges to American democracy are testing the stability of its constitutional system and threatening to undermine political rights and civil liberties worldwide.'”]

[Further footnote: The words of a Brazilian seer in an October 27 “message”: “My Heart will be the lightning rod against God’s justice that will fall forcefully against ungrateful sinners. My Heart will protect you in the most difficult moments that will come for the Church and the world very soon. Disobedient men will suffer greatly because of their deafness in not listening to what God is saying to them. God does not love disobedience. God does not love sin. Change your lives, because very soon the Holy Church will be wounded in a cruel way and the despair of the poor, abandoned, and wounded flock will be great. Pray, pray, pray much and God will have mercy on each one of you and on the whole world. I bless you all: in the name of the Father, the Son, and the Holy Spirit. Amen!”]