It was all over the news, two weeks ago and still: a Bible held aloft by the president of the United States in front of a famous church near the White House, the basement of which had been damaged during protests the night before. Controversy erupted when a second, less volatile crowd was dispersed from the area the next afternoon by police wielding flash-bang grenades and tear gas, with the president then making his appearance.

We’re not here to toss political footballs to and fro. We are curious about that Bible. What kind was it? Where did it come from? Does it bear significance (beyond the inherent significance of any Bible)?

When asked by reporters as they stood in front of St. John’s Episcopal Church (the “Church of the Presidents”) if what he was holding was a family Bible, Trump responded only, “It’s a Bible.” 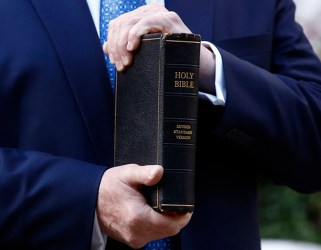 Subsequently, reports noted that it was the Revised Standard Version (RSV). The media tried to make hay with the fact that the RSV is considered a liberal translation, opposed by evangelicals. (The most controversial verse in the RSV can be found in Isaiah 7:14, where the word “virgin” is translated as “young woman.”)

When Mr. Trump was sworn in as president, he joined a handful of presidents who took the oath of office on two bibles. One of them, a RSV, had been a gift from his mother given days before his ninth birthday, which Mr. Trump has kept since 1955. He has cited the Rev. Norman Vincent Peale, a pastor and the author of “The Power of Positive Thinking,” as one of his earliest religious influences. Again, controversy: Peale was a Christian and also a Freemason. But let’s go beyond the constant political contention that finds a controversy everywhere, and get to the origin of that Bible.

For intriguing it is. Was it the same RSV? And does it have a nearly mystical connotation?

The story goes, notes one website, that on the Scottish Island of Lewis in the village of Barvas in the late 1940’s lived two elderly women, Peggy and Christine Smith. They were eighty-four and eighty-two years old respectively, Peggy blind and her sister almost bent double with arthritis. Unable to attend public worship, their humble cottage became a sanctuary where they prayed fervently and “met with God.”

One night Peggy supposedly had a revelation: revival was coming, she was “told,” and the church of their fathers would be crowded again with young people. “She sent for the minister, the Reverend James Murray MacKay, and told him what God had shown her, asking him to call his elders and deacons together for special times of waiting upon God,” says one rendition of the story. “In the same district a group of men praying in a barn experienced a foretaste of coming blessing.”

As foreseen, between 1949 and 1952 a widespread revival swept through these islands in answer to the prayers of God’s people. It became known as the Hebrides Revival, and among those converted was a fifteen-year-old boy named Donald Smith who was related to the two women, found conversion during the revival, and was an outstanding helper at spiritual gatherings, a “frontline” prayer-warrior. According to a blog, the preacher, Duncan Campbell, once called on Donald at his home and found him on his knees in the barn with the Bible open before him. When interrupted the young man quietly said: “Excuse me a little, Mr. Campbell, I’m having an audience with the King.” 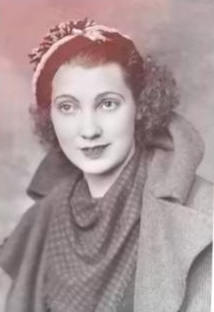 Some of the most vivid outpourings of the Spirit during the revival came, it was said, when the boy was asked to pray. In the police station in Barvas he stood up one night, simply clasped his hands together, and uttered one word – “Father.” Everyone melted to tears as the Presence of God invaded the house. So goes the account.

Enter onto the scene a woman named Mary Anne Smith MacLeod, niece of the two intercessors in the Hebrides Revival and cousin of Donald Smith. She had emigrated to the U.S. in 1930 and was not part of the revival. The succinct point is that she met a gentleman named Frederick Trump. After her immigration the two fervent aunts had sent Mary a Bible. Some say it was a Bible used during the revival, others that it couldn’t have been, that the RSV version was printed after the revival took place (1952).

The immediate predecessor was the American Standard Version.

The blog says Mary named her fourth child, the future president, after Donald Smith — though another blog notes that Trump was born in 1946 and Smith didn’t “come to Christ” at that revival until 1950. One notes that Trump’s grandfather was also named Donald (making him a likely source for his name). It is hard to part legend from facts.

Our question: Was this the Bible President Trump held aloft?

Alas, the Bible given by his mother is now sitting in The Museum of the Bible, not the Oval Office, say those who discount the story. It is said he carried it with him to Sunday school classes at First Presbyterian Church in Queens, New York. Upon his graduation from primary Sunday school in 1955, the Bible was inscribed by his pastor and Sunday school teachers.

But the one given him by his mother was also a Revised Standard Version, which brings us back to the mystery: is it just any old Bible they could find, for that photograph at the church, or is there special significance behind the Bible he now so famously held? After the event, it emerged that this particular black Bible was carried across to St. John’s Church in Ivanka Trump’s handbag. Still, what Bible was it?

Was it a Bible with no special commemoration or did someone go over to the Museum of the Bible — which is in D.C., less than two miles from 1600 Pennsylvania Avenue — and bring it to the Oval Office before that appearance at St. John’s Episcopal Church? 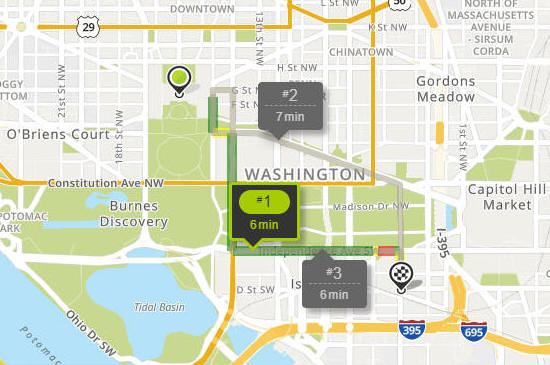