By now, many have seen the “viral” satellite photo of Hurricane Matthew — with swirling clouds forming what looks eerily like a skull (teeth and all).

Or specific to this time in America?

Florida is expected to be pivotal in the presidential race.

Do hurricanes care about elections?

Look closely and when the “skull” formed, Hurricane Matthew was over Haiti — as in Land of Voodoo. Shall we pray?

Perhaps, when images of the demonic are seen in the smoke or flames or clouds of a disaster — as was the case in the smoke of 9/11 — it’s nearly like a snapshot of the negativity being purged from the vicinity.

One can say this much:

The uncanniness joins the fact that the word “hurricane” comes from the Indian word for evil spirit (“hurucan,” “huracn,” or “huracan”). Technically, it is believed to be the Taino tribe of Carib Indians that originated the word and to be precise it may have meant “God of Evil.”

(Others believe it was the Mayans who came up with it as the name for their Storm God — a deity of wind, rain, and fire.)

Wherever it originated, we’re sure of this: Satan is referred to, in Scripture, as “prince of the power of the air” (Ephesians 2), and also fell, speaking of storms, as lightning (Luke 10:18).

“Creepy,” “Demonic,” were two Facebook comments, when we posted the photo Wednesday morning. “Satan has had his chains loosed,” was another.

Nearly as creepy as all those clowns… Oh Halloween!

It is hardly the first satellite image of a storm that has borne what many have interpreted as strange images — as if sent in admonishment.

Hurricane Katrina at one point appeared to some in a way that resembled an unborn child. 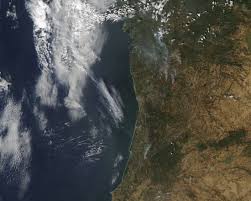 We have seen this — the “fetal” formation — not only with other cyclones, but also photographs of massive California wildfires.

At bottom, what some saw as an “eerie angel of death” in the smoke from a Chilean volcano (volcanoes often have interesting such formations).

It can be argued, of course, that an unborn child

simply has a curvature similar to that of cyclonic wind movements, whether smoke or clouds. Many images are a bit vague; like beauty, in the eye of the beholder.

There are other “images” [above, left, and right] as well; Jesus]?

Clouds of any kind are famous for spotting images. So many through the years have sent us what they see as meaningful examples. We scoff not.

Was it not a bit unnerving, to see satellite photos, meanwhile, of America at night during Hurricane Sandy?