You are excused for wondering if an incipient persecution of the Church — not Christianity in general, but specifically the Holy Roman Catholic Church — is afoot.

From all appearances, it seems that’s the case.

In California, a 429-year-old Franciscan missionary edifice — almost five centuries old — is torched in the dark of night. That was Mission San Gabriel Arcángel, founded in 1771 by Franciscan missionary Junipero Serra — the fourth mission in present-day California established by the saint, whose legacy has been unfairly tainted by overzealous Native Americans who feel missionaries subjugated them. 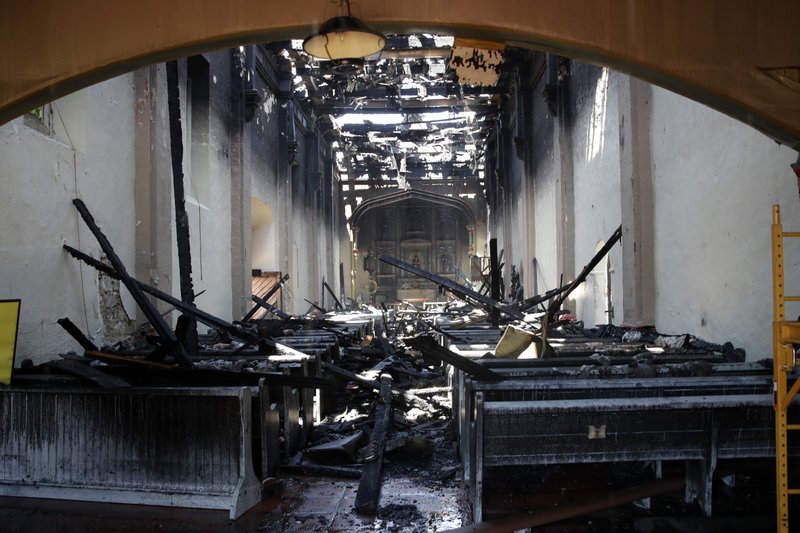 In Florida, a man citing the Book of Revelation (which some Protestants interpret as carrying a passage that links Rome with the seat of antichrist) smashes his vehicle through the doors of a Catholic church Saturday and sets it afire. People were inside, praying.

That was Queen of Peace Catholic Church in Ocala.

Was it not that famous ballad “American Pie” that included the lyrics, “fire is the devil’s only friend”? (Think also: Notre Dame.)

In New York, the same week as the California and Florida incidents, someone sprayed-painted the word “idol” on a statue of the Blessed Mother. Evangelical-Pentecostal-Baptist types often (and wrongly) see saints as idol worship.

The devil — who can use us all — does not like saints. 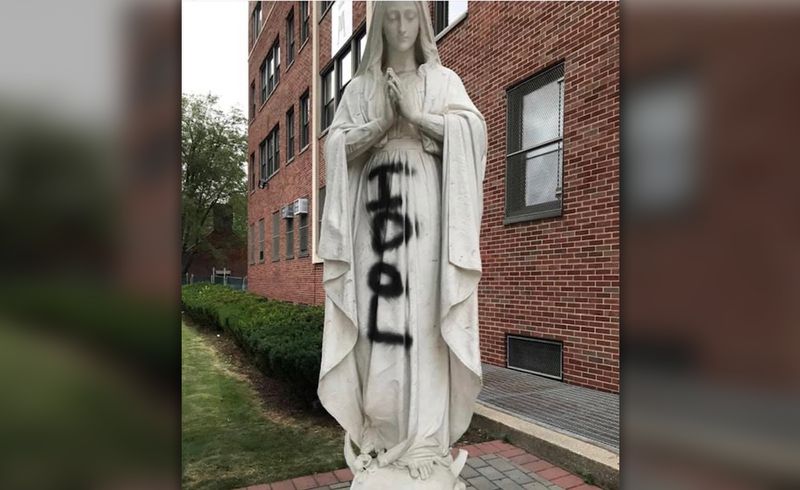 Meanwhile, in Boston, a statue of Mary was partially burned when plastic flowers she held were ignited, covering her with soot. That was at  St. Peter’s Parish on July 12. 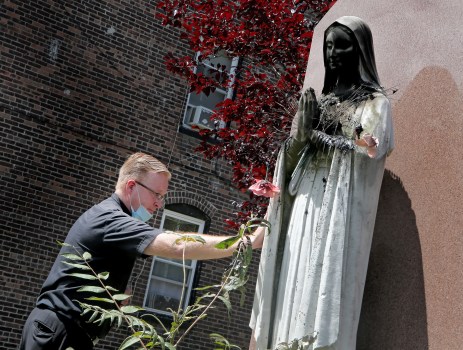 In the Philippines, another Franciscan church — Manila’s Sto. Nino de Pandacan Church — was horribly damaged July 10, its 400-year-old statue of the Child Jesus — a miraculous statue — and hundreds of antique religious artifacts reduced to ashes. Firefighters did not find the image, only its melted crown and metal scepter, a priest said. But the fire did not destroy a consecrated Host. (“When the ciborium was opened, the sacred Host was there,” he related to the media. “This is the biggest miracle. While looking for the image, the sacred Host was found. We were pointed to Jesus.”) Why the sudden and rabid — the hot — attacks on Catholicism, by antagonists ranging from Muslims, Hindus, and satanists, to BLM-type protesters (who attacked a group praying the Rosary)?

One fellow from Black Lives Matter used a canned foghorn to disrupt a group of Catholics praying the Rosary at the statue of the canonized King Louis in the city named after him (also Saturday) — a statue B.L.M. wants removed for dubious reasons.

Beyond foghorns, at least one man used his fists. 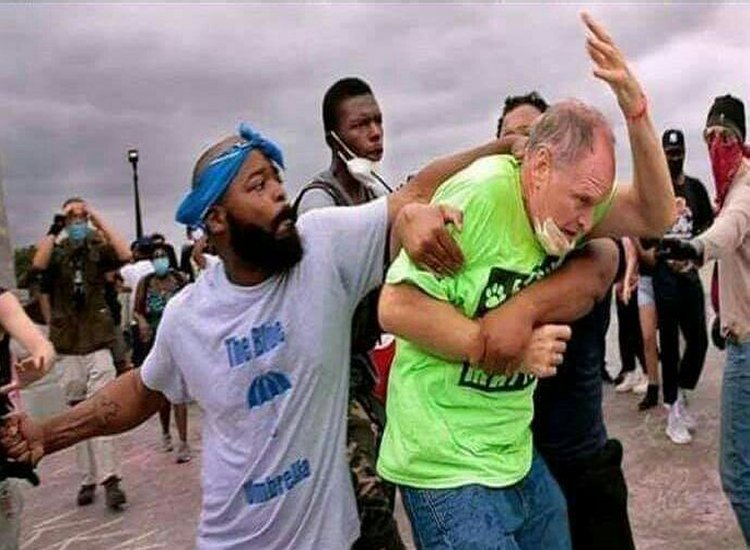 In Fargo, North Dakota, a trumpet-wielding man attacked a monsignor and two parishioners while others waited for an afternoon Sunday Mass to begin July 5 at the downtown St. Mary’s Cathedral. The Virgin again!

What conceivably does the Virgin, who at Guadalupe, Kibeho in Rwanda, and elsewhere appeared dark of skin, have to do with racial discrimination? Has she not been the Mother of All, imploring everyone to get along and to present bias toward no one?

Historically, what group has fought more for equal rights than the Catholic Church?

The Church is under attack. Soon, it will be an attack on all Christianity.

Twenty-six Catholic schools closed in the Archdiocese of New York.

A massive former-cathedral, Hagia Sofia, in Turkey, turned into a mosque.

To make matters worse, there are conflicts within the Church, with Catholic bloggers attacking fellow Catholics with a “bullhorn” (and cudgel) called the internet. 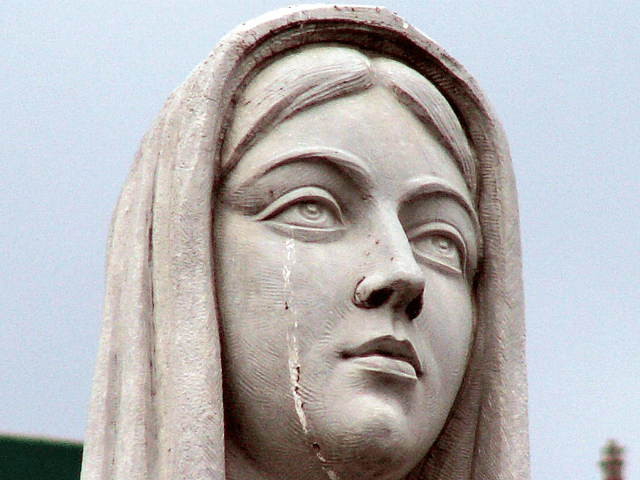 [Prophetic footnotes: It is all perhaps just part of the overall invasion of evil spirits as the world and especially the United States struggle with a health crisis that may soon go beyond a “warning” into the realm of chastisement. The U.S., once the most advanced in virtually every aspect of modern life, including medicine and public health, has more than a quarter of all the global coronavirus cases, along with most of the protests and assorted other rancor.

[Catholic churches are not the sole targets. During protests just a bit more than a month ago, a fire was set in the Episcopalian church near the White House. But try being a Catholic priest in India or Nigeria. (Headline: Gunmen attack Catholic priest, mourners in Kaduna.)

[Let’s note, as mentioned before, that just before the apparitions began in Kibeho, Rwanda — prophetic ones that have full Church approbation — there was a nationwide outbreak of vandalism at Catholic churches, specifically targeting Mary.

[Wrote Father Gabriel Maindron, author of a book about the apparitions, “Between 1980 and 1981 nearly all statues of the Virgin at the entrance to the parish churches were mutilated, destroyed, or stolen. In some cases this happened a number of times, when the statue had been restored or replaced. Even though some vandals were caught, it was not possible to clarify the situation. Only one thing is certain: they were paid large amounts. By whom? Why? Why be against someone in whom you pretend not to believe? Should we see in this the signature of the ‘adversary,’ Satan?”

[The desecrations occurred immediately before Mary began appearing in 1981 to Catholic schoolchildren in this impoverished, remote outback, apparitions during which, among other things, the Virgin announced major coming cataclysms, including a genocide that occurred in that very nation. The other events, she said, would one day affect the whole world — thus not necessarily immediate, to that time-frame (the 1980s), but in the “near” future, which may be the present time.

[Have no fear. Move forward in prayer. Never back down in the face of persecution — from whatever front and whatever irrational justification.]