Why is it that so few mention our “secret weapon” in the fight against Islamic terror?

Archbishop Fulton Sheen did so, as pointed out on these pages many years ago: the secret weapon of Mary, who is honored by both Catholics and Muslims — in the New Testament as well as the Koran. The hamlet of Fatima was named, indirectly, after a daughter of Mohammed!

She comes into stark relief — does the great mother and peacemaker — when one glimpses the magnificent Shrine of Our Lady of Lebanon in that Middle Eastern nation.

For as Asia News said last week, her towering statue “dominates the entire coastline of the country from the summit of Harissa,” the shrine a “destination of many pilgrimages by Christians, but also by Muslims, who honor the Virgin Mary. The shrine is highlighted by a huge, 15-ton bronze statue that’s nearly thirty-feet tall and  more than  a century old, the Virgin Mary stretching her hands towards Beirut.

“Muslim women visit the shrine, light candles, and offer flowers and money especially to ask for the grace of having a child,” it says.

What a point of unity — something we too infrequently seek everywhere in this divided world.

The Blessed Virgin’s special link with Lebanon may go back, if legend holds forth, to her time on earth, when tradition says she visited Lebanon with Jesus. There is a sanctuary in southern Lebanon dedicated to the Virgin of Mantara, marking a spot where Mary supposedly stayed, waiting for Jesus when He went to Tyre and Sidon. 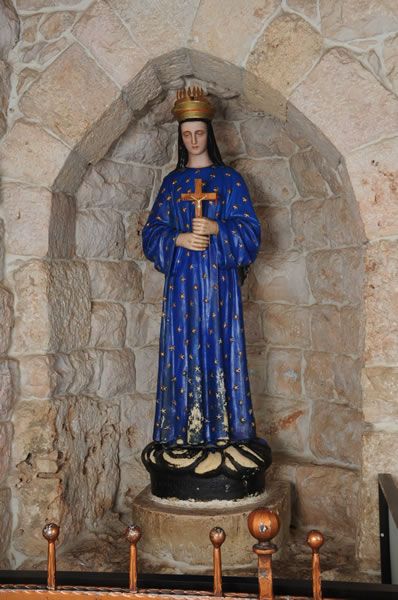 There are a number of statues and locales where Mary is honored in this nation. As a website put it, “Over a hundred years ago in the little town of Bechwat, Bekaa, Lebanon [inland and east of Harissa] a statue of the Virgin Mary of Hope became famous for many miracle cures by her intercession. The statue shows Mary wearing a blue dress with stars all over, an expression of Queen of Heaven [as at Pontmain]. She is holding a Cross in her hands and has a crown of gold on her head. The small church sits on the side of a mountain in a remote area above the fertile valley. On the side of this mountain grows fruit trees of every kind. The church is only twenty-feet long and twenty-feet wide and the statue sets on the left side of the altar.”

One day, a few years back, in 2004, it is alleged, a Muslim couple of Jordanian descent journeyed with her nine-year-old son, Muhammad al-Hawadi, to pray before Our Lady of Bechwat and the boy burst forth in excitement, declaring, to his mother, and anyone within earshot, that the statue had moved and was directly looking at him, her attire fluttering lightly. She blessed him with the Sign of the Cross.

When his skeptical parents glanced up, they witnessed the statue move its hand, her rosary beads shifting, her lungs seeming to draw breath, and her lips moving, as if speaking to them.

Many heard the account and flocking there, claimed to witness the same phenomenon. In some instances, the statue has exuded an ambrosial oil.

When a handicapped man went inside, he was instantly cured of what had crippled him.

As news spread, thousands more arrived. They still do. At times, the small mountain roads leading to the shrine could hardly accommodate them but were then paved — and

thousands continue to journey there — and continue, allegedly, to see her move. Healings continue to be reported at what has been called the Lourdes of the Middle East.

As far as the shrine at Harissa — the main Marian one in Lebanon — every year, two million now arrive! A basilica stands there, topped with the statue. Pilgrims snap photographs that in some cases they deem as miraculous (or at least, very intriguing shadows and reflections, from the statue, of light).

The sanctuary, according to Father Khalil Alwan, vice-rector, “is a meeting place between East and West.”

In 2016, the Maronite Patriarch Beshara Rai consecrated Lebanon and the Middle East to the Immaculate Heart of Mary with a solemn Mass in Harissa, as that nation shines as a steady light in a region — and world — too often cloaked with darkness.