There is much in the pipeline.

Let’s look at the medical stuff, since corona is surging again.

Sometimes, it is mayhem.

There is the vaccine — big news this week.

From what we can tell — thank God — the company generating it has not used cell lines from aborted fetuses, as some who are trying to formulate it have.

That’s Pfizer/BioNTech and its alleged breakthrough is known as a “RNA” vaccination, meaning its genetic structure has been modified. According to the Charlotte Lozier Institute, the final product does not include anything derived in such a hideous fashion, although the testing of it is marked with symbols indicating that some confirmatory experiments did use aborted-fetus cell-lines; some did not.

We must keep in mind that no vaccine, even those with such cell lines in the final product, are directly from an unborn child. But they were derived — often years or decades ago — from that dastardly source, and so, in our view, are immoral (here we differ with the Vatican, which long has allowed such vaccines as for the greater good; we certainly respect that opinion).

It’s up to your discernment.

It is certainly “pro-life” to save lives from covid-19. But somehow that may not quite satisfy the conscience. Up to you.

At this stage, we still need more information on what is being touted as the game-changing vaccine. Is it indeed free of cell lines from aborted fetuses, no matter how far in the past?

So far, so good. But: besides cell lines, we’d like to know more about the ingredients, especially what they call adjuvants — compounds or metals inserted as preservatives or to enhance the effects.

During the years, in some vaccines (for such things as measles), mercury, by way of what they label thimerosol, has been deployed, and there is evidence that the mercury has had deleterious effects (perhaps even causing all the autism we see in youngsters). Our amateur advice: Space out vaccinations. Be careful about loading too much on babies especially, no matter what they tell you. Excuse this pretension.).

Pray always before you do anything, especially at a hospital or doctor’s office.

One of the investors in Pfizer-BioNTech is Bill Gates. According to one antagonist, Dean W. Arnold, “Gates champions the ‘magic of vaccines’ and calls vaccines ‘something I love.’ In my recent book, I document the Gates Foundation’s targeted efforts to depopulate Ethiopia and Africa. The book also verifies accusations by Kenya’s Catholic doctors association, the nation’s largest, of three million women there unknowingly receiving vaccinations from the Gates-funded World Health Organization that were secretly laced with a sterilant and contraceptive. The WHO denied it, but in 2017, the former prime minister of Kenya, Raila Odinga backed the doctors: ‘Today, we can confirm to the country that the Catholic Church was right.’ Do I think Bill and Melinda are conspiring in back rooms to depopulate only darker races? I doubt it. Somebody is probably doing that, but my guess is that Bill and Melinda are admirable proponents of an ideology that believes they are helping the world.”

Is covid-19 really such a big deal?

The other day, while at a doctor’s office, the question was posed by another patient who was aggravated by the precautionary measures there (masks, waiting outside, social distancing in general). How long, he wanted to know, was this going to go on? And by the way, he wondered: did we know anyone with it?

It turned out that the answer was yes: a Eucharistic minister from church who died suddenly from a strange respiratory illness upon traveling to Germany seemed suspicious; another woman from church nearly succumbed to it three months back (she was formally diagnosed); a sibling of ours knows two people who had it (one mild, the other coughing since May); our son in Manhattan had covid last March and was pretty sick for four days or so but did well (like a bout of the flu, though he spread it to a coworker who spread it to her family and it was fairly bad); a woman who belongs to a ministry at our church nearly died from it; yesterday a long-time viewer wrote (so sadly) to say her husband just succumbed to it; another friend from church recently fought it off but was nearly hospitalized: He described not just trouble breathing but strange fibers coming from the skin on his chest.

Although rashes and papules are fairly common with covid, and there has been reported skin sensitivity (cutaneous hyperesthesia), we couldn’t find any other such cases — of fibers — on the internet. If true, it is galvanizing because such “fibers” also have been reported far more famously with what they call Morgellons Disease (in some cases, unexplained, multi-colored fibers).

Might the coronavirus and the mysterious Morgellons be from something unleashed accidentally by labs?

Or — when such a matter is inconvenient — is it just “fake news”?

We keep going back to the coronavirus and the strange effects.

[Footnote: A new Covid-19 variant – called Cluster 5 – has caused widespread alarm, says a newspaper report, “because it has the potential to render vaccines less effective if it spreads through populations. Danish officials are trying to stomp it out before its unleashed on the general public, though, so far, it is only known to have infected 13 people in northern Denmark. Shocking photos showed diggers and construction lorries offloading thousands of dead mink into ditches this morning, with workers in hazmat suits spraying down the vehicles with disinfectant. The Danish environmental and health authorities announced the animals were being buried in mass graves on military land near the northwestern town of Holstebro because there are not enough incinerators. Scientists believe the virus jumped from fur farmworkers to mink in the summer before being passed back to humans. As it crossed between species, a mutation occurred on its ‘spike’ protein, which it uses to enter human cells. It’s significant because the leading vaccine candidates – including Pfizer’s jab, which was yesterday revealed to be 90 percent effective – work by targeting this protein.] 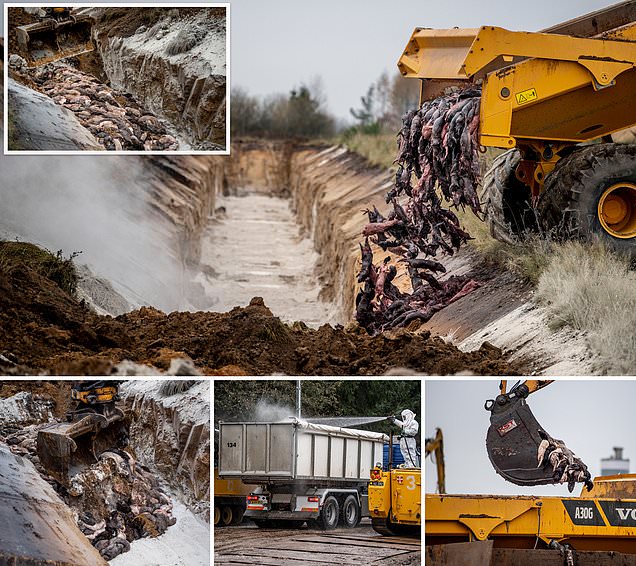