It’s puzzling: how the Pope who recognized the infiltration of evil — who warned that the “smoke of Satan” was entering through a “fissure” in the Church — at the same time discontinued the St. Michael Prayer at the end of Mass. In 1964, in the first wave of post-Vatican II changes — in what was known as the Instructio Prima — the magnificent and potent invocation to the archangel who threw Lucifer from Heaven (“St. Michael the Archangel, defend us in the battle…”) was removed from low Mass in the Catholic Church along with a reading of a last Gospel. This Pope, who had many fine attributes, and was well-loved, also however made the feast day of September 29, once solely that archangel’s alone, the day too for Raphael and Gabriel (seemingly and one must assume unintentionally diluting it). Much more significantly, in 1972 this Pontiff — Paul VI — eliminated the minor order of “exorcist” in his apostolic letter Ministeria Quaedam.

“Prior to 1972, every man preparing for the priesthood received the minor order of exorcist,” notes exorcist Father Vincent Lampert of Indianapolis in a truly valuable new book called Exorcism: The Battle Against Satan and His Demons. “It was viewed as one of the steps toward ordination.”

“But after 1972, the conference of bishops for whatever region of the world had to request the Apostolic See to establish exorcist as a ministry in their area if they deemed it useful.”

The result of these actions was devastating. The Church, it seemed, had surrendered to academia, scientism, and modernism, opening not just fissures but canyons; among other things, clergy abuse skyrocketed around this time.

He was a good Pope, Paul VI, but was there a major blind spot? How could bishops not deem an exorcist necessary?

“I was appointed to be the exorcist for the Archdiocese of Indianapolis back in 2005,” explains Father Lampert. “At the time, I became one of about a dozen officially appointed exorcists in the United States. Today that number has grown to around 125. The exact number is unknown as some exorcists are named publicly whereas others choose to remain anonymous.”

Even if the number is closer to two hundred, that means just one exorcist per 365,000 U.S. Catholics — falling far short of what Jesus requested in Matthew 16:17, when He instructed all His disciples to cast out evil, as He did so often and at every turn. “And these signs will accompany those who have believed: in My name they will cast out demons, they will speak with new tongues,” He said.

How can we ignore that?

Saint John Paul II later began to turn that ship around, famously performing an exorcism, and Pope Francis has brought deliverance roaring back, 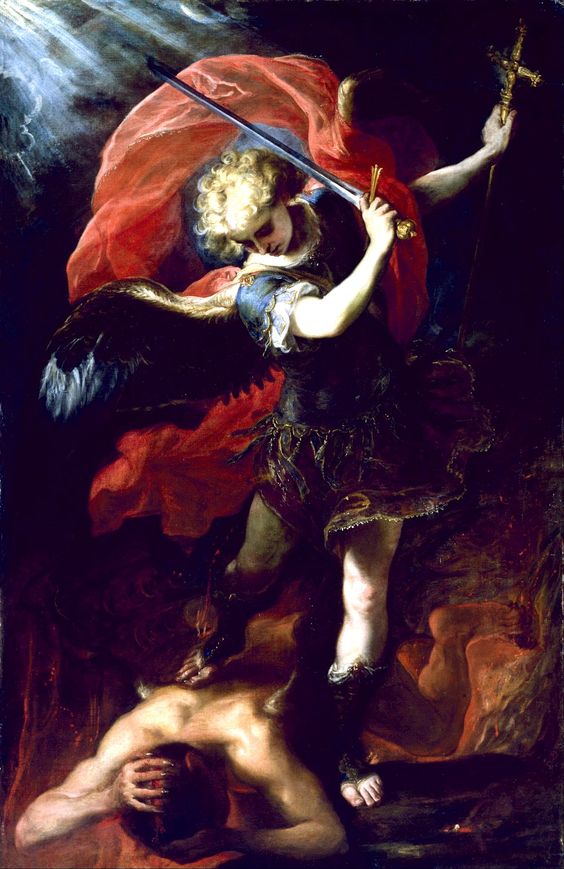 requesting every diocese to have at least one exorcist and promoting the annual seminar for potential exorcists. (Most recently he has requested Catholics to recite a Rosary and the Prayer to the Archangel Michael every day this month of October.)

But this is a book that goes far beyond Church matters to insights into personal deliverance. Father Lampert explains how and why another vastly underutilized tool of the Church — the sacrament of Confession — is an actual means of expelling evil spirits, one likewise set on a back burner.

“The role of the local priest in being well-formed about how to help people in their fight against evil is essential, because it is in the local parish where people experience the sacramental life of the Church,” he says. “And when it comes to sacraments and defeating the devil, the number one weapon in our arsenal is the Sacrament of Penance.

“The importance of going to Confession cannot be overstated. When we confess our sins, we place them in the hands of God, and once we have given them over to God, the devil may no longer use them against us.”

Yet in our modern-day Confession is infrequent and sporadic even among those who regularly attend Mass. In some parishes, confessionals have been transmogrified into broom closets and Confession times are in a narrow window of time — half an hour or less — before one of the Sunday liturgies, instead of a slot dedicated solely for this sacrament. (Remember Confession on Saturday afternoons?)

So it is that we have been left naked before the rising tyrant known as Satan.

Meanwhile, while we often point solely to abortion and sexual immorality as the cause of evil in America and elsewhere around the world, it goes much beyond that, says Father Lampert. Fascinating is the exorcist’s observation that individualism — so rampant now in the U.S. — is at the root of much evil.

“This viewpoint leaves no room for the One True God, and the result is a greater presence of evil both in the world and in the lives of individuals. To put it another way, the triumph of the devil is individualism, whereby the human person eliminates God from the picture and no longer accepts any external principles. Freedom does not mean that we can do whatever we want to do.

“When we live in the manner that God has created us to live, being obedient to his commands, that is freedom in the true sense of the word.”

[resources: Exorcism: The Battle Against Satan and His Demons  and Michael Brown online retreat video]

[Footnote: In his new encyclical, Pope Francis concurs. In social networks, he criticizes technologies that “shamelessly peer into every detail” of people’s lives, and “do not really build community; instead, they tend to disguise and expand the very individualism that finds expression in xenophobia and in contempt for the vulnerable. Things that until a few years ago could not be said by anyone without risking the loss of universal respect can now be said with impunity,” he said, “and in the crudest of terms, even by some political figures.”]

[Further footnote: The anonymity some exorcists request is not just to keep curiosity-seekers at bay but to prevent priests from being personally “cursed” by witches and satanists.]