Is there an “asteroid X”? An unknown cosmic marauder? An itinerant chunk of space rock in our solar system larger than previously conceived?

The obvious answer: of course — thousands of them!

Years back, when we interviewed the head of comet research at NASA’s Jet Propulsion Laboratory in Pasadena, Dr. Clark R. Chapman, and asked him for a number, his “guesstimate” was sixty-five million comets and asteroids in our solar system (including the regions just beyond Pluto). He also admitted, when questioned further, that this number was a “sheer guess.”

But what about one that’s not only undiscovered but truly gargantuan?

Many speculate that lurking out there, perhaps in one of two major comet-asteroid “clouds,” is “Planet X,” a theoretical object bigger than Pluto. There’s no strong evidence for the existence of such a planet or planetoid — not at the current time — but what about a smaller but also deadly “Asteroid X”? Here we have more data. For just last week, astronomers said a study of meteorites that have hit earth suggests that at least one of them in Sudan known as AhS 202 broke off from just such a giant asteroid — “one more or less the size of the dwarf planet Ceres, the largest object in the asteroid belt,” says Livescience.

According to a paper in Nature Astronomy, “The infrared spectra of minerals in mixtures (for example, meteorites) add linearly in proportion to their abundance; as such, we have computed the average spectrum for AhS 202 from the spectral map acquired on the sample. These pressure estimates allow us to constrain the size of the AhS 202 parent asteroid.” 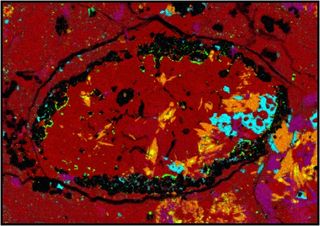 Ceres is the largest object in an asteroid belt between Mars and Jupiter, and the only dwarf planet located in the inner solar system. It was the first member of the asteroid belt to be discovered when Giuseppe Piazzi spotted it in 1801. In 2015, Ceres became the first dwarf planet to receive a visit from a spacecraft. “Called an asteroid for many years, Ceres is so much bigger and so different from its rocky neighbors that scientists classified it as a dwarf planet in 2006,” explains NASA.

Even though huge, Ceres is still 14 times smaller than Pluto — so we’re talking about an asteroid, not a planet.

But that’s still plenty large, and would easily destroy life on earth if it ever directly hit.

How many others of similar size might there be? And could there be ones larger?

With a radius of 715 miles, Pluto is about a sixth the width of earth. If earth was the size of a nickel, NASA says, “Pluto would be about as big as a popcorn kernel.”

One fourteen times smaller, which mean Ceres-size, would be fifty-one miles in radius.

All it would take is an asteroid a mere one mile in width to toss up enough dust to shut down photosynthesis (and thus all agricultural) on our planet for a year if not longer — never mind what would happen if it hit a populated area or the ocean, where, moving at more than eight times the speed of a bullet, it would blast a crater at the bottom of the sea and cause a tremendous, miles high tsunami.

Anything over half-a-mile wide could cause global effects.

If it hit dead center, one the size of a garage could take out a city.

Not the kind of imagining that puts one to sleep.

But have heart: we are not in the random, chaotic universe that astronomers have us believe.

God oversees it all, and it is God Who keeps everything in its place.