Where better to gain wisdom than the “Books of Wisdom” in Scripture?

One, as mentioned previously, is the Book of Sirach.

Along with wisdom (of which there’s much), is there prophecy? 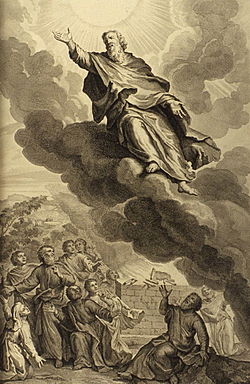 bandoned the Law of the Most High,” says Sirach (49:4-5), “so he gave their power to others, their glory to a foolish nation, who burned the holy city.” Along with other nations and empires in the past, this could speak to the U.S. (and if so: is it a warning for Israel?).

While that Enoch was apparently the son of Cain (and according to Sirach, was “taken up bodily” — assumed — into Heaven), there was also a prophet-mystic named Enoch ascribed by tradition to have been the great-grandfather of Noah. His visions are contained in ancient Hebrew apocalyptic text called the “Book of Enoch.”

It’s a non-canonical text — not part of the official Bible (except in the Ethiopian Orthodox and Eritrean Orthodox Tewahedo Churches) — but fragments of it were found in the Dead Sea scrolls, and early Church fathers considered it of historical and theological interest.

Many wonder many things. Was Enoch (the book) rejected for its seemingly outlandish claims? Is this the Enoch (the man) mentioned in the very lineage of Jesus? Did the book predict Christ (the reason, it is said, that Jews reject it)?

Some believe Enoch will return with Elijah in the end of times.

Filling in details hinted at in Genesis, the Book of Enoch claims to know much about the infamous Nephilim — how angels had lusted after the beautiful human women on the earth “and said to one another: ‘Come, let us choose for us wives among the children of men and beget us children.” Two hundred of them then descended, says Enoch, to commit the “great sin,” and the offspring were (as Genesis too mentions) the legendary “giants” of old.

“[The sinning angels] took unto themselves wives, and each chose for himself one, and they began to go in unto them and to defile themselves with them, and they taught them charms and enchantments, and the cutting of roots, and made them acquainted with plants,” it says in Chapter Seven [our italics]. (The root of occultism?)

“And they became pregnant, and they bare great giants, whose height was three thousand ells: who consumed all the acquisitions of men. And when men could no longer sustain them, the giants turned against then and devoured mankind.”

Blood was shed. Lawlessness was wrought. “And now,” says Enoch, “the giants, who are produced from the spirits and flesh, shall be called evil spirits upon the earth, and on the earth shall be their dwelling.

“Evil spirits have proceeded from their bodies, because they are born from men and from the holy Watchers is their beginning and primal origin. They shall be evil spirits on earth, and evil spirits shall they be called.”

As that introduction to his works sums it up, Enoch traveled to different places in the heavens and saw the fallen angels plunging to earth. That (both Enoch and the Book of Genesis tell us) led to a chastisement: the Deluge of Noah’s time, which some believe occurred 5,000 to 7,000 years ago. Others argue it was longer ago, still others that it was more recent.

Enoch actually saw two judgments, one a thousand years after the other, causing the reader to wonder if such events tend to occur, in less drastic ways than the Flood, periodically. At various times in the past, entire regional populations and even civilizations relocated or vanished roughly every millenium in some part of the world (see Sent To Earth).

The name “Enoch” (whether grand-dad of Noah or son of Cain) is mentioned by our count a dozen times in the Old and New Testaments. The New Testament makes three references to him — one as an ancestor of Jesus (Luke 3:37) and another in Hebrew 11:5, where it says, “By faith Enoch was translated that he should not see death; and was not found, because God had translated him.” The Epistle of Jude refers to him (in one Bible version) as “Enoch, the Seventh from Adam.” What problems that apple in the Garden wrought!

In ten thousand years, it was said — by some prophecy buffs who studied the text — a chastisement like the Flood would recur. So the key question: how many years ago did Enoch actually live? Meanwhile, there are those 1,000-year periods to mull over, which conclude, many believe, with a thousand-year reign of the Messiah.