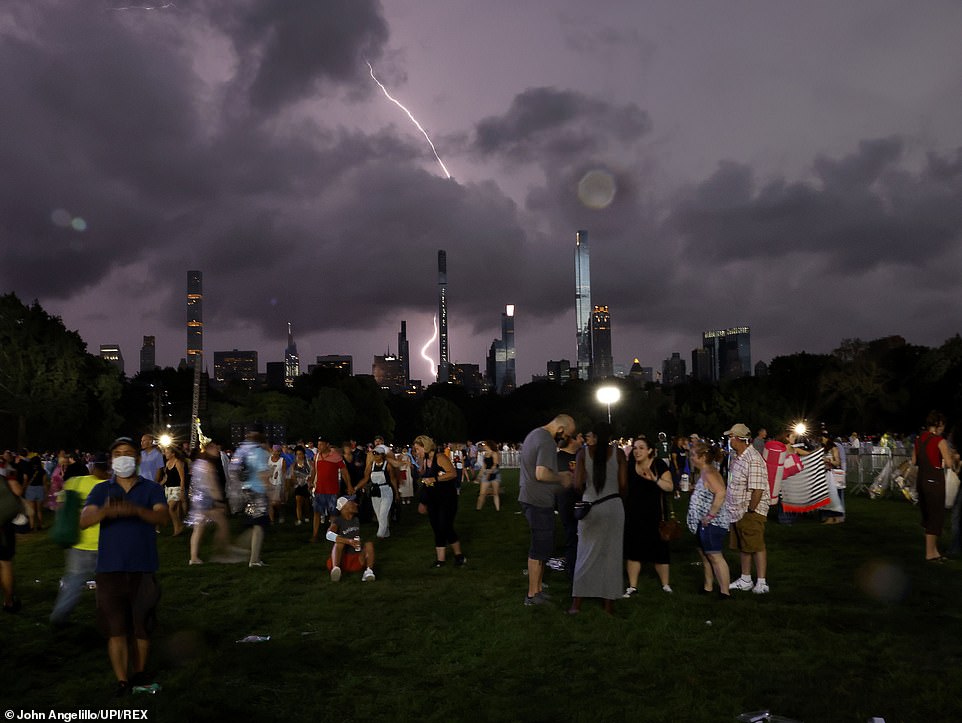 It doesn’t get more blatant than this:

Saturday evening, a massive concert was held in New York’s Central Park, celebrating the “end” of the pandemic and life right back, in the nation’s largest metropolis, to where it had been.

Not quite: for in the middle of it, outbursts of lightning from the approaching storm “Henri” caused it to be halted. There was no immediate return to the prelapsarian.

The concert was called “We Love NYC: The Homecoming.” Among the musicians was a well-known group from the Seventies called “Earth, Wind, and Fire” (at this time when massive blazes scorch the opposite coast, and water dries up along the Colorado).

Curious indeed. Blatant. There’s so much more to say, about this moment in history. Join us on September 11 (2021) for our online retreat.

After 9/11/01, we tried to do same thing — immediately defy and celebrate. New Yorkers were told to “show” the terrorists by going out and shopping.

Not so fast: note that a war in Afghanistan caused by similar hubris in the wake of 9/11 is now, twenty years later, another disaster.

Deny not and defy not chastisement. Rather, search the inward-most parts. Purify all. In times of joy and trauma both, give God glory. Practice the Mass reading today: “We give thanks to God always for all of you, remembering you in our prayers, unceasingly calling to mind your work of faith and labor of love and endurance in hope of our Lord Jesus Christ, before our God and Father, knowing, brothers and sisters loved by God, how you were chosen” (1 Thessalonians 1). Rejoice always, pray without ceasing, give thanks in all circumstances; for this is the will of God in Christ Jesus for you.

“Do not quench the  Spirit. Do not despise prophecies, but test everything; hold fast what is good.  Abstain from every form of evil.”

A very curious item from Down Under, where during a news broadcast, a clip of a Black Mass — with the “priest” saying “Hail Satan” — suddenly showed up, if briefly. As Newsweek commented: “Television viewers in Australia were given a devilish surprise this week after a news broadcast suddenly cut to footage from a satanic ritual. The incident occurred during a segment on Australian Broadcasting Corporation’s (ABC) nightly news bulletin detailing the introduction of a new law that could see criminals handed prison sentences for hurting police animals. Just as the segment was about to end, the feed suddenly cut to a brief clip featuring three individuals on a stage alongside an illuminated upside-down crucifix.”

Added the magazine: “ABC TV has so far failed to provide an explanation as to what happened.” This is Queensland.

However it got there, would you join us in now saying altogether, if we view it, “THE LORD REBUKE YOU SATAN, IN THE NAME OF JESUS.”

ABC's satanic slip-up. What was going on here? @abcnews pic.twitter.com/D1dWfjOYhM

Let’s say it again: “IN THE NAME OF JESUS, GET THEE HENCE, SATAN.”

Curious it is that, in putting together comparisons between what we’re going through now, with covid, and previous pandemics, all we seem to hear about is the great influenza that started in 1918 — and was even more catastrophic. (No questioning that.) Or, we see comparisons to HIV, and polio, or smallpox, or the various bird and swine influenzas that now fit into the backdrop — still there but not nearly as virulent.

Most recently, it was pointed out that the 1918-1920 pandemic, which killed two Fatima seers (and fifty to a hundred million others), came in four waves, with the last one more deadly in some parts than the original.

Is this what will happen with covid?

Is it at all related to the “1990 prophecy” which warned in part that science had “filled the air with the power of the enemy.”

We’ve gone over some of this before — whether the coronavirus will evolve into stronger variants; decline in potency with future mutations (the most likely scenario — they initially thought); fall into the background as HIV has, due to better treatments and immunity; or a combination. In other words: always around — like common cold rhinoviruses, — but not domineering.

“If the virus grows too transmissible or too virulent, “it’ll burn itself out,'” says Nash Rochman, who studies computational genomics at the National Institutes of Health. In other words, notes the article, “if the coronavirus killed everyone it infected (or if it infected every human on the planet and our immune systems got better at fighting it), it would run out of new hosts to infect. ‘Can you have a virus that is really, really infectious, and really, really deadly?’ Rochman asks. ‘The answer is probably not.’ So some good news: Covid-19 can’t get worse and worse indefinitely.”

Or at least this is what experts currently believe.

We can draw some comfort from that, but the curiosity here is how few go back for comparisons to the plagues of ancient Rome, or the great Medieval scourge of the Black Death (bubonic fever), which, amazingly enough, occurred also in a period during which the climate was abruptly changing.

Bubonic fever continued to haunt Europe not for years, or even decades, but several centuries. 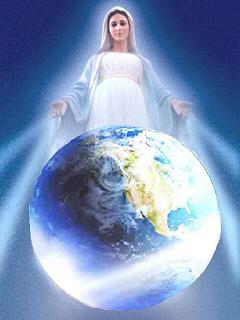 And more curious still, it was often stopped, according to devotional literature, by the Blessed Mother — who time and again — in Spain, France, Germany, Portugal, Italy, and other nations — manifested to cowherds or other villagers in various hamlets and towns, promising to protect them if they built a shrine commemorating her at the site of apparition or miracle (in many cases, a wondrous icon mysterious left there, or weeping).

Wave after wave, epidemiological brushfires, with a diabolical underside, were halted through her and the Infant’s intercession.

In Montañana la Yerma was an apparition promising that a likeness of Mary as she appeared there would “ward off pestilence and all disease.” That too was back in the fourteenth century. She was invoked, was the great Madonna, at Lyon during a bubonic outbreak in 1643. “Instantly,” noted a chronicler, “all trace of pestilence vanished.”

Recall this article from last December on how the same occurred with the Infant of Prague. It’s hard to overemphasize how many dozens if not hundreds of times Mary intervened for a village or region. (See The Last Secret.)

In 1880 the mystic Marie-Julie Jahenny, commenting on epidemics, said, “The Lord gives to the great St. Benedict the power to alleviate the great calamity. A respectful procession of the statute, made without any fear or dread, may arrest this calamity.”

It’s too bad (and curious) our Church — from the North American bishops to the Vatican — does not bring out this intercession, instead of the way it is now: a perspective built almost solely on science instead also of the supernatural. We are the Mystical Body.

True it is that medical advice is critical. True it also is that some of those who have ignored it and gone solely with the mystical have had problems, some even dying, or gasping in hospitals. God gives different gifts to various people, and doctors and scientists are people. They too can be informed spiritually (even if they don’t realize it).

[As for us rank-and-file: we too can be “curiosities,” in these convoluted topsy-turvey, confused, and almost hysterical times. Although we long have expected signs and chastisements, somehow too many of us (not to mention the entire secular world) are not seeing the current pandemic as precisely that. What more might we want — total annihilation, as almost occurred in the 1300s? Also, curiously, how many who otherwise believe there are signs and omens in the climate and weather, and that they can come too as chastisements, deny that climate is changing (as it did during the bubonic plagues).

[The same Virgin who protected villages against the recurring if isolated outbreaks of the Black Death (which spanned at least from the mid-1300s to the 1600s) also frequently intervened to save people, livestock, and crops from droughts and other severe weather. This is repeating itself, and should not be denied.]

[resources: Sent To Earth and The Last Secret]