It rains on the good and the evil, Scripture tells us (Matthew 5:45), and so now, with coronavirus, if not an actual “plague” — at least not like the incredible medieval bubonic outbreaks — we have a startling example of how quickly something can come like a shot across the bow and even though short of a total downfall, quickly — instantly — melt down so many things we hold dear.

Remember that shots across the bow can eventually strike the hull of a ship.

That’s 1/20,000th of those who died during the influenza outbreak a century ago (a pandemic that claimed two of the three seers from Fatima and fifty to a hundred million).

Let those figures sink in. You want digital? You can see the coronavirus tally updated by the minute here.

At LaSalette, Our Lady, warning, in 1846, of a great famine and epidemic, said: “There will be a kind of false peace in the world. People will think of nothing but amusement.” That was followed by sickness caused by the European potato famine. Thus, epidemic has figured in some way into LaSalette, Fatima, and even Guadalupe (where Juan Diego’s uncle was dying from fever, until healed by the Virgin).

How quickly everything “of this world,” everything cyber, everything that seemed so inviolate and invincible — that appeared to be on an irrevocable upswing — is dwindling like the last of winter snow on asphalt (and perhaps even headed  — after a few propping-ups by government — for a complete meltdown; almost across the board).

Those reprieves will come in the way of financial infusions — funds the government doesn’t remotely have but manufactures out of thin air. It is another form of epidemic. How long can the United States function with a debt of more than $23 trillion, one that increases, like plague numbers, by the nanosecond (see here)?

Have you not noted how the main gauge of this crisis has been the stock market (as opposed to individual human suffering)? We don’t know all the symptoms because we’re focused on numbers.

It is the Era of Falsity. There are mirages all around you, from Facebook and City Hall to Washington.

They’ll crack, and then splinter, or vaporize — those mirages — like the funhouse mirrors (smoke and mirrors) they are.

Oh, America! Are you in meltdown, or still just being forewarned? Perhaps already there is no more United States (instead, a conglomeration of peoples from many places and walks of life united only by the dollar bill).

“In God We Trust” — and the Cross — have been replaced, one can say, by a twisted serpentine one (the $ sign).

And so — thank God — we see the glimmerings (if only the glimmerings, for it would surprise no one if the Dow “fights back”) of a new “poorer” reality. A dress rehearsal. It is no coincidence, that this coincides with Lent. Don the ashes and sackcloth!

Eventually, the Dow will not be able to fight back. It will swing at windmills. 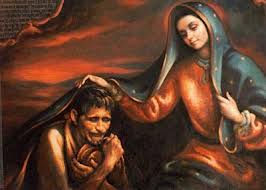 Answer that with another question: did we learn anything permanent from 9/11 — during which the Mayor of New York urged people to respond to the terrorists by going out and shopping? Did the name of those two buildings — the World Trade Center — not hint at just such materialism?

That, unfortunately, and fortunately (for purification is good), is yet to come.

[Footnote: the best defense is prayer, of course, but also bolstering the immune system, which is greatly helped by lessening stress, getting enough sleep, exercising, eating well, and taking vitamins C and D: see here]