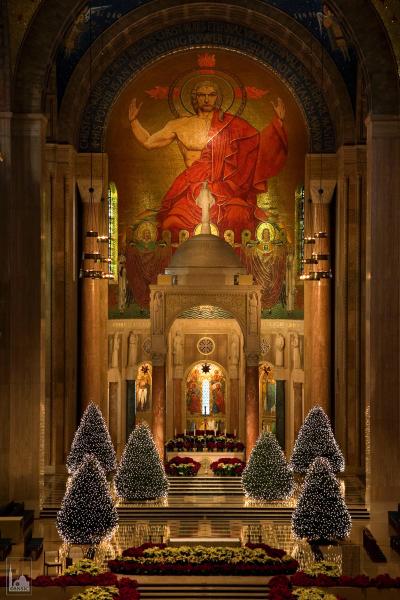 Let’s get right to the point.

You need to take some urgent action as far as your — our — “flagship” church: the Basilica of the National Shrine of the Immaculate Conception in Washington.

That church, so august and potentially holy, so deserving of better treatment, needs three things immediately, all of which, by virtue not just of your positions, but as Catholics, deserve your attention and discernment.

One is to exorcise the place.

That’s right: the key church in the United States needs a solemn ritual of cleansing. Evil has resided there. This is not to judge men but what has at the least surrounded some of those who have played major roles at the basilica for decades now. The two who come to mind most readily: poor ex-cardinal Theodore McCarrick, who virtually everyone knows was not just dethroned but defrocked for abusing men (mainly seminarians!). Before all his scandals came to light, he reigned supreme there.

Then there is the rector. That’s Monsignor Walter Rossi, who reportedly had two condos in addition to an ornate main

home and is now under formal investigation by both the Scranton and D.C. dioceses for alleged homosexual predation. We know this cannot sit well with Your Excellencies — right?

Monsignor Rossi’s predecessor at the shrine?

That was the Most Reverend Michael Bransfield. He, as you know too well, had to leave the episcopate in  West Virginia, accused there of gross financial impropriety (including $1,000 a month for alcohol and $4.6 million for home renovations). Pope Francis has banned him from celebrating public Mass. 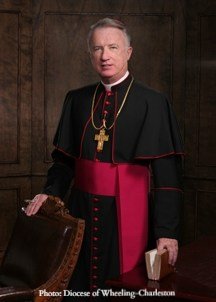 Bishop Bransfield brings us to the second point: the utter failure of the shrine rectors — and U.S. bishops — to pay any discernible heed to what in Ohio became know as the “Our Lady of America” messages.

In those messages — which had  full backing (and imprimatur) of a highly esteemed Cincinnati archbishop, Paul F. Leiboild — was the request that U.S. bishops conduct a solemn procession at the shrine and install a statue representing Mary under precisely the title of “Our Lady of America.” The shrine has a bevy of Marian grottos representing apparitions around the world, but not one representing the U.S. (last we checked)! When we contacted Bishop Bransfield nearly twenty years ago to ask about this, we were brushed off as perhaps superstitious. Curious it has been, in years since, to note how many of those who resist the Church’s mystical component were immersed in scandal. Peculiar indeed. The same has been true in Canada. The only living bishop in the U.S. to promote the apparition has been Archbishop Raymond Burke, at the time in St. Louis. You can see his letter to the bishops below.

The Our Lady of America apparitions went back to just before 1960 — and just before what can only be described as a homosexual invasion. Might this have been held in check had there been an orientation toward the Blessed Mother instead of modern theology and psychology?

Way back on September 27, 1956, the supposed apparition (we’ll still wait for Church rule on it) told Sister Neuzil (who a later bishop stripped of her habit), “Assuage the sorrow of my heart over the ingratitude of sinful men by the love and chasteness of your lives. Will you do this for me, beloved children, or will you allow your mother to weep in vain?

“I come to you, oh children of America, as a last resort. I plead with you to listen to my voice. Cleanse your souls in the Precious Blood of my Son. Be my army of chaste soldiers, ready to fight to the death to preserve the purity of your souls. I desire to make the whole of America my shrine by making every heart accessible to the love of my Son.”

“My child, I entrust you with this message that you must make known to my children in America. I wish it to be the country dedicated to my purity. The wonders I will work will be the wonders of the soul. They must have faith and believe firmly in my love for them. I desire that they be the children of my Pure Heart. I desire, through my children in America, to further the cause of faith and purity among peoples and nations. Let them come with confidence and simplicity, and I, their Mother, will teach them to become pure like to my Heart that their own hearts may be more pleasing to the Heart of my Son.”

If her requests were met, she allegedly promised to make the shrine a place of healing miracles comparable to Lourdes — requests that, decidedly — tragically, for untold thousands — were not met in even small measure.

“Our Lady often emphasized her desire that the Shrine be made a place of special pilgrimage,” said the seer, Sister Mary Neuzil, now deceased. “She wishes to be honored there as Our Lady of America, the Immaculate Virgin.”

In addition to the procession, penance, and statue, the Blessed Mother asked that a special medal be struck. Only if her requests for purity — by clergy and laity alike — would the U.S. be spared a brutal chastisement by way of war and fire, it was alleged.

“How they resist My grace!” lamented Mary, according to the nun, whose order was decimated by modernism — eventually forsaking their habits. “O My priests, My religious, what would I not do for you if you would only let Me! I come daily laden with graces, which you daily refuse.

“What am I to say, my best beloved? How long will you resist My love? It is from you I expect everything, and you give Me but the husks of your affections.

“My little white dove, it was this ingratitude on the part of My priests and My religious that caused Me so much sorrow in My passion.

“Oh, how they resist My grace! How they fight against My love!” [see full archived story].

Painful but good it is to watch the Church being purged of very serious — to be blunt, perverted and perverting, to use Pope VI’s words — sinners. Our poor young! No wonder the apparition dwelt on protecting the purity of the children.

Now we come to the last, third matter:

Dear bishops, in light of all that occurred at the basilica as well as across North America, reconsecrate the basilica. Give it a fresh spiritual start. It has been profaned.

These are not eccentric requests. If nothing else, cleanse America’s most important Catholic shrine. Superstition?

We’ll find that out on the other side; we’ll see that as truth in the Light of Heaven.

[Footnote: letter from Archbishop Burke to the bishops in 2007 on May 31, 2007 — Feast of the Visitation of the Blessed Virgin Mary.

To the Bishops of the United States Conference of Catholic Bishops:

Having reviewed the correspondence between Sister Mary Ephrem and her spiritual director of many years, Monsignor Paul F. Leibold, Vicar General of the Archdiocese of Cincinnati, who later became the Bishop of Evansville and, then, Archbishop of Cincinnati, it is clear that the devotion, as proposed by Sister Mary Ephrem, received his approbation. In addition to the correspondence by which Monsignor Leibold declared the approval of the devotion, he also carried out the first of Our Lady of America’s requests, made through Sister Mary Ephrem, namely, he had a medal struck with the image of Our Lady of America on one side and the coat of arms of the Christian family on the other.

The coat of arms symbolically represents the substance of the private revelation received by Sister Mary Ephrem, namely, the Indwelling of the Holy Trinity in the Christian home, which is the source of life and unity in the family. The coat of arms points to the purity and selflessness of love in the family, because of the Indwelling of the Holy Trinity, the model of which is the Mother of God, under her title of the Immaculate Conception, patroness of our nation. In a particular way, Our Lady of America expressed her desire that the United States of America, through her intercession, be devoted to the purity of love. She identified herself to Sister Mary Ephrem as “Our Lady of America, The Immaculate Virgin.” In the consecration of our nation to our Blessed Mother, made in 1959 at the National Shrine and renewed, in our name, by Bishop David Ricken on November 11, 2006, the Saturday before the November meeting of our Conference of Bishops, our Blessed Mother is addressed as “Immaculate Virgin.”

The contents of the private revelation received by Sister Mary Ephrem were published in a booklet, first in 1960, and, again, in 1971. Both of these editions were published with the Imprimatur of Archbishop Leibold. A final edition, with some new contents, was published in 1989. The new contents were added at the direction of Father Edmund Morman, S.V.D., the last chaplain of Our Lady of the Nativity Convent at New Riegel. Father Morman was sadly killed in an automobile accident on February 17, 1986.

As Archbishop of Cincinnati, Archbishop Leibold commissioned a wooden plaque with the image of Our Lady of America, which he gave to the cloister at New Riegel, at which it was displayed for many years in a public area. He had the wooden plaque created for the specific purpose of its use in processions at the New Riegel convent.

Archbishop Leibold also authorized the Weberding Woodcarving Shop at Batesville, Indiana, to carve a statue of Our Lady of America. The statue was carved for Our Lady of the Nativity Convent at New Riegel, Ohio, at which public devotions to Our Lady of America were regularly celebrated.

The prayer attached to the devotion also received the imprimatur of the then Monsignor Leibold, Vicar General of the Archdiocese of Cincinnati. Archbishop Leibold was Sister Mary Ephrem’s spiritual director from the time that he was Vicar General of the Archdiocese of Cincinnati until he died in1972. Archbishop Leibold was always clear that the approved devotion had its origin in private revelation received by Sister Mary Ephrem over many years.

What can be concluded canonically is that the devotion was both approved by Archbishop Leibold and, what is more, was actively promoted by him. In addition, over the years, other Bishops have approved the devotion and have participated in public devotion to the Mother of God, under the title of Our Lady of America.

Although the devotion to Our Lady of America has remained constant over the years, in recent years the devotion has spread very much and has been embraced by many with special fervor. Seemingly, as has been suggested by Father Peter Damian Mary Fehlner, F.I., in his homily of August 5, 2006, at the Shrine of the Most Blessed Sacrament in Hanceville, the moral crisis of our time, which demands a new teaching and living of the virtue of purity, has found an especially fitting response of loving care from the Mother of God in her message to Sister Mary Ephrem.

Some have raised with me the canonical question regarding the status of Our Lady of the Nativity Convent in Seneca County, Ohio, which has been the residence of any remaining member of the suppressed contemplative branch of the Congregation of Sisters of the Most Precious Blood of Jesus. In response, I observe that the canonical question has no bearing on the devotion or its approbation.

I hope that the above may be of some help to you in responding to questions regarding the devotion to Our Lady of America.

May the Immaculate Virgin intercede for the intentions of our dioceses and our nation. With fraternal gratitude and esteem, I remain

Yours devotedly in Christ,