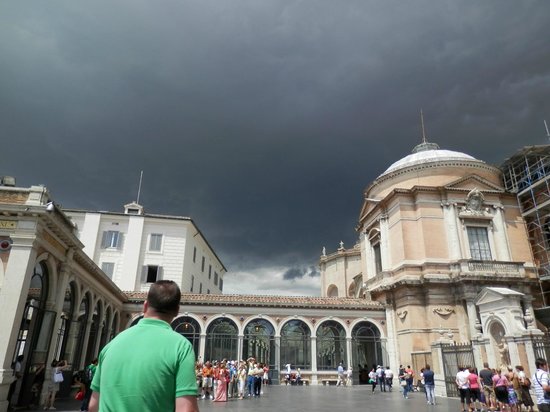 With all obedience and respect, a few questions: Couldn’t the Vatican have diminished if not prevented the “Pachamama” affair with a bit more research and preparation? Was it not obvious that, as the Amazonian statue was brought into the Vatican Garden, at the onset of the Synod, the Pope was uncomfortable when he spotted it (ditching his prepared remarks and instead opting to pray the Our Father — as in “deliver us from evil”)? Is it not noteworthy, to use understatement, that no one on the Vatican staff had anticipated this? Or was the greatest problem openness: tolerance, run amok? Has the Vatican become so liberal as to have run off the rails?

“What a shame the organizers of the Synod did not foresee the problems these cultural artifacts would cause so many Catholics around the world and make an effort to give an explanation like this,” one prominent U.S. priest, Father Dwight Longenecker, wrote us. “I’m not sure I buy this explanation 100% [that Pachamama is simply an indigenous way to connect with God], but it goes a long way towards explaining what, for Western Christians, is an alien and disturbing custom. I wish also that the Synod documents had incorporated reassuring language and explanations. Unfortunately they did not.” 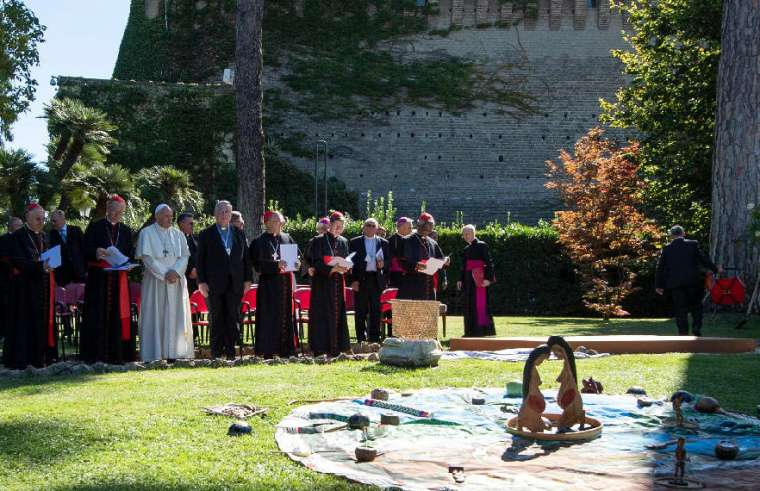 That there is a shortage of staff or experience in Rome was also obvious when, as one news outlet pointed out last week, the Vatican newspaper, L’Osservatore Romano, in recounting the November 5 elections in four U.S. states (headline: “Negative election test for Trump”), inaccurately reported that New Jersey is ‘tradizionalmente un red state’—“traditionally a red state” — and that the November election was “Super Tuesday” — when, in reality, Super Tuesday will not take place until March 3, 2020, and involves not state and local races but presidential primaries.

Missteps. Lack of research. Miscalculations (and missed opportunities). The same has plagued airplane press conferences, interviews with a certain atheist journalist, and other offhand remarks, causing unnecessary and blazing controversies (and conveying something a bit different, perhaps, than what was intended). It is great to mingle with the sheep, but it was this loosey-goosey style as well as a spiritual tin ear as well as liberalism that allowed an idol into the sanctuary.

Of course, there are those who argue it wasn’t really an idol. Said Monsignor Felipe Arizmendi Esquivel of Mexico, “In my previous diocese, when I heard with much affection and respect talk of ‘Mother Earth,’ I felt uncomfortable, as I said to myself: My only mothers are my mamma, the Virgin Mary, and the Church. And when I saw them prostrate themselves and kiss the earth, I was even more bothered. However, living with the Indians, I understood they didn’t adore her Mother Earth as a goddess, but they wanted to value her and acknowledge her as a true mother, as she is the one that gives us food to eat, the one that gives us water, air and all that we need to live. They didn’t consider her a goddess; they didn’t adore her; they only expressed their respect and prayed, thanking God for her.”

Yet the fact remains that the Amazonian culture could have been accommodated without a representation such as Pachamama. Indeed, Catholicism has sought from its very beginning to purge or Christianize such traditions or idols (one notes the many pagan artifacts, from the Christmas tree to bunnies and eggs, that were turned into Easter and Christmas), and as for “Mother Earth”: okay, to be fair, this was an expression used even in the Canticles of Saint Francis (the Pope’s namesake and founder of his order). Said Francis of Assisi, “Praise be to Thee my Lord for our sister Mother Earth” (Canticle 6).

But what discord has been sown (again). Look at the differing viewpoints even from exorcists: In Ireland four such priests issue a joint statement asking Catholics worldwide to dedicate December 6 as a day of fasting, prayer, and reparation “for the purpose of driving out any diabolic influence within the Church that has been gained as a result of recent events,” they said, “These events bring home the reality that we are in spiritual warfare, and that warfare is happening with the Church itself.” Added their statement, “In light of recent events regarding the Pachamama ritual in the Vatican Gardens, the subsequent procession of the idol into St. Peter’s, as well as placing the idols in St. Maria in Traspontina church, we are reminded of the words of St. Paul (1 Corinthians 10:20), “Do I say, that what is offered in sacrifice to idols, is anything? Or, that the idol is anything? But the things which the heathens sacrifice, they sacrifice to devils, and not to God. And I would not that you should be made partakers with devils.” In that same nation of Ireland, according to an Irish e-mailer named Mary Lehane, “Father Pat Collins, well known Irish exorcist, warned that ‘opposition to Pope Francis in the Church today is coming from the realm of darkness.’ He issued this strong warning at a Charismatic Conference in Charleville, Ireland, on Sunday November 10, adding that this is coming through Conservative Catholicism. He said Pope Francis is ‘listening to the Lord’ and people do not want to hear.”

Is a schism (or semi-schism) a real threat? Has the toxicity of political divisiveness entered the Church? If matters keep up as they have, and if (forgive us naming them) men like Father James Martin of the U.S. and a number of radically liberal bishops from Germany are not kept at more of a distance, it is not outside the realm of possibility. Is there room for hope? A priest-blogger (in a very intriguing post about popes and idols) notes, “The Church can get very sick indeed for relatively short periods of time, but she also always gets better. Naïve and sycophantic papal apologists refuse to see the first fact, and the anti-Catholic propagandists refuse to see the second.” Hmmm. Strong words. We ourselves can understand why so many are upset.

On the other hand, says another commentator, “the female indigenous leader who planted a tree alongside Pope Francis in the Vatican Gardens ahead of the Amazon Synod was clear from the beginning about the syncretistic and pagan meaning of the act which, she explains, was intended to “satisfy the hunger of Mother Earth” and reconnect with “the divinity present in the Amazonian soil.” We have been clear for many years about the danger of brushing up against the occult.

These “symbols” carry real (and dark) power. The Church needs to learn much (and also preach) about the occult. Here’s a real crisis no one addresses: There are more canon lawyers than exorcists.

As it has been pointed out, Pope Saint John Paul II (the Great) found himself in equal straits when he prayed with Hindus, Buddhists, and other religions or sects at Assisi (getting back to Saint Francis) and allowed a Buddha to be placed on an altar. We remember well that hot controversy. Perhaps the best approach was the straightforward one of Benedict XVI, who, visiting the voodoo territories Africa (Benin), simply implored them to cast the occultism out.

But here we are: in a crisis. Some now go so far as to label Pope Francis as the “false prophet” or even an “anti-pope” or “anti-Christ.” Others — including one in royal Catholic circles — have a different take. Said the very Catholic Archduke Rudolf of Austria, whose mother is currently under consideration for canonization, when questioned recently by a conservative Catholic newspaper about the dangers facing the world today, “This is my own feeling. I read a lot. I pray a lot. I discuss a lot. Basically, we must be close to the years of the anti-Christ, because everything is in a horrible state. Look at how the population and the people live: The materialism, which is one of the main dangers, has become the master of most of the souls of the world. This is a terrible thing! 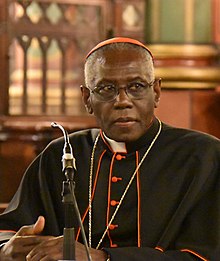 “Basically, I have the feeling that the devil is working now, if I can say it, like hell on the world, to destroy the Church.  And, obviously, he is helped by some people in the Church, also, which is very sad. We have to pray a lot and help the priests and the Church to change now and to become really Christian, in a way. And I think this Pope is doing his best to move the whole thing in the right direction, but I would hate to be in his place because it must be so tough.”

But let us ask the archduke: Does it have to be quite so tough? Can we not understand the upset in conservative circles (with which we identify)?

The upshot of the Synod has not yet been seen. We’ll know the result when we see what the Pope actually decides (as far as allowing married clergy). One notes that, thus far, he has not changed the Church’s stance on other hot-button issues. To make things more interesting yet, there is a report that the Pope has called upon an arch-conservative, Cardinal Robert Sarah of Guinea (Africa), who warns against criticism of the Pope, to help with the decision. We’ll wait and see.

The truth of the entire current situation of Roman Catholicism cannot be discerned in anger. The truth is discerned only in love. The truth (as well as deliverance) comes with donning sackcloth and fasting.

Notes Crisis Magazine, “Pope Shenouda III of the Coptic Orthodox Church is supposed to have said, ‘A Church that does not fast is not an apostolic Church.’ These words, real or imagined, stand as an apt critique of the current Roman Catholic Church.”

[Footnote: the Irish exorcists request for that December 6 day of fasting and prayer:

2.) take on some form of penance, such as fasting, abstinence and other forms of mortification;

3.) to offer the prayers to the Sacred Heart, as seen below.

May the Divine Mercy rest upon all of us.”