It started in the Middle Ages: masons building some of Europe’s most august structures (including churches) banded to form a union that grew into a cult and melded with the remnants of ancient occult organizations like the Knights Templars. The Templars, who once defended the Church, had spun into a secret organization that broke from the Catholic faith and absorbed the rituals of occult religions, including those of ancient Egypt.

While they seemed on the surface like nothing more than a social club (in America many prominent men belonged), some of the chapters in Europe were out to quash Christianity and were condemned by Pope Leo XIII in 1884.

While, in the years since, Masonic lodges have often resembled social clubs more than a nefarious band of occultists (in America one division is the seemingly harmless Shriners), the fact that they still use occult symbols and rituals, many based on Egyptian gods like Osiris, is cause for concern. They are known to don robes and practice arcane initiation rites that hearken to the oldest forms of witchcraft. The Masonic lodges were infiltrated by a supremely secretive organization called the “Illuminati,” who since 1776 had been fomenting societal disruptions and were spawned by a group that included banker Meyer Rothschild. They sought to form one-world government, and their branches were steeped in mysticism.

We’ll look at the world-government aspect at some future date, but for now let’s stay with the symbols. However innocent, exposure to occultism can leave a spiritual bondage and it might be the case that America needs to purge the occult Masonic symbols that have infiltrated the nation.

This is not to become paranoid: some see a conspiracy under every rock. Nor is it to condemn people. Many of those in Masonry had and have no idea of the occult implications, and are otherwise good and even religious men. Ben Franklin and presidents like George Washington, Andrew Jackson, Theodore Roosevelt, Franklin Roosevelt, Harry Truman, and Gerald Ford were Masons. 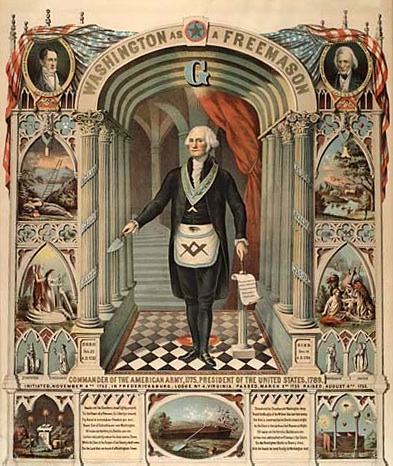 But Masonry is dangerous and as mentioned, may have left our nation with a bondage. On the American dollar bill (see below) was printed the “Great Seal” of the United States, and in the words of authors Michael Baigent and Richard Leigh, “it is unmistakably Freemasonic — an all-seeing eye in a triangle above a 13-stepped, four-sided pyramid, beneath which a scroll proclaims the advent of a ‘new secular order,’ one of Freemasonry’s long-standing dreams.”

Some have traced origin of the eye back to ancient Chaldea and its appearance as the eye of Jupiter, of Phoebus or Apollo, or even as the eye of Baal — the infamous pagan demon-god condemned in the Old Testament!

As Baigent and Leigh point out, when the very cornerstone of the U.S. Capitol was officially laid, the Grand Lodge of Maryland presided over the ceremony. On the cornerstone were placed corn, wine, and oil, symbols in Masonic rituals — which are dangerous because in secret they involve invocation of occult powers.

The gavel, silver trowel, and level used by Washington in the ceremony are today held by a Masonic lodge in the District of Columbia. The first White House also was of Masonic construction and ceremony.

And subsequently, the Capitol and White House were each to become focal points of an elaborate geometry governing the layout of the nation’s capital city, so as to produce octagonal patterns incorporating the particular cross used by Masonic Templars. As seen in the map below, the patterns are centered on the White House and the Capitol. Map of the city of Washington, 1792, incorporating modifications by Washington and Jefferson. Indicated are the octagonal patterns centered upon the White House and the Capitol, the octagon important to occult symbolism. Below, the all-seeing eye and the pyramid, which is used in many occult, New Age, and gay organizations and has cabalistic roots.