Was it a curse? Was it because he had wanted to be buried in the church he’d built? Was it the “mud” that had been unfairly slung at him? Or was it his missing ring? 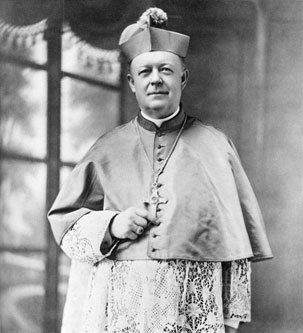 This is the mystery of a terrific “ghost” story unusual not only due to the number of credible witnesses — mainly priests — but because the ghost was thought to be Peter J. Muldoon, a stellar bishop who had been auxiliary of the Chicago archdiocese (right-hand man to the city’s first Catholic archbishop, Patrick A. Feehan) and soon after that became bishop himself in the new Diocese of Rockford, Illinois — which he started.

On his way to helping these two important dioceses form, and among other structures he helped design, Muldoon, while still a pastor, constructed an august,  cathedral-like church called St. Charles Borromeo on the city’s impoverished, immigrant-laden Near West Side in 1896. 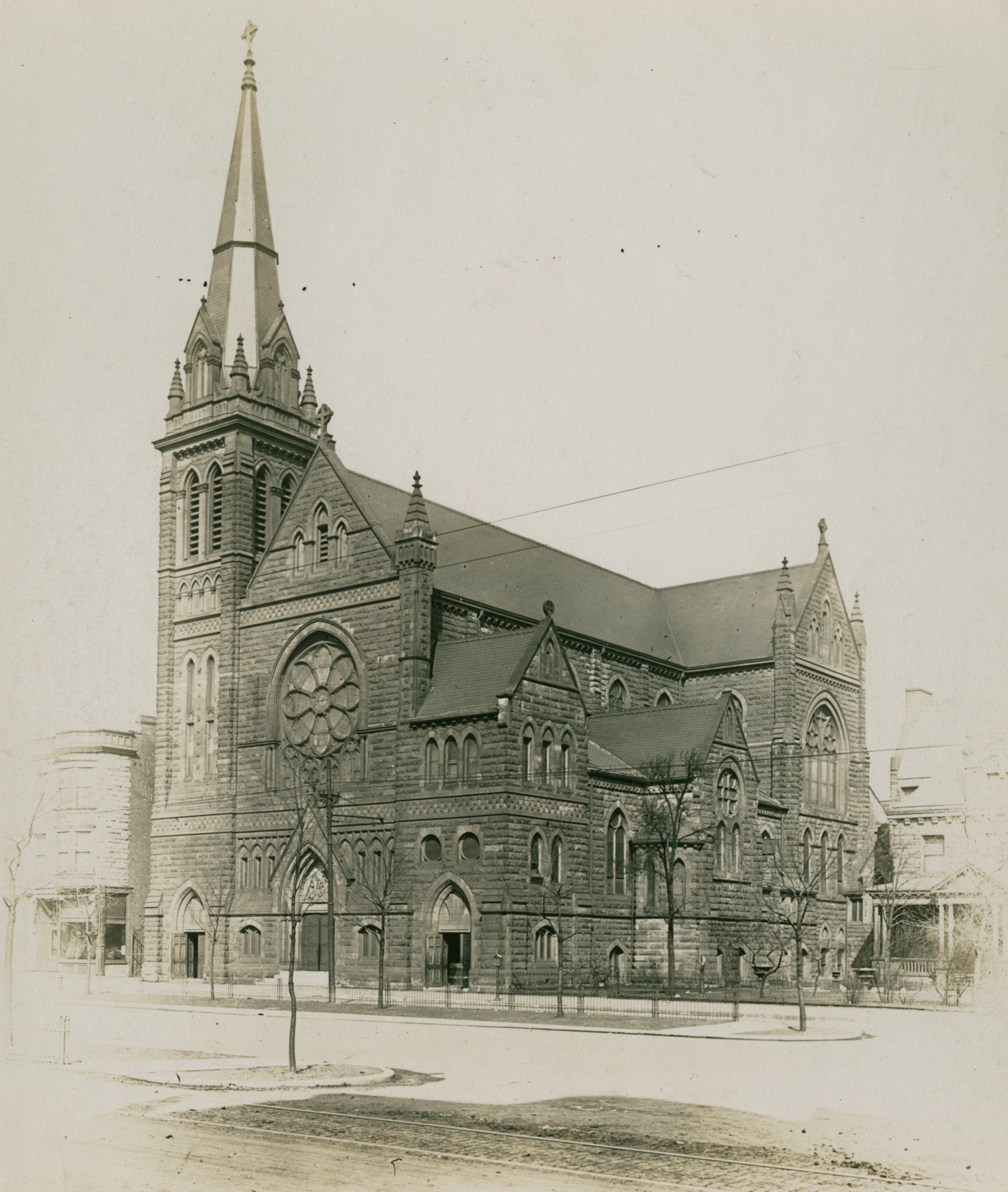 This was a pioneer of Midwest Catholicism — a good man by any standard — but after his death in 1927 there were developments at St. Charles Borromeo that would not have been to his liking — especially a pastor in the 1950s who had no time for spirituality and cared only for the weekly bingo receipts and a bogus shrine he promoted. There was the whiff of scandal and there also had been a jealous competitor who sought to malign him (and eventually the entirety of Roman Catholicism). Meanwhile, the monument Muldoon built — with walls two-feet thick in parts — lasted a mere 84 years before facing the wrecking ball, largely due to the poor shepherding of the pastor and transgressions within the building.

Soon after his death, and for decades after, Bishop Muldoon is thought to have manifested in the rectory and elsewhere at the Gothic complex — as if trying to save the church, clear his name, complain about where he was buried, or all of the above.

This is all told to us, adeptly, by a former priest there, Rocco A. Facchini, in his highly fascinating book, Muldoon, A True Chicago Ghost Story, which not only recounts supernatural occurrences but the inside working of a troubled parish (just before Vatican II) and the background of what was at one point the world’s largest archdiocese.

This is a story about the Church. This is a story about priests — headed for the brink (Facchini left the priesthood after the Vatican Council). This is the account of how an unsettled soul may at times be allowed to send signals, perhaps of displeasure — if indeed it was Bishop Muldoon (as virtually all witnesses believed) who was to haunt the rectory of St. Charles Borromeo, which before its demolition in 1969 was the talk of clergy for its strange happenings — witnessed also by a living bishop.

And so, while the official Church stays away from the issue of ghosts (or what some called “earthbound spirits”), there are plenty of priests who have their “war” stories.

Through history, the Vatican has focused on Heaven, purgatory, and hell — not any potential “in-between” territory (except for a while “limbo,” in the case of unbaptized infants). Yet many eminent Churchmen have written of their own experiences, and Thomas Aquinas himself was prone to belief. It was the Sadducees who said there were “no angels or spirits” (Acts 22).

Noted one eminent Church scholar, Sir Shane Leslie, “The Church forbids the dead to be evoked, but there is nothing to forbid the dead making the gesture themselves, since it is clear that only by Divine permission could they do so. Whether ghosts are miracles or not, Saint Thomas Aquinas accepts the apparition of the dead which he attributes to the special dispensation of God or else to the operation of spirits, good or bad.”

At St. Charles, the alarm in front of the tabernacle would go off for no reason — as if someone was stepping or kneeling in front of it. There would be loud footsteps when no one was around. Doors opened and closed of their own volition. Objects disappeared, then reappeared.

The earliest stories started right after Bishop Muldoon’s death: Assistant priests noted sounds from the third floor, and woke to groaning, and deep whimpering, coming from upstairs. “Other times,” says the former priest, “there were sounds like banging and pounding coming from rooms where no one was staying, as if someone were locked upstairs and trying to escape. The priests of the house eventually connected the racket coming from the third floor to Muldoon, revisiting his old chancery on Cypress. And so, the legend began.”

On one occasion, says Facchini, “suddenly and without warning a loud and thunderous explosion shattered the stillness. I heard what sounded like a locomotive crashing through the first-floor kitchen. The building shook violently, as if the entire rectory had been lifted off its foundation and dropped with a big bang. The walls moved and quivered, the furniture moved. Lights flickered off and then on again.”

It was no earthquake. Jolted awake, the young priest heard a “torrent of sounds,” like kitchen cabinets being ripped from the walls and dishware hurled against the walls. Yet when he and another priest dashed to see what it was, the sounds stopped “like a spigot” and they found nothing was out of place in the kitchen.

Three others in the rectory heard the disturbance, including the problematic, antagonistic pastor, who long had known of the ghost and was terrified (believing that Bishop Muldoon was out to get him; indeed, at one point a large picture fell for no reason just behind the pastor’s head, like a guillotine).

On another occasion, a priest armed with a purple stole, Holy Water, and the Rituale Romanum (tools of exorcism) went up the especially troubled third floor of the rectory and discovered a pyx with six old, yellowed hosts in a suit pocket there.

After he properly dissolved them in water and poured them into a sacrarium, the disturbances stopped – for a while. But later sounds were to such an extent as to convince even the most scholarly and skeptical of priests who stayed there.

The accounts — for decades — were almost beyond count. On yet another occasion, says Facchini, the priest passed the room of another priest and found the door open but the room dark inside. He headed up the hall to speak with the pastor and when he returned the lights were ablaze in the room he had just passed and the radio was filling the air with classical music — even though the priest had not yet returned (and wondered what was going on when he did).

Was it really the bishop? No doubt, there were things he would have greatly disapproved of, and when he built St. Charles, he had set aside a place behind the altar for his crypt one day. His body never made it there because once he became bishop of another diocese, he had to be buried in that diocese.

Waking up from strange occurrences one night (mysteriously, his door opened by itself), Father Facchin’s eyes immediately fell on a lit portrait of Bishop Muldoon in the hallway (placed there by the pastor in an effort to appease the ghost). This happening repeated itself precisely a month later.

Was it really the bishop — or someone (or something) else? Were there evil spirits? The church was built near an Indian burial mound. Any number of other entities could have been spooking the place — if we accept “hauntings.”

“For men of the cloth, it might be all right to joke superficially or to allude briefly to ghostly happenings,” says the author of this can’t-put-it-down, well-wrought account. “However, it is more comfortable to blanket unexplained occurrences with silence, avoid deep theological debate, and move on to safer topics.”

The Bible implies that ghosts are real when Jesus uses that very term (as opposed to “demons” or “unclean spirits”) and when we read, before that, in the Old Testament, the account of King Saul conversing with the ghost of Samuel; or of Moses appearing to Jesus and His disciples. Scripture also says, however, that we are not to initiate contact with spirits — warning strongly against this great danger.

It did seem to be connected to Bishop Muldoon. As we learn at the end, a young man and then a woman were to report seeing a pleasant elderly priest who smiled at them when they tried to say hello. They were stunned later to see a portrait of the bishop. It was the priest they had seen, sitting in what had been his favorite room.

In the event it was the good bishop there at St. Charles Borromeo, and in the event he needed help (if it was him, he may simply have been expressing righteous displeasure), let us at any rate pray for him.

He will know what to do with any prayers he doesn’t need.