[Despite everything — perhaps because of everything — many had a beautiful Christmas experience. Quiet. With a small group of family members. Reflective, hopefully. And full of hope in the face of, and despite, an epidemiological “tsunami.”

Remember that actual surge of ocean that struck fifteen years ago and was known as the “Great Asian Tsunami” (as this now seems to be from Asia)? We are reposting the following — the remarkable miracles in the wake of utter terror and destruction. It starts with an observation]:

There is something special about Indian priests. What is it about that country? There are very few Catholics there, but they are full of faith — strong Catholics. Maybe it’s all they have to go through there. They view the U.S. as fertile ground for Indian-Catholic missionaries!

Unlike many in the West, Catholics in India are prone to see matters from the perspective of the supernatural. They observe what just occurred there as a sign from God. Most recently, we touched base with Father P. Xavier, who pastors the Marian apparition shrine of Vailankanni.

While thousands on the nearby beach and adjacent buildings died during the recent tsunami, 2,000 attending Mass inside the church itself “miraculously survived” (in the words of an official shrine statement) when — as we earlier reported — the tsunami’s waves, rising as high as forty feet, smashed homes and hotels on the same elevation, but spared the shrine. “It was not damaged or anything,” says Father Xavier. “It did not even touch the steps of the shrine.”

He describes what occurred there as “something that is Divine providence.”

“There are so many cases of people thanking the Lord for the way they were taken away by the wave but then rescued,” the priest told us. “One man was pulled down and across 11 kilometers [before he was rescued]. It showed God’s providence.”

In fact, when a place is holy or when a person is prayerful, graces are stored in a spiritual “bank account” that often comes into automatic play during disasters.

At another holy site, where a basilica stands on what are claimed to be the remains of St. Thomas the Apostle, the water got no farther than a piece of a “miraculous post” the apostle was once said to have encountered. 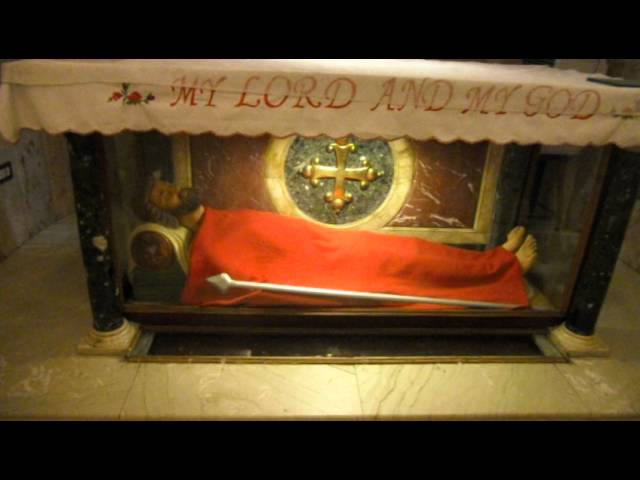 It was part of a log that villagers could not remove, and that was said to have fallen into a river, causing a flood.

As legend has it, St. Thomas came along and gave them the girdle from his waist, telling them to yank the log (which not even an elephant could pull) with it. The log was removed and a piece of it was mounted on a cement pedestal. “The sea did not touch our church,” said a priest at the Santhome Cathedral. “We believe the miraculous post of St. Thomas prevented the sea waters from entering it.”

When scientists went to survey the region, they encountered a third church, the Shrine of Our Lady of Matara in Sri Lanka, that was just a hundred yards from the beach. The wave washed away a precious relic, a 500-year-old statue of the Virgin Mary holding the crowned Infant Jesus [right], which was likewise said to have miraculous powers.

Three days later, however, the statue, which has been the catalyst, allegedly, for thousands of cures, was found in shoreline debris; Jesus was still wearing His golden crown and the statue was completely undamaged!

This is especially incredible when we contrast it with the reports from elsewhere. “It is terrible,” e-mailed one military man who was part of the humanitarian effort. “We sailed through a sea of the dead! Bodies everywhere, men, women, and children. The sea was slowly claiming them as we saw a shark slashing at one. As we got closer to the coast, the worst devastation could be seen. The giant tsunami wiped the coast clean, like a giant who had taken an eraser to a blackboard.”

That was Sumatra. Back in India, however, in the village of Batiagon, which is in the Jagatsinghpur District, there were just two buildings made of concrete: a church and a rich man’s house, said reports. The rest of the buildings were straw and clay. People rushed into the two buildings for shelter. About 300 people, both Christians and non-Christians, jammed into the church.

They cried out to the Lord for His protection.

“At around 11 a.m., a massive tidal wave thirty feet high slammed into the village, instantly destroying the shacks and sweeping away the rich man’s house,” said the report of this. “Witnesses inside the church say the wave seemed to split and go around both sides of the building. All 300 people who had taken shelter inside the church survived…. All the people in Batiagon village confessed that God had graciously saved their lives. The Hindus declared they would never again oppose Christianity.”