During this devout season of the year (really every season should be devout), a question — on devotions — arises:

Whatever happened to Our Blessed Mother’s request at Fatima for First Saturday devotion? In all the hullabaloo over the consecration of Russia, few have made a cause célèbre over her plea for the devotion, as expressed in the secret when she said:

“When you see a night illumined by an unknown light, know that this is the great sign given you by God that he is about to punish the world for its crimes, by means of war, famine, and persecutions of the Church and of the Holy Father. To prevent this, I shall come to ask for the consecration of Russia to my Immaculate Heart, and the Communion of reparation on the First Saturdays. If my requests are heeded, Russia will be converted, and there will be peace; if not, she will spread her errors throughout the world, causing wars and persecutions of the Church.”

That notion was expressed in 1917; the “great sign” occurred in 1938; by that time, it seems, it was already too late. A second world war immediately ensued; atheistic Communism spread like a virus around the world; there were horrid persecutions.

The critical time period: 1917 to 1938. The request was formally explained in 1929 after Mary again appeared to Sister Lucia. It’s unclear why Pius XI did not attempt a consecration (as far as anyone knows). Fatima was formally accepted in 1930. Pope Pius XII, who arrived after 1938, conducted a consecration — specifically mentioning “the Russian people” — but it lacked other requisites. Two other Popes would conduct versions of the consecration, and in the aggregate, they apparently fit the bill.

Yes, in a way, this too has been conducted. There are those who honor it monthly, along with First Fridays.

But has it spread to the extent envisioned by the Blessed Mother?

That we’ll leave for your considered judgment.

As a Marian priest named Father Donald Calloway (who has spearheaded devotion to Mary and Saint Joseph) has pointed out:

“Our Lady explained those Five First Saturdays to Sr. Lucia dos Santos, one of the Fatima visionaries, on Dec. 10, 1925, in the following way:

See, my daughter, my Heart encircled by thorns with which ungrateful men pierce it at every moment by their blasphemies and ingratitude. Do you, at least, strive to console me. Tell them that I promise to assist at the hour of death with the graces necessary for salvation all those who, in order to make reparation to me, on the First Saturday of five successive months, go to Confession, receive Holy Communion, say five decades of the Rosary, and keep me company for a quarter of an hour, meditating on the … mysteries of the Rosary.

Daughter, the motive is simple: There are five kinds of offenses and blasphemies spoken against the Immaculate Heart of Mary.

First: blasphemies against the Immaculate Conception

Second: against her Virginity

Third: against the Divine Maternity, refusing, at the same time, to receive her as the Mother of mankind

Fourth: those who seek publicly to implant, in the hearts of children, indifference, disrespect, and even hate for this Immaculate Mother

Fifth: those who revile her directly in her sacred images

Here, dear daughter, is the motive that led the Immaculate Heart of Mary to petition Me to ask for this small act of reparation. And, out of regard for her, to move My mercy to pardon those souls who have had the misfortune to offend her. As for you, seek endlessly, with your prayers and sacrifices, to move Me to mercy in regard to these poor souls.”

Continues Father Calloway: “Now, a lot of people have forgotten about the Five First Saturdays devotion, but it’s still relevant today — wars are still going on! We still haven’t seen the fulfillment of Our Lady’s promise that ‘In the end, my Immaculate Heart will triumph. The Holy Father will consecrate Russia to me, and she will be converted, and a period of peace will be granted to the world.’

“According to Sr. Lucia, St. John Paul II consecrated Russia to Mary’s Immaculate Heart on March 25, 1984. The USSR fell shortly afterwards. And yet there’s still not peace in the world. Why? Ask yourself: Have most of us been faithful to her requests, especially the First Saturdays of Reparation?” 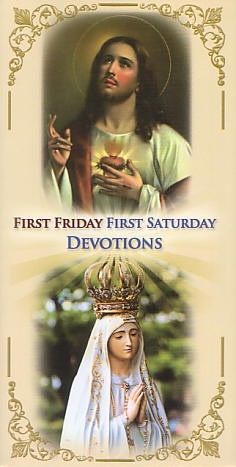