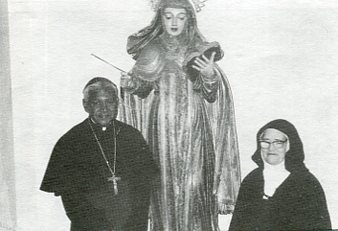 Back during the 1990s, we were sent a pamphlet entitled “Two Hours With Sister Lucia” [available here]. It was generated by an interpreter whose address was given as St. Anne’s Oratory in Fátima, Portugal, the transcription with many photographs of two meetings between famed seer Lucia dos Santos and two cardinals, a bishop, and a priest.

What it contained was jarring: According to the detailed, time-stamped transcript, on October 11, 1992, during the first meeting, at the Carmel of St. Teresa Convent in Coimbra, Portugal, when asked by Cardinal Padiyara of Ernaculam, India, the loaded question of whether, on March 25, 1984, Pope Saint John Paul II had finally accomplished a key request of Our Lady — consecration of Russia to her Immaculate Heart, which she told the seers would bring about the conversion of that threatening, atheist empire — the seer replied (as if expecting the question): “Yes. Yes. Yes. The consecration was already partially done. Pope Pius XII made it in 1942, on October 31, but it lacked union with all the bishops of the world, which Pope John Paul II finally managed to unite in 1984.”

This was a bombshell. For decades, aficionados of Marian apparitions have debated whether indeed the requested consecration was properly carried out when, in 1984, John Paul II consecrated the “world,” but in the prayer did not specifically name “Russia.” Few controversies in the field have been quite as red-hot. It remains a controversy to this day. Apparently, the Vatican long had been wary of overt mention, which would be seen as stepping on Soviet toes during this tense period of Cold War.

Yet there on October 11, 1991, was the only living Fátima seer answering the question in a way that was as unequivocal as it has been ignored.

Sister Lucia went on to explain that Paul VI had also made an attempt at consecration at the close of Vatican II, but that when she asked the Blessed Mother — who continued to appear or at least speak to her after the 1917 apparitions — Our Lady had said, “no,” that she had wanted the bishops to be in their own dioceses for the consecration (not all gathered at an event far from their flocks). 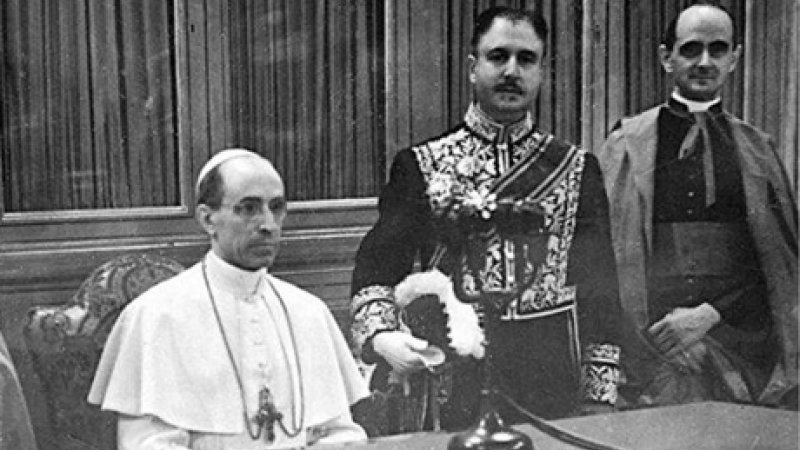 There was also an attempt at fulfilling the consecration, as spelled out at Fátima, by John Paul II in 1982 (at which Lucia was present), but this consecration lacked union with all the bishops, the seer told the cardinal [photographed top]. The 1984 consecration, on the other hand, had that union with bishops, said the seer, who with Bernadette of Lourdes and Juan Diego of Guadalupe is the most famous seer in the history of the Church and headed for all-but-certain sainthood. 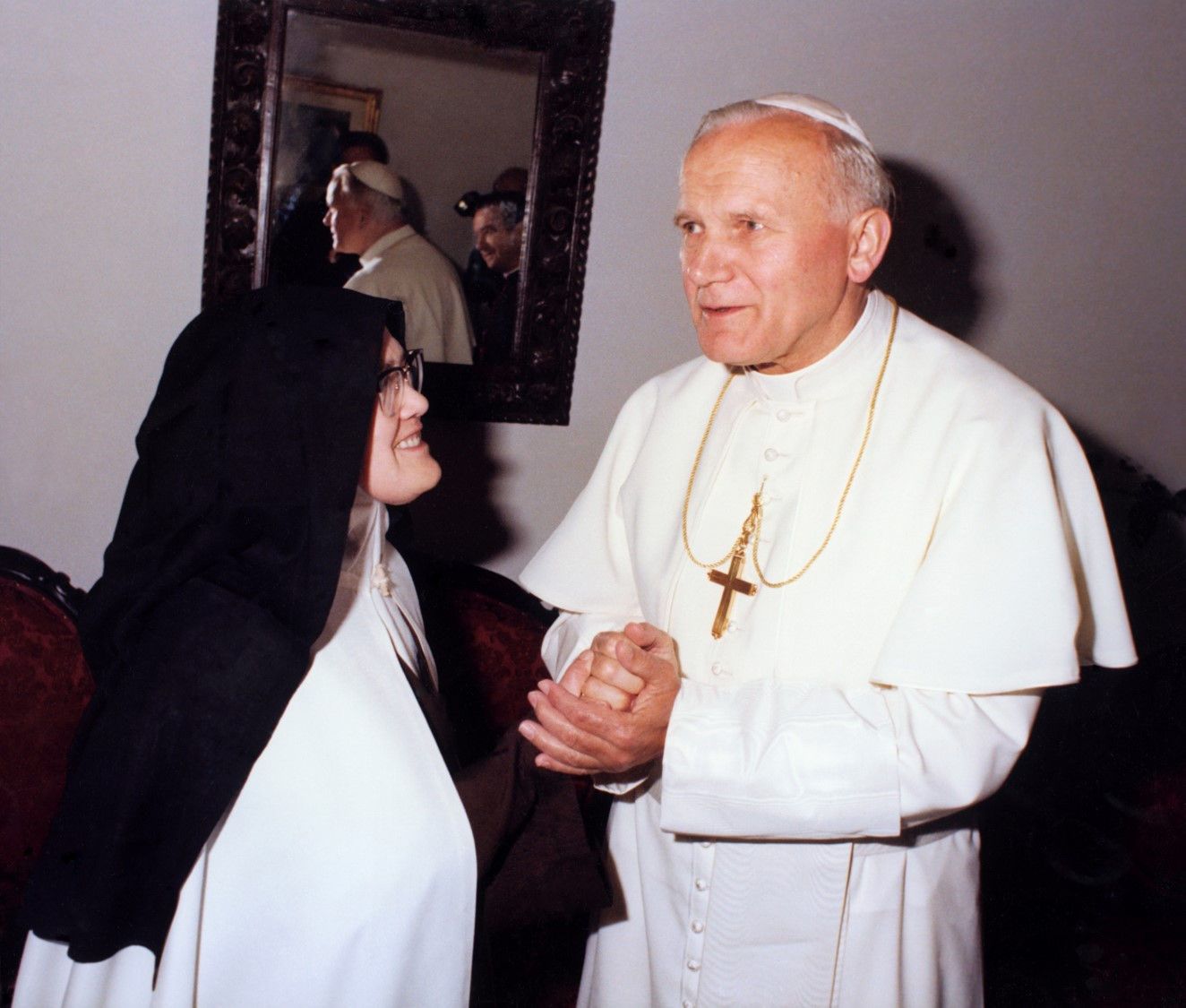 Even though Russia was not mentioned by name, said the cloistered nun, “God knew that the Pope’s intention was Russia,” as did the bishops. She told the cardinal, bishop, and priest that Our Lady never required that Russia be mentioned by name (the key sticking point in lingering controversies. We were asked about it during our recent webinar, one reason it comes to mind.).

Remarkably, just weeks after that consecration — on May 13, 1984, the Fátima anniversary — an explosion at the Soviets’ Severomorsk Naval Base destroyed two-thirds of all the missiles stockpiled for the Soviets’ Northern Fleet. It also destroyed workshops needed to maintain the missiles and killed hundreds of technicians. Western military experts called it the worst naval disaster the Soviet Navy had suffered since WWII.

The consecration was also followed, in an even more astonishing way, with the collapse in 1988 of Communism in Poland, followed in 1989 by the fall of atheistic Communism in East Germany, Czechoslovakia, Hungary, Romania, and Bulgaria. (Remember the “Berlin Wall” and the “Iron Curtain”?).

No state department specialist, no Ivy League academic, no political leader, and no television analyst would have dared to have predicted this.

Within two years, Communism was falling in the Soviet Union itself: Latvia, Lithuania, Estonia, Ukraine, Armenia, Azerbaijan, Belarus, Georgia, Kazakhstan, Kyrgyzstan, Moldova, Tajikistan, Turkmenistan, and Uzbekistan, followed by the fall of the Communist dictatorship in Russia.

No one expected such a thing in his or her lifetime — never mind a few short years. Albania and Yugoslavia soon joined the others.

Sister Lucia noted, during the 1992 meeting, that “the news speaks for itself.”

We respect those who have a contrary viewpoint. We report, you discern. Sister Lucia, during such talks, specifically singled out a Canadian priest, Father Nicholas Gruner, who she said needed to be corrected. 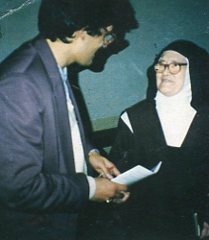 She further stated that the collapse of Communion in Soviet-held territories constituted a “period of peace” predicted during the apparitions if the consecration was accomplished. She said this peace pertained to the greatly lessened tensions between the Soviet Union (or now just “Russia”) and the rest of the world. It was a “period” of time that had been foreseen, she said — not an “era” (as many have interpreted the message).

Most remarkably, in a second meeting exactly a year later — on October 11, 1993 — she reportedly told Cardinal Ricardo Vidal of the Philippines and eight others (including two priests) that “the consecration of 1984 prevented an atomic [nuclear] war that would have occurred in 1985.” She said the Triumph of Our Lady’s Immaculate Heart had begun but was (in the words of the interpreter, Carlos Evaristo, above left) an “ongoing process.” [See his Youtube report]

As the Irish Democrat noted in a 1993 review of the translator’s work, “This 32-page pamphlet detailing a precise and accurate two-hour interview with Sister Lucia in 1992 [along with the 1991 conversation] is a must for all devotees and others interested in the apparitions of Fátima. Clearly from this meticulously recorded interview, many of the abounding theories surrounding these protracted controversies can now be discarded.”

And so we have something to consider as the debate apparently continues.