From Forums of the Virgin Mary [Translated]

The manifestations of the Child Jesus have been many throughout history, even in the consecrated host.

On the best known we have made some videos.

But there are some little known ones, which have not transcended the place where the events took place.

Some of these demonstrations have produced popular devotions that are still alive today.

And others have been to show His presence among us. Here we want to tell you about three surprising manifestations of the Child Jesus, little known, that will surely fill you with joy and admiration.

In Morelia, around 1774, there was an image of the Virgin with the Child Jesus in her arms, in a Mercedarian convent in Valladolid.

But there was a peculiarity, the Child Jesus had emeralds as his eyes.

So the beauty of the image lay in the expression of the child’s eyes.

And then a thief wanting to take the emeralds stole the Child Jesus.

As he led him out of the temple, he thought that everything had worked out for him.

But he wasn’t counting on the Boy in the wooden sculpture giving him a scare.

Suddenly the Child Jesus began to cry, with the strength of a small child when he knew he was far from his mother.

Then the surprised thief took out a knife, and threatened Him as if wanting to silence him.

But the Child did not shut up.

So he quickly pulled the emeralds out of her eyes because that was what he had stolen for.

And there the image began to bleed; tears of blood fell down his cheeks .

Then the frightened thief threw away the image of the Child and fled.

Meanwhile, in the temple, the priest noticed that the Virgin had been left without the Child and understood that it had been stolen, and together with the parishioners they went looking for him.

They found him abandoned with His eyes red, full of blood and without the emeralds.

The priest had a sister who was a religious who was dedicated to composing images.

So the father sent the image of the Child to Puebla.

When the nun found out what had happened, she preferred to leave the Child as He was, without placing His eyes in Him, to respect the miracle of the crying of blood.

And it was given the name of El Santo Niño Cieguito.

It was also covered with the symbols of the Passion of Christ: hair, a crown of thorns with three powers, a Cross in the right hand, and the two eyes in the left, to remember the desecration and outrages of which it was subjected.

Currently, the original image of the Blind Child can be seen in a window of the Capuchin convent in Puebla, surrounded by miracles and other votive offerings.

And miracles are attributed to Him such as the healing of eye diseases, and also the cure of cancer patients and other terminal illnesses. 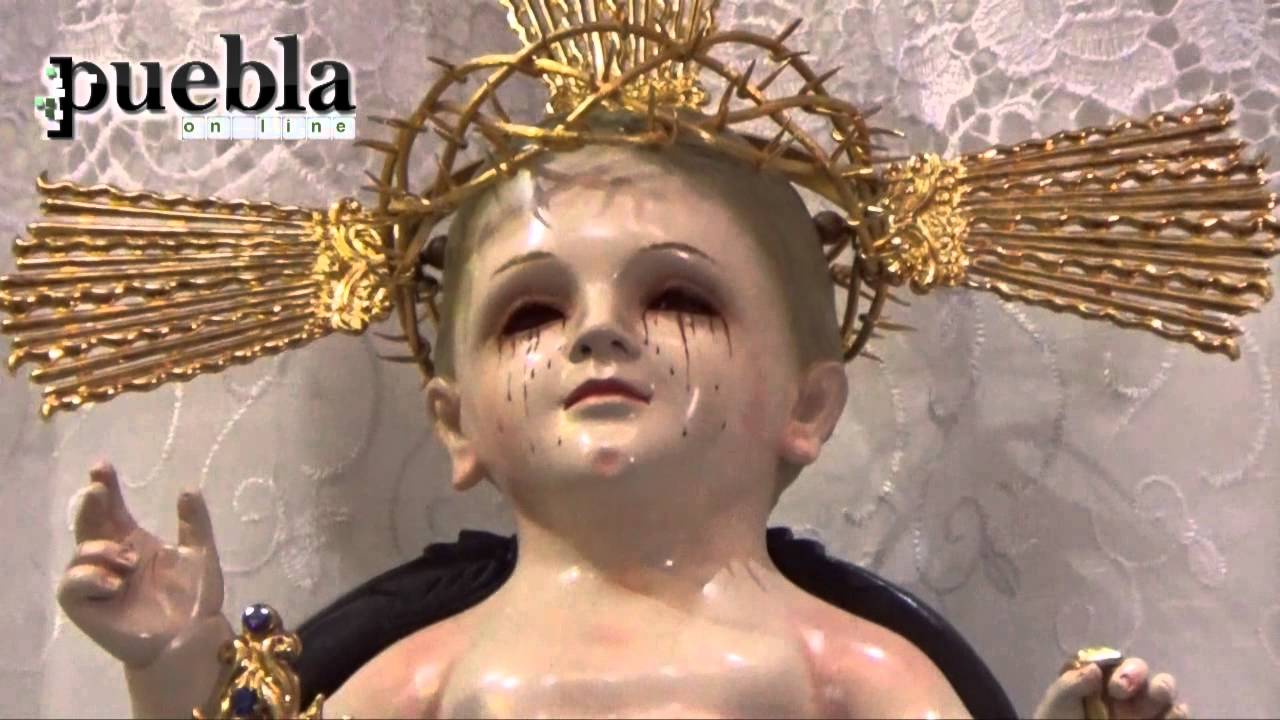 Every August 10, dozens of faithful come to this place to celebrate the Feast of the Blind Child , where they thank Him for the favors received and ask for others. [scroll for more]

Another supernatural manifestation happened in 1950, in Hungary, in the middle of the atheistic Communist regime, in a small town.

Atheistic Communist teachers loved to teach school children that God did not exist.

And in one class (Fourth A) was a 10-year-old girl named Angela.

The girl asked permission to take Communion, so her teacher, Miss Gertrudis, said yes, but not with much desire because she was a militant atheist.

From that moment on, her class became hell for Angela.

Her companions told their parents how Angela suffered for Jesus.

The teacher used to make all kinds of attacks to see if that way her faith would fall.

How was that possible, the teacher wondered?

Little by little, the class became a battlefield between the girl and the teacher.

And so on December 17, the teacher, wanting to make a game that would be a definitive blow to her faith, asked her the following questions:

“When your parents call you, what do you do?” asked the teacher.

“Perfect! You hear them calling and you immediately go like a good girl.

“And what happens when your parents call the chimney sweep?”

She did not imagine what her teacher was doing. The teacher’s eyes lit up like one who’s going to deliver a fatal blow.

Very well — said the teacher — the chimney sweep comes because it exists.

“But suppose your parents call your grandmother who is dead. Will she come?”

The girl said logically: “No, I don’t think so.”

“Well done! What if they call Little Red Riding Hood? What would happen?”

“Nobody will come because they are stories,” Angela answered.

And the teacher continued:

“Perfect, perfect. It seems that today your intelligence is loosening.

“Then see, my children, that the living, those that exist, respond to the call, said Gertrudis.

“On the other hand, those who are dead, those who do not live, those who have ceased to exist, do not respond. It’s clear right?”

The class answered yes at the same time.

So the teacher told Angela to leave class and asked the class to call her.

To which the thirty girls begin to scream her name.

And Angela returned, a bit stunned.

The teacher returned to her story. [scroll for more]

“Then we agree? When you call someone who exists they come and if they do not exist they do not come.

“Angela is alive, so when they called her she came over.

“Do any of you still believe in Baby Jesus is the question?”

The class is silent; a few shyly say yes .

And then he turns to Angela.

“And my daughter, do you still believe in the Child Jesus? Does He hear you when you call Him?”

So the teacher said, “Very good! We will experience it.

“If the Child Jesus exists, He will hear your call.”

So, everyone shout out loud: “Come, Child Jesus! At one, two and three …”

But everyone is silent.

The teacher tells them, “You see, they don’t dare to call Him, because they know He won’t come. It is just a myth. It is a story that no one takes seriously because it is not true! ”

But Angela suddenly stands in the middle of the class and starts saying to her classmates, “well we’ll call Him.”

The teacher was not expecting it.

And Angela insisted again. And the children screamed louder.

Then the door lit up, it appeared like a balloon, and out of it came a sweet and lovely child.

He had a splendid face, wore white, and looked like a little sun.

The Child just opened the door, looked, and then slowly closed it.

The girls did not — could not — speak.

While the teacher with her eyes bulging shouted: “He has come!” and ran away.

Angela then said: “See? He exists, now let’s give thanks.”

And praying an Our Father, a Hail Mary, and a Glory, they went out for recess.

The teacher did not return to class, and was admitted to a psychiatric hospital.

So much was his denial that it produced an internal shock.

While Angela continued in class as usual.

This story was investigated by the parish priest of the Church who questioned all the participants.

And he said that Miss Gertrudis kept repeating in the psychiatric hospital, “He has come, He has come”

Another surprising manifestation is that of the image of the Child Jesus of Luck.

Because the nuns who received it say they were lucky enough to have been given it.

The story is that some priests were walking in a meadow in Xochimilco, Mexico, in the year 1806.

They heard the cries of a baby and when they stooped they found the image of this Child.

They took him to the bishop.

And the bishop made a lottery to see which convent he stayed in.

In the first run, the convent of the Conceptionist nuns came out, but as they were very poor they decided to repeat the draw.

For the second time the same convent came out again.

Then the bishop said to remove the name of the convent.

So for the third time the Conceptionist nuns couldn’t come out.

However, when they took out the paper, it said in gold letters, “The Conceptionists.”

Then the bishop and everyone who was there knew that the Child Jesus wanted to stay in that convent.

Every year, on the second Sunday in January, hundreds of people gather to celebrate the feast of the Holy Child of Luck, Who is invoked to ask for a favor related to health, work, for women who cannot conceive.

And as thanks, they bring him toys such as balls, trolleys, stuffed animals.

And every year a picture of the child is raffled to remember the luck.

[resources: Forums of the Virgin Mary ]