A short while ago we had a “Special Report” on an alleged seer from Sievernich, Germany who, despite indications of diocesan support, and some reported interaction with two Popes, had flown beneath the radar.

Her name is Manuela Strack, and as we explained, she once met with Cardinal Josef Ratzinger after handing messages she claimed to have received from Mary — secret ones — to Pope John Paul II during a general audience the day before.

For what that is worth (and it is certainly intriguing), one of Manuela’s apparitions seems to have predicted — strikingly — the invasion of Ukraine.

“Indeed,” a scholar, Dr. Michael Hesemann, told us in an interview, “the first series of apparitions took place between 2000 and 2005, when Our Lady appeared as ‘Mary, the Immaculate,’ most of the times in the Parish Church of Sievernich, and delivered beautiful messages — but also warnings for the coming time of tribulations.”

In 2001, recalls Manuela, who resides in an old farmhouse (technically, in a nearby hamlet called Düren), “I saw Our Lady descending towards us on a golden ray. She then stood (as I see it) to the left of the altar. The Blessed Virgin wore a light blue cloak and a white dress underneath. The cloak featured gold trimmings at the hem. In her hands she held a golden rosary. She had folded her hands in prayer. Now she looked at us. She was standing on a cloud and had a golden rose on her left foot.”

The rest was reviewed in the “report.” It seems Manuela has had recent supposed messages (for discernment purposes solely), including, she claims, from Mary and the Archangel Michael.

One has to be cautious with such dramatic claims.

But we despise not the mystical and prophetic (seeing that the New Testament is largely based on both), and so a few more snippets from putative encounters since our “report” there in Sievernich.

According to the visionary’s website, the apparition of Michael occurred on June 13, 2022, in Sievernich on the property of what they call Jerusalem House (Fatima anniversary).

“Around 6.30 p.m. during our Rosary prayer in the parish garden, the church bells of the parish church of Sievernich were ringing when I saw a bright light in the sky towards the house of Jerusalem,” Manuela testifies on her website. “I go to the house of Jerusalem and I see a golden ball of light above the statue of St. Michael the Archangel in the sky. The sphere of light opens and Saint Michael the Archangel emerges from this sphere of light. His form is brilliant white. He wears a gold smaller crown with a cross on his head. His breastplate is gold. On the breastplate is a crystal cross.

“He holds his great golden sword up to Heaven. The sword bears the writing on the blade: ‘Quis est sicut Deus’ (Who is like God?). In his left hand, Saint Michael carries a white shield with gold lettering: ‘IHS.’ His sandals are golden, as are his lamellas [thin plates], which he wears over his white coat like a Roman soldier. A Cross can be seen in the middle at the end of each slat. He is dressed like a Roman soldier with a cloak held on his shoulders by two gold brooches.” 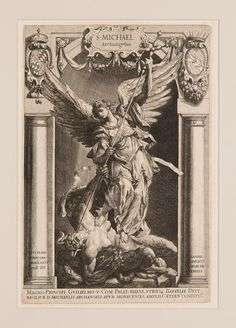 The great archangel supposedly told the seer: “I have come to you in the Name of the Father and the Son and the Holy Spirit. The blessings of the Father in Heaven, the blessings of the Son my Lord, and the Holy Spirit come upon this place and upon all who truly open their hearts. A difficult time will come upon you. Have no fear! There has never been a time like this on earth. Evil enters the hearts of men. They don’t look to the Lord. They fix their eyes on themselves and want to gain their advantage. If the Lord did not intervene, people would destroy themselves. There will be a war for the harvest.”

An interesting turn of phrase, that: “war for the harvest.”

The archangel then allegedly descended and put his right foot on the ground with the toe pointing towards the statue, doing a “half turn in the air.” The heel of his foot was measured at nine cobblestones from the statue and spanned three cobblestones.

When he re-ascended he said (in Manuela’s telling): “I set foot in Germany,” raising his sword to the sky. “And above his sword I see a book,” testified Manuela. “It is the Vulgate (Holy Scripture). The script opens and I see the Bible passage John 1:23 (“I am the voice of someone crying out in the wilderness. Prepare the way of the Lord, as the prophet Isaiah spoke.”).

The Archangel Michael then intoned: “Stay true to the faith of your fathers of Faith! The prayer of the Rosary in my honor is prayed by all the angels. Every prayer is a wing beat from me. The blessings of the Father, the Son, and the Holy Spirit be upon you and accompany you always!”

What are we to make of this?

Your discernment is as good as any (if done in prayer and fasting).

“Saint Michael the Archangel then went back into the sphere of light,” Manuela asserted. “It pulsates, gets smaller, and disappears.”

[Footnote: her website says this message “is announced without prejudging the judgment of the Church”]