[adapted from The Final Hour] 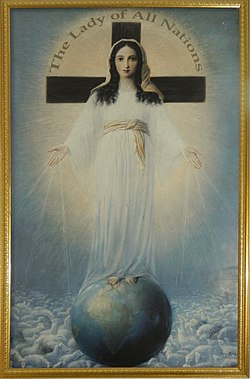 “A flood of punishments.”

The message was coming out of a controversial apparition in Holland where Mary was said to appear as “Our Lady of All Nations,” standing on a globe with a Cross behind her.

It was a series of apparitions that, like others, was met with negative reaction from the local cleric, and there did seem to be capacious room for skepticism. The visionary was a woman in Amsterdam named Ida Peerdeman, and she saw every conceivable type of calamity: storms, waves, missiles, quakes, palace intrigue at the Vatican, wars, and economic disasters.

Negative judgment was handed down by the bishop of Haarlem on May 7, 1956, confirmed in 1957 and 1972, though veneration was authorized by Monsignor H. Bomers, bishop of Haarlem, on May 31, 1996, and in 2002, his successor, Bishop Jozef Marianus Punt, reversed the previous discernments and directly approved of the alleged apparitions.

Said the good bishop recently, when controversy flared anew, referring to his 2002 approval, “I asked some theologians and psychologists to again study all the available material. On their positive advice, and in my responsibility as local bishop, I then approved the apparitions as ‘in essence consisting of a supernatural origin.’ In a pastoral letter, I added that the approval does not imply a guarantee on each word or image, because the influence of the human factor always remains.”

In addition to that bishop’s opinion (which some have taken issue with, arguing that he had no right to reverse previous rulings), there is the fact — the supernatural fact — that the image of Mary, as portrayed by Ida — with that globe and Cross — inspired the sculpting of a second one at a convent in Akita, Japan, that ended up exuding tears on at least 101 occasions starting on a Fatima feast day in 1973.

And there was the fact that Our Lady — as presented by Ida over the course of nearly four decades — hit on a number of predictions, including prophecies of a struggle in the Church, which certainly ensued after Vatican II, and the death of Pius XII, specifically in October of 1958.

These were, to be sure, impressive “hits.”

“Let all the children of men, of all the countries in the world, be one!” Ida quoted Mary as saying. “Seek and ask only for the true Holy Spirit. I have come to tell this depraved and degenerate world, all of you unite. I will lead all the dispersed flock back to one fold.”

Ida saw a “strange war” and supposedly heard the Virgin warn of “disaster upon disaster” caused by phenomena of nature. In Russia she saw a “hellish light” that seemed to explode from the ground upwards. (A prophecy of Chernobyl, or a simple concern in the wake of Hiroshima?) She saw a hand of heavenly protection over the Ukraine, and things would go well for a while, said Mary, but then she pointed to a globe that looked like it was ready to burst. Indicating the sky eastward, where there were many stars, she said, “this is where it will come from.”

A meteor? A comet? An asteroid?

Ida was later told natural disasters would overtake the world “from north to south, south to west, and from west to east.” She saw a rent that ran diagonally across the earth. Great misery and distress, she was told, were “imminent.” During an apparition on December 7, 1947, she saw thick clouds over Europe and titanic waves. “They will have to perish by the flood,” the seer putatively was told, which she was further informed would constitute the “desolation.”

That seemed to fly in the face of Genesis, in which God tells Noah that “never again shall all flesh be cut off by the waters of the flood; never again shall there be a flood to destroy the earth (Genesis 9:11).

Or was it a regional inundation, as opposed to a global cataclysm?

There were also premonitions of political upheaval, currency crises, boycotts, and economic warfare.

The apparition said Russia would try to deceive the other countries and Ida was shown a vision of “blue and white stripes intermingling and then stars. After that I see a sickle and then all things whirl together. Then I see the crescent and the sun. These too comingle with the rest. And finally sort of a buck or mountain goat comes jumping through the lot. While this is whirling around together, a circle appears on the left and through this the globe is turning. Now a big pointer appears and I hear the word, ‘The hand of the sun is going in the opposite direction.'”

She also saw “something like a cigar or torpedo” made of what seemed like aluminum and exploding to cause horrible effects — swollen faces covered with ulcers; obviously, a nuclear warhead.

Perhaps most interesting: she saw multitudes in the East — presumably Asia — and heard Our Lady say, “These he will rouse.”

There was a heavy cloud over India. There was a dark cloud over the Vatican. Endless scenarios! She saw a Pope and above him the word “VIOLENCE.” She saw a wolf standing before the Virgin, to her left. The “other spirit,” Mary supposedly said, was “infiltrating with dreadful success.”

Realism, Humanism. A new paganism — diabolical attacks no longer directed against nations so much as “the mind of man.”

A spiritual battle around the world — worse than a military one, she said, because “it is undermining mankind.”

And indeed one can find some veins of truth here. The “gates,” she said, were “opening.”

It was this apparition that is often cited as backing the long-proposed declaration of a new dogma declaring Mary as “co-redemptrix, mediatrix, and advocate” — a title Mary (as portrayed by Ida) all but insisted upon in Amsterdam (quite unlike her more demure demeanor in major apparitions).

A movement seeking such a dogma fell short of eliciting a positive public declaration from Saint John Paul II and Benedict XVI, who maintained silence, and Pope Francis, who, though, like John Paul II, known for an intense Mariology, dismissed the push for a new dogma, saying in surprisingly strong verbiage, “She never wanted for herself something that was of her son. She never introduced herself as co-redemptrix.” He called that “foolishness.” “No,” he insisted, not co-redemptrix, but “disciple.” Mary, Francis said, “never stole for herself anything that was of her son,” instead “serving him. Because she is mother. She gives life.”

Most recently, controversy has exploded over a European Catholic news site’s report that, on July 20, to use a translation of its words, “at the request of Cardinal Béchara Boutros Raï, Patriarch of Antioch of the Maronites, the Congregation for the Doctrine of the Faith (CDF), formerly called the ‘Holy Office,’ and clarified in a letter to the prelate the position of the Holy See regarding the visions of Ida Peerdeman.

“Although the Madonna appearances to Ida Peerdeman has, for some, many similarities with the Virgin appearing to Catherine Labouré in 1830 (globe under the feet, rays of light emanating from the hands turned downwards), the former Holy Office has confirmed a notification signed in 1974 which ‘considers that it is not opportune to contribute to the dissemination of the veneration of Mary as ‘Lady of All Peoples.’”

Supporters of Ida respond, as did one, “in the scan of the CDF letter, it nowhere appears that the apparitions to Ida Peerdeman have been declared ‘false.’ It seems that [a European reporter named David Murgia] over-reacted and has caused a serious misunderstanding by including the word ‘false’ in quotation marks at the top of his blog article. This was then simply repeated in French on [a Catholic outlet called] Aleteia (where, additionally, a portion of the CDF letter was mis-translated).

“In other words, it is clear that this does represent a refusal by the CDF to acknowledge the 2002 decision of Bishop Punt,” Peter Bannister from Cluny, France, wrote us. “This is certainly a major blow to supporters of the campaign for the Fifth Marian Dogma (including myself). However, the CDF’s letter to Cardinal Rai does not constitute a constat de non supernaturalitate [confirmed to be non-supernatural] and there is no reference to a new inquiry or new data since 2005. This effectively means that the case of Ida Peerdeman cannot logically be regarded as closed.”

There was no question that this was a well-meaning seer, and that promoters of her alleged mysticism are likewise well-intentioned. At the same time, there is no question that some of the images were strange and the lingo at times distinctly unlike Mary at places such as Lourdes, Medugorje, and Fatima.

It was an apparition that like others invited us to do as Scripture instructs: take what is good and leave the rest (1 Thessalonians 5:21).

All Christians needed to unite, said Ida, because the gate was open and a wolf was at the door.

[Note: argues an advocate for the devotion and dogma, theologian Mark Miravalle: “The recent private letter of the Nuncio regarding the Lady of All Nations, in light of the development of the position of the CDF itself, contains nothing new that would imply a necessary change in public devotion. The Diocese of Amsterdam has also not received any official letter regarding the apparitions or its devotion from the CDF, as is confirmed on the website of the diocese.” See his viewpoint HERE.]