Want peace in your life? Act angelic. It’s a key to happiness.

Not that I’m an expert on acting like an angel. But you know all those stories about “mysterious strangers” — what seem like angels in the flesh? They have one common denominator: the angels comport themselves in a joyous, giving manner — making the person they encounter feel bright and cheerful because they are bright and cheerful.

It’s a crucial lesson for all of us.

There are about a dozen times in my life when I’ve run into what I would call “mysterious” strangers. In most cases I can’t prove the events involved angels. They were simply fortuitous occurrences — odd because of how supernaturally uplifting or helpful and cheerful a “person” involved was. Most recently I ran into a “minister” who was walking his dog near a church I attend for daily Mass early in the morning. 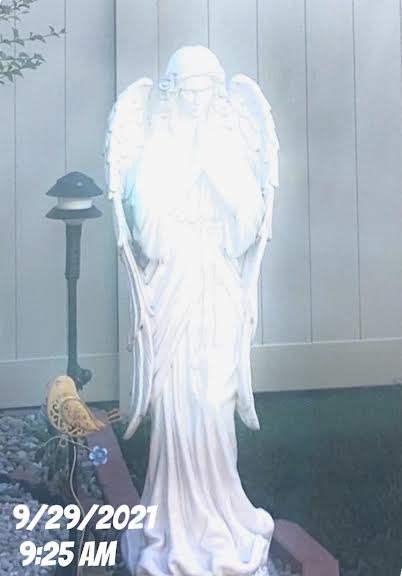 I have been going to this church for years, and had never seen this preacher before. At first I thought he was a priest. He wore a collar. And oddly enough, he cheerfully called out to me from across the street, telling me it was great to see someone “so faithful to God” so early in the morning.

As far as I was concerned, it was also great to see someone as terrifically and unforgettably cheerful as he was! At that hour of the morning — and on the rundown side of town — he had to be supernatural!

It was the middle of winter and freezing in Upstate New York. At first I thought he was just a nice guy who worked at some nearby Episcopalian or Methodist church. There was this brightness about him. He was as nice a “human” as I could imagine. He mentioned the pastor of my church. He said they were “good friends.” And as he passed my car, he suddenly said, with hardly a glance, “You better watch that tire. It looks like it’s going flat. They have an air pump at that station on the corner.”

He then smiled radiantly and walked off and I never saw him again.

To my surprise, when I looked at my car, he was right: the tire he indicated was almost flat. Had he not pointed it out I may well have become stranded on the way home (it’s a 13-minute ride) that cold day.

He was looking out for me. He was encouraging me. He was full of brightness — whoever he was.

We can do the same. We too can be encouraging. We can be “bright.” When we love, there is a radiance that shines through us. One way to start that up is to smile. When we smile (no matter how we may actually feel!), it transforms those around us. Do it first thing in the morning. That’s a challenge! It’s also important to be unusually polite. In the countless reports of mysterious strangers, angels are always full of generosity and encouragement. They are the paragon of friendliness.

When folks report angels, they say the angels made them feel like a million dollars. They teach us to make other people feel good (as the preacher that early morning did me). They teach us to be generous and even overly generous with compliments.

They teach us to let the other person ahead of us in line.

Criticism is contrary to holiness, and no one who spends his or her time looking for the faults in others is truly happy. The same is true of selfishness and disobedience — rebelliousness. So avoid that. Never judge. And look to see how you can help everyone around you. It might be visiting someone who is lonely. It may mean being extra nice at home. It might be simply praying for a passing stranger.

We get into this mode best when we reorient ourselves to centering on the concerns of other people instead of our own.

Do that and watch how the peace flows — for there is always peace in the company of an angel.

[Bookstore resources: The Trumpet of Gabriel]