On May 8, 490, the Archangel Michael appeared in what is now known as the cave of Monte Sant’Angelo, to report that God had made him the protector of that place.

And in his house, he had consecrated the altar, becoming the only altar in the world not consecrated by human hands.

Throughout history many miracles would occur there and the Church would build the largest sanctuary in the world dedicated to the Archangel Michael.

And it also instituted the Feast of the Archangel Michael on May 8, a celebration that much later was pruned from the Missal, as a consequence of the liturgical reforms carried out by John XXIII, subsuming this celebration in that of all the archangels, on September 29, which of course we just celebrated, but which bears further discussion.

Here we will talk about the wonders Archangel Michael performed on Monte Sant’ Angelo, the famous apparition and cures, and the value of the famous cave stones.

The Angel that the Lord sent to the prophet Daniel to inform him of the precise time in which the Messiah was to be born, and to instruct him in other great mysteries, speaking with him about what was to happen at the end of days, to prove the faithfulness of God’s chosen ones, in Daniel 12, had his most glorious appearances on Mount Gargano in southern Italy, which was named after him.

In the year 490, a rich man of noble birth named Elvio arrived at the mouth of the cave, which the Archangel Michael would later claim as his own, in search of a bull that had strayed from his herd. [scroll for more]:

At that time the cave was a sanctuary for a group of bellicose pagans, and when Elvio found his bull on the threshold of the cave, he was worried that the pagans would be angry, because the place was blocked by the animal.

Elvio tried to lead the bull back but it would not move, and he tried to kill the bull with an arrow, but the arrow came back on the archer and wounded him.

So he sought the advice of Bishop Lorenzo Maiorano who suspected something strange and ordered three days of prayer and penance.

At the end of the third day, on May 8, 490, Saint Michael appeared to the bishop and declared: “I am the guardian of this place.”

“I wish that this place be revered throughout the earth and be privileged. It is God Who has constituted me Protector and Defender of this place.”

So the bishop led his flock in procession to pray at the mouth of the cave, but they dared not enter the place where the pagans had worshiped their idols.

Then in 492, the kingdom was attacked by the pagan king Odoacre, and the Catholic army suffered an almost total defeat.

The Maiorano Bishop led his people to three more days of prayer and penance, redoubling the supplications and penances in honor of Saint Michael.

And Saint Michael appeared again to the holy bishop and assured him of supernatural help if he gathered the Catholic army to fight against the pagans. He told him that the attack on the Goths would be at the fourth hour of the day on September 19, 492.

And at the established time, lightning, thunder, earthquakes, and darkness prevented the advance of the enemy, who fled.

And to give thanks for this miraculous victory, San Lorenzo Maiorano led a new procession to the cave at the top of Monte Gargano, but they did not even get inside for fear of the pagans again.

But when the Pope of the time, Galasio I, learned of the apparitions of Saint Michael, who had revealed that he was the guardian of the cave, he ordered Bishop Maiorano to enter the cave and build a church there.

He gave orders to seven Bishops of the surroundings, who during three days of community prayers and fasting begged the Archangel Michael to deign to manifest the Will of God regarding the consecration of the Sacred Grotto.

Saint Michael welcomed the supplications and on the night of the third day, surrounded by a radiant light, Michael appeared for the third time to Saint Lawrence and said, “There is no need for you to consecrate this grotto, because I have chosen it as my royal palace. I myself have consecrated it.”

The next morning, Saint Lawrence narrated to the Bishops and the people the new vision and the heavenly message of the Archangel.

Then Bishops and faithful went in procession to the top.

And the Vatican Code tells us that some of the bishops were very old and Saint Michael wanted to meet them with a gesture of exquisite courtesy, protecting them from the sun’s rays.

In the grotto they found an imprint of Saint Michael on a stone block. 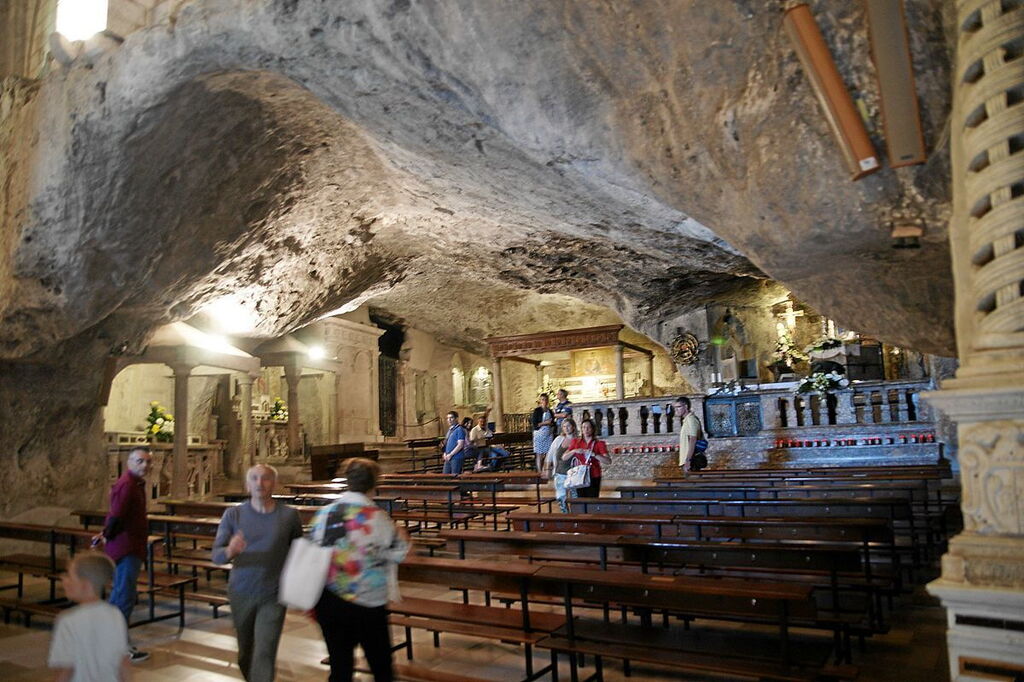 And an altar prepared by Saint Michael wrapped in a majestic red cloth, with a sparkling crystal Cross on it.

Everything in the grotto testified that his consecration had been divinely made.

Then Saint Lawrence presented the first Holy Sacrifice to God in the presence of all the bishops and all the people.

And it was said that Our Lady was also present on this solemnity, to thank the Most Holy Trinity for the favors granted to this part of the earth.

Already in the year 1655, the plague was unleashed throughout the Kingdom of Naples. Foggia was almost depopulated, and the black death was merciless also among the inhabitants of Monte Gargano.

It was then that Bishop Monsignor Alfonso Puccinelli resorted to the powerful intercession of Saint Michael the Archangel, going on a devout penitential pilgrimage with the clergy and the people to the Holy Grotto. [scroll for more]:

After long prayers, at dawn on September 22, the bishop saw the Archangel appear in blinding splendor. The angel told him, “Know shepherd of these little sheep, which I have obtained from the Holy Trinity, that anyone who uses with true devotion the stones of my grotto will keep the plague away from his house, from the city, and from any place, tell everyone about this Divine Grace.

“You will bless the stones, carving on them the Sign of the Cross with my name.”

And the plague ended.

As perennial gratitude to Saint Michael, the people of Monte Sant’Angelo erected an obelisk over the old town square, a monument that still exists as a reminder of this historical fact, with the inscription “To the Prince of Angels, winner of the plague, patron and tutelary monument of eternal gratitude, Alfonso Puccinelli.”

In this place, during the 13th century, Saint Francis of Assisi held prayer vigil outside the cave for thirty days and nights, feeling unworthy.

And Padre Pio, who lived nearby in San Giovanni Rotundo, would also make a pilgrimage there and sent the possessed to the cave of San Miguel, so that when they were inside the rock walls blessed by the angelic spirit of Miguel, the evil spirits that occupied their bodies would flee and the people would be released from possession.

The marvels in this regard were to the point where today some exorcists successfully use the stones of the cave in exorcisms, making the demons tremble.

Saint Bridget of Sweden also made a pilgrimage to the Cave and in one of her ecstasies heard the heavenly song of the angels. Jesus appeared to her saying, “The ungrateful will realize the loss they make by forgetting the angels, in the hour of trial.”

History recounts a prodigious healing: that of Saint Henry II, Holy Roman Emperor at the beginning of the 12th century, nicknamed “the lame one.” His leg was deformed, his limp humiliated him, and he prayed before every battle for heavenly help because he needed all the Grace he could get when in combat with more capable soldiers.

After an important military victory, Emperor Henry II went on a pilgrimage to the Basilica of Saint Michael on Mount Gargano. 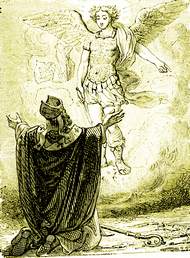 And one afternoon he felt called to spend the whole night in prayer in the cave, which he knew to be the only church in the whole world that had not been consecrated by human hands, but by Saint Michael personally.

In the dark Henry was lost in prayer when he saw two angels appeared as young men.

They took care of preparing the altar and at midnight he witnessed the procession of the nine choirs of angels towards the altar led by the Archangel Michael.

Then Our Lord and Our Lady came bathed in brilliant light.

The angels dressed Jesus in liturgical vestments and then Christ offered himself in the Holy Mass to God the Father.

Henry saw Jesus kiss the Gospels and after the Gospel was sung, Saint Michael approached him and handed him the Gospels to kiss.

Miguel then greeted him and said,

“Enrique, chosen by God, get up and joyfully receive the kiss that Christ sends you. I am Saint Michael, one of the seven spirits on the throne of God.”

And on that night, Miguel touched Enrique’s side with his angelic hand and pronounced that his member was completely healed.

Enrique then saw that his leg was completely restored and no longer limped.

And then Miguel sternly warned Enrique that he must never enter the basilica at night again, a warning that was passed down from generation to generation.