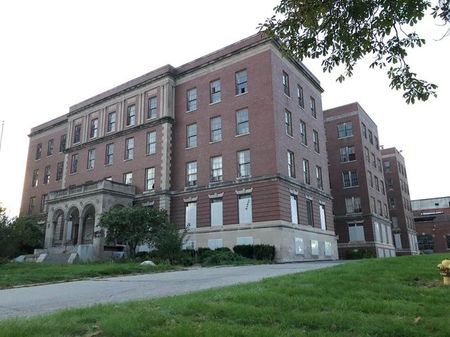 Interesting and uncanny: how many people claim bizarre happenings at abandoned hospitals, especially insane asylums. Such is true of the Eloise Psychiatric Hospital in Westland, Michigan. “Considered by some as one of the most haunted places in America,” noted the Detroit Free Press, “the sprawling former health complex was named in the late 1800s after Eloise Dickerson, the only child of a Detroit postmaster. In addition to being a hospital, the complex included an asylum, sanatorium, and cemetery.”

Oh yes, throw in a cemetery!

According to a local television station, several years ago a group investigating it claimed to have seen a spirit of a woman wearing white, often witnessed on the upper floors and roof. “Others have claimed to hear moaning, screams and roars throughout the old grounds — some believe they are the souls of tormented patients.” There once were ten thousand patients here, and in the psychiatric unit, certain patients were administered electroshock treatments. This was at a time when mental hospitals also performed lobotomies.

“In places like psychiatric hospitals, jails, prisons, there’s a lot of emotional energy that can stick around,” noted one man who investigated it. “People go through a lot of challenging, hard situations when they are in places like that and sometimes the energy stays embedded.”

We tend to phrase it differently — not so much in terms of “embedded energy” as phantasma that might be bound to earth, visiting from purgatory, on missions from Heaven, from hellish realms, or demons masquerading as the deceased. At one former Catholic sanitarium in Sylvan Springs, Indiana, we once spent an entirely unnerving night listening to inexplicable voices and sounds.

Souls at various levels of the afterlife interact with the living, some on missions from God—as sort of angels themselves—while others are confused or angry or trapped and in need of intercession.

Many cases come to us from nurses at hospitals—where of course so many people make the passage. This calls us to pray in special ways whenever we or someone we know is hospitalized — imploring protection from anything negative, casting out the “spirit of death” and anything evil, and petitioning God for the release of any souls in need of prayers.

The spirits in hospitals can be good or evil. It is never wise to “raise them,” though in some cases they may mean well and actually assist humans.

“I used to work in an old Catholic hospital,” noted one nurse on a major medical blogsite. “Where the labor and delivery unit is located now, it used to be the convent for the nuns that worked at this hospital. One of the nuns died of natural causes years ago. This nun loved and raised numerous varieties of roses. Ever since the obstetrics department was moved to this area, anytime a mother or baby is having difficulties you can smell the scent of roses throughout the whole unit.

“The obstetric nurses know to be prepared when they start smelling the scent. If a mother or baby dies, the room suddenly fills with rose petals. It is one of the creepiest but also most loving things that happens. I was standing in a room one night when the baby died. The room filled with white and pink rose petals. The rose petals just started floating down from the ceiling. It was like someone was just showering the room with them.

“This has happened several times over the years. I worked at another hospital where you would see a nurse in the old white dress and cap walk down the hallway and smile at you. Then she would walk into a patient’s room and apply wrist restraints. All the nurses knew her. It was just Mildred who died sixty years ago. You had to follow her so you could take the wrist restraints off.”

“We have had numerous reports from patients that they have seen a little boy,” noted another nurse of a similar situation. “This boy comes in their rooms, turns their call lights on and off and throws things on the floor. The facility used  to be an orphanage! Also, there are stories of an old-fashioned nurse in white dress and hat who would be seen going down the hall late at night doing her bed check and into someone’s room and stay there for a couple minutes if they were really sick or about to die.”

“I used to work in an old labor and delivery unit,” is another account. “It was a small hospital, so often times I was back there by myself. I liked to keep the lights low and things quiet back there, so naturally I heard a lot of creaks and groans. (Photo below, left, recorded in a Honduras hospital: a video allegedly shows a ghost peeking out from a doorway.)

“There was a whole unused back hall; there was also no access to it except by passing me. I could hear metal objects clanging, and doors shutting—like somebody was getting ready for a C-section.

“I could always sense something there with me (it seemed).

“There was also a back room on the med-surg floor that was never used. It was a patient room converted to a storage room and that room was strange: call light always going off, and nobody near it. The whole hospital had a creepy aura. Maybe it was the cemetery next door.”

Said a fourth: “We had a 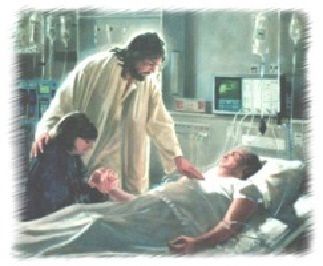 patient who was always on the call button. You know the type: the nurses have to take turns during the shift answering the call button so the primary can actually do other work. And this was a ‘frequent flier’ cause he was very chronic, very borderline, and the hospital was the only place he wouldn’t fluid overload.

“I work seven p.m. to seven a.m. He died at about eight. The look on his face was like, ‘how could you let me die!’ Anyway, the family came and were gone by nine p.m. and he was gone to the funeral home at 9:30 p.m. At about 10 p.m., the call button started going off. I was there—call button going off every five minutes.

“One of the nurses was a very spiritual girl. At about two a.m., after four hours of this, she snapped, ‘Enough!’ She walked down to the room and practically screamed into the empty room, ‘Mr. X, you have died. You can’t be in here bothering us anymore. Move along. In the Name of Jesus, I’m exorcising you from this plane of existence. Go to the light and be happy!’

“And I kid you not: the call button stopped going off then and there.”

[adapted from The Spirits Around Us, by Michael H. Brown]