In the mailbag are a number of afterlife accounts — what seem like contacts with the other side — that are submitted for discernment only (and hopefully for edification).

Some such correspondents request anonymity, concerned about ridicule, and we respect that.

“As a young man, I spent some time in the seminary, and for one year was sent to central Mexico, where I worked with a parish group,” writes a law enforcement officer from the Midwest. “I returned after ten years and stayed with the family of a group member named Carmen. One night, I was getting ready to sleep, sitting on the edge of the bed taking off my shoes in the dark. I became aware of a woman standing before me. She was white and transparent. I asked her interiorly, ‘Who are you?’ and she responded, ‘I’m Carmen’s grandmother.’ ‘What do you want from me?’ I asked, and she responded, ‘Tell Carmen that I love her.’ She then disappeared.

“The next day I asked Carmen what her relationship was like with her grandmother. She said it was cold, but respectful. I told her what happened, and she began to cry. I suppose that with great mercy, God sent Carmen’s grandmother back to plant a seed of love in the open wound of that relationship, so that it could be healed in Carmen’s heart. Perhaps only then would she have been able to enter her rest.”

Notes a reader from Houston:

“My family and I just returned home from a trip to North Carolina and I had an experience there that we felt should be shared.

“I am a convert of twenty-five years and in my past, I’ve experienced many untimely deaths — my own parents and siblings as well as many friends and acquaintances. It is a significant friend from the past that this story is about. 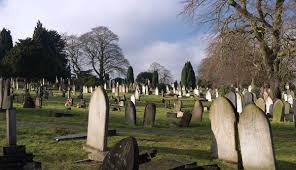 “My husband, sister, and I went to the cemetery in North Carolina where my parents and siblings and relatives are buried, to see if new flowers were needed. We decided to pray a Rosary at the graveside of my parents and on each mystery, we would walk to a different family member’s grave and offer that mystery for them (I believe it’s this part that opened the door for what would happen next).

“Once we finished the Rosary, we were going to leave to pick up some new flowers for the graves. Instead of leaving, I decided to ride down to a lake at that cemetery (something I rarely do because that’s a place my dad and I would go visit when he was alive and it can be a little sad at times).

“As I was driving through this very large cemetery my eyes were drawn to the crematorium section on the right side of the road (I usually look to the left, as I know our brother is buried there). As I was slowly driving by, my eyes fixed on a girl’s image on one of the crematorium plots.

“The best way to explain it is I felt a strong urge to stop the car.

“My husband and sister had no clue what I was doing and asked me why I was stopping. I told him I wasn’t sure and wanted to look at something. I then went straight over to the picture of the girl and in my heart I thought she probably needed the prayers, so I said an Eternal Rest and a Hail Mary. I’ve been praying for the poor souls for many years since my conversion, especially once I realized my parents and siblings and poor souls needed the prayers. It’s not uncommon for me to do this and to sprinkle Holy Water on the graves.

“As I turned to leave, I had to walk down a path away from the crematorium section that went directly to the car. The path was straight and there was really no reason for me to turn around at all but I did….

“As I turned back to the right, I saw what looked like an eagle on a plot and a name that just stopped me completely. I re-read the name — not believing my eyes. And then I went closer to make sure: It was the name of a boy that I had known for many years as a teenager.

“I just stood there and couldn’t believe it, and I’ll tell you why:

“I haven’t seen this boy in over thirty  years, never knew what happened to him or the direction his life had taken him. This cemetery in North Carolina is huge, and even if I knew he had passed away and tried to find him, it would have almost been impossible. There was no record of him at the cemetery at all; we checked after seeing his plot. The direction I drove that day is not one I always took and there were many other little reasons why this was unique in happening, but these reasons aren’t the main one that I grappled with.

“The most astounding part for me is that the night before, as I was lying in bed, an incident with this boy came to my mind during the middle of the night and had startled me. I hadn’t thought of him in years but rationalized that ‘Well, it’s because I’m back here in North Carolina and that’s why I’m remembering these events.’ Thoughts of this boy and some particular incidents flooded my mind that night (before the cemetery visit) and I couldn’t understand why. I eventually fell asleep and the next morning didn’t think of it at all, until I saw his name on the crematorium plot.

My husband, sister, and I were left a bit speechless. The most overwhelming feeling we took from it was how much God loves us. My friend had a very troubled life and he wasn’t Catholic but God knew one day I would be. God allowed this so that a Mass and prayers would be offered for him and also for the girl that initially attracted my attention.

“Indeed, the poor souls are alive and need our prayers, our family really believes this and we will continue to pray for them daily.”

In the mail too: Does the sun give signs from the other side?

Many report this, of course, mainly from sites of Marian apparition.

Others see it where they are.

Writes  Renie Dano of Hoquiam, Washington: “One spring evening I was driving home from a meeting for Eucharistic ministers when I noticed the sun pulsating. Suddenly the sun turned huge and spanned  the width of two blocks. Inside there was a large dove in the center of it. Then there was a hand, as if it were giving a blessing. Then an hour glass appeared in the sun with thousand of colored pixels draining out of the bottom of the hour glass. I kept watching and driving. I could not stop because there was no place to pullover. When I reached home I  grabbed my husband and daughter , and drove them out to the airport  which sits next to Grays Harbor bay. We got there just in time to watch the sun sink into the bay. From that day  I have been able to look at the sun and see it spinning and pulsating. I kept asking myself, ‘Why me?’ Three months later, when I was thinking about  absolutely nothing, I got the message, ‘time is running out.”

[Feedback: Let us note that while the Church allows cremation, and many good Catholics choose this option in an era where old-style burials have become so expensive — or simply to be less a burden on the living — one viewer, Deacon Tim Sullivan of Tulsa, Oklahoma, takes exception to the growing practice. “Two things virtually all Catholics don’t know about cremation,” he writes. “1. Cremation is not just a burning. The bones of the deceased have to be crushed by a machine, a grinder. 2. There is a constant theme in the Bible about the bones of the deceased. Basically, the bones are treated in scripture as containing the essence of a person’s holiness. This is the idea behind using bones as relics. Also why the bones of Jesus were not to be broken. Should add that the concept of the body as a temple of the Holy Spirit has been pretty much lost.”]