Creepy or holy? A hoax?
We speak here about the preserved corpse of a saint that supposedly “blinked” at a visitor recently?
It has to do with St. Inocencia, allegedly killed by father who (details on the saint are very uncertain) apparently was enraged when she embraced the faith, receiving First Communion. That was three centuries ago.
Originally in Rome, in 1786, her body was exhumed and acquired by a wealthy priest, her remains brought to the Cathedral of Guadalajara in Mexico.
The London Mirror, which made much of it, as did other newspapers, described a video clip of it as “terrifying” and it said that the corpse “bares her eyes for the first time in centuries during a film made by a visitor to the Cathedral of Guadalajara in Mexico, where she is kept. The corpse, which has been preserved in wax, looks straight into the camera during the eerie moment.”

“The short clip — which purports she has come ‘back from the dead — has gone massively viral with more than 800,000 YouTube views. While some viewers believe it’s a haunting display of paranormal activity, others say it’s all a cleverly designed hoax. One commentator says, ‘If you zoom in you can see he edited the image, the eyes are fake.’ Another writes, ‘Yes, it looks like her eyes open towards the end of the video but how can it be possible?'”

Now let’s be blunt. This is either a flagrant stunt, a holy miracle (the little saint giving a sign), or a trickster (spirit) trying, and successfully, to freak visitors out. You discern.

The cathedral, it’s noted (by latinflyer.com), is home to various altars, as well as the remains of three cardinals and multiple bishops (there’s even the heart of a Mexican president here). “But it’s the mummified remains of one little girl — known only as Santa Inocencia, or Saint Innocence — who attracts the most curious gazes, as well as some of the most passionate prayers from visitors,” it says. “The glass case containing her body, located near the front entrance of the church, never fails to attract attention.” 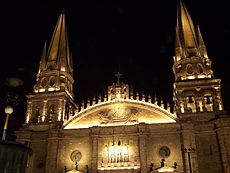 But as it turns out, the true story behind how Santa Inocencia arrived to rest publicly in Guadalajara’s cathedral is very much open to debate. According to one legend, when her father disappeared, neighbors discovered her body and carried it to the cathedral. By this rendition, she apparently was a local girl, still wearing the white dress for her First Communion.

“Another story — the one told on the small sign in the cathedral — claims that the remains of the little girl were taken out of a cemetery in Rome in 1786, and sent in 1788 to Don Vicente Flores Alatorre, a Catholic church dignitary who taught divinity at the Guadalajara cathedral. Flores gave the remains to the Agustinas de Santa Monica convent in Guadalajara. After the convent shut down, the Diocesan seminary began using the facility in 1869, and seminary members found the little girl’s remains in the chapel. The seminary was evicted and moved to the San Sebastián de Analco temple in 1915, taking Santa Inocencia along to the new location. When the seminarians were kicked out of that site too, in 1924, the Archbishop D. Francisco Orozco y Jiménez decided that the body should be moved to the Guadalajara cathedral. Santa Inocencia took her current place in the cathedral in 1925.”

In another version, she was tortured and killed by Roman Legionnaires when Christianity started to rise in Europe. However she died, she may once have been in the catacombs.